Celeb personal trainer Paolo Mascitti explains why you should aim to be the best version of yourself rather than aspire to have a body like the former Pussycat Doll.

If you’ve seen photos of Nicole Scherzinger’s abs and you want to mirror her diet and fitness routine to get the same result, her personal trainer has a message for you. Stop it. “It’s hard to say, ‘I want to look like Nicole, so I’m going to do exactly what Nicole’s doing,’” Paolo Mascitti tells HollywoodLife EXCLUSIVELY. “We’re all different.”

The Italian – who has been training the former Pussycat Doll for the past two years – has a very refreshing philosophy when it comes to fitness goals. “I have to treat all of my clients differently,” he says. “She’s been working out all her life. She has a certain body type. I would say just be healthy. Don’t try to compare yourself to somebody else. The best shape for you may be extremely different for Nicole.”

There’s a reason why Paolo tries to manage expectations when it comes to sharing The Masked Singer star’s workouts. Firstly, her routine is constantly changing. Secondly, the challenges that he sets for her are neither for beginners nor the faint of heart. “She’s been training all her life,” he says of the 42-year-old singer and dancer. “She’s extremely athletic. You have to keep changing [her] workout. It has to be challenging – not just physically, but also mentally. She doesn’t like [to] repeat very much. She likes to move around. She’s extremely powerful and you have to be aware when you’re training her. It’s like training an athlete.”

That said, there are some basic moves that Paolo recycles during his almost daily, hourly workouts with Nicole. The focus is mainly on HIIT, aka high intensity interval training – short repetitive bursts of full energy exercises. A typical session begins with a five to 10-minute run to warm up. He may then tell Nicole to use her hands to go from a standing position to walk out into a plank and back.

“We can do 12 of those. It can be followed by squat overhead presses [with dumbbells],” he says. Twelve reps of those can be followed by 12 squat jumps. “Then it could be a one minute run at medium intensity, just active recovery time. Then we start doing lunges with weights [holding a set of dumbbells]. Let’s say we do 16 – eight and eight – or 10 and 10 [reps]. Followed by jumping [forward] lunges. Go and run again, active recovery for one minute. Come back, repeat maybe three, four times.” The next day, he’ll switch up the routine again.

Many of the moves that Paolo describes can be seen in the above video compilation of Nicole’s workouts. But fans who want to exercise along with Nicole and Paolo can do so via the Playbook app. However, Paolo would much rather that people – including his many clients – focus on their own personal fitness goals and break them down into mini challenges rather than leapfrogging into working out for six hours a week. (For example, he recommends that beginners start with lighter weights and work out at a lower intensity.)

Paolo even has to make adjustments when he trains Nicole and her boyfriend (rugby player Thom Evans) in a joint session. The 35-year-old 6ft 2 Brit is focusing on gaining muscle mass and lifting heavy weights so his routine is completely different to his girlfriend’s. 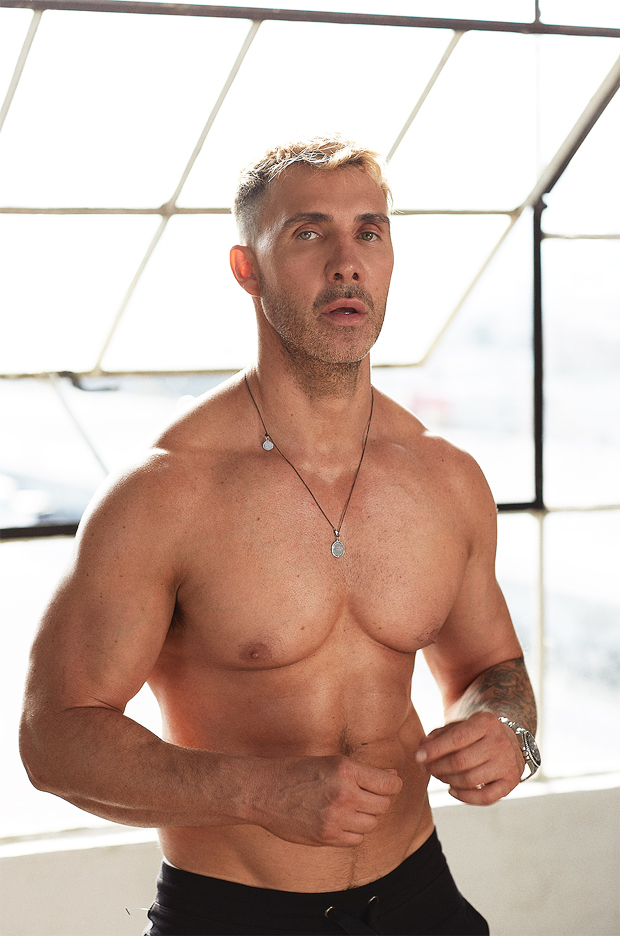 When it comes to eating, Paolo is similarly realistic. He encourages his clients to focus on a diet full of unprocessed, healthy foods, rather than restriction. Nicole’s typical daily plan, he says, includes an omelet or oatmeal in the morning, followed by a salad with salmon for lunch. “At night some form of protein that can be anything from chicken, streak [or] fish with vegetables,” Paolo says. “If she feels like she needs to have some sort of snack, she can have berries or things like that.” She occasionally indulges in pizza and ice cream, he says. “I don’t want my clients to feel extremely restricted in their life,” Paolo adds. “I want it to be a lifestyle they can sustain.”

Ultimately, Paolo believes being fit and healthy is doable, if you’re balanced, realistic and you focus on you and your goals. “There are not many things that we can control,” he says, “but being healthy is one them. And it’s very empowering.”