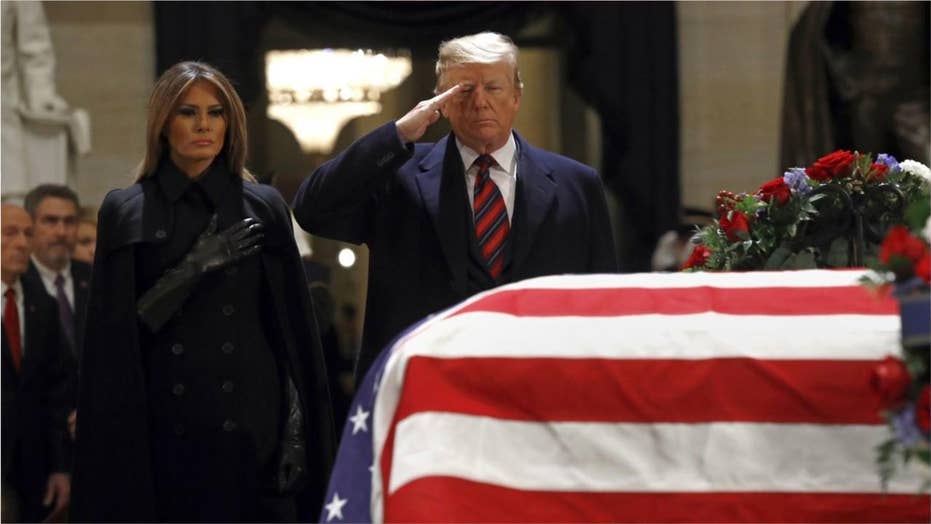 ABC News correspondents imagined President Trump’s vision for his own state funeral joking about what the current president would expect compared to the services for George H. W. Bush.

ABC News correspondents imagined President Trump’s vision for his own state funeral on Wednesday, joking about what the current president would expect compared to the services for George H. W. Bush.

“Probably a different tone in that funeral… first he’s going to choreograph it, so there might be more trumpets and fanfare,” ABC chief foreign correspondent Terry Moran said on the network's livestream of the Bush funeral.

ABC correspondent Devin Dwyer chimed in, “Yes, he would do it bigger, one would imagine.”

Moran then parroted what he imagined Trump would say, declaring his service would be “the best presidential funeral ever.”

“No one will ever have seen anything like that funeral,” Moran continued.

TheWrap, which quickly noticed the exchange, wrote that ABC’s coverage took an “uncomfortable turn” when the discussion shifted to President Trump’s eventual funeral.

Media Research Center vice president Dan Gainor told Fox News that Bush’s death “has to be seen through the eyes of journalists who use every single event to attack Trump,” but found the ABC News segment particularly appalling.

“To mock him during the coverage of the president’s funeral is just despicable garbage. I would say ABC News should apologize, but it wouldn’t be sincere if it did. This is about the billionth example of unprofessional journalism in their attacks on Trump. It’s only more outrageous because of the solemn occasion,” Gainor said.

Political comedian Tim Young told Fox News that the comments are the latest example of a liberal bias in the media.

“It's in bad taste to joke about any of our current leader's future passing,” Young said. “But what this highlights again is the media outrage double standard where you can say basically anything you want about a Republican and get away with it.”

Young said that public reaction would be much different if the ABC News reporters joked about Obama's potential future funeral.

“There would have been full blocks of TV dedicated to 'how disgusting they were' on CNN and forced apologies from their own network,” Young said.

The awkward moment began when the network’s livestream was waiting for the plane carrying H. W. Bush to depart from Joint Base Andrews following the 41st president’s emotional funeral service at the Washington National Cathedral. The ABC News hosts, seemingly attempting to kill time, called Trump’s presidency “different” than Bush's.

“It is, in fact, a repudiation of much of what George Herbert Walker Bush and George Walker Bush stood for, because the people who voted him wanted that repudiation,” Moran said.

Bush, who died late Friday at his home in Houston at age 94, was memorialized Wednesday during an emotional funeral service at the Washington National Cathedral.