It wouldn’t be The Bachelor without a hefty dose of drama. This season is already delivering on that front, especially thanks to the fact that some of this season’s drama began before anybody even stepped foot in the Bachelor Mansion. It turns out, two of the contestants, Alayah and Victoria P., have a pre-Bachelor history from their pageant days, and it became a big deal in the Jan. 20 episode.

Both Alayah Benavidez and Victoria Paul were vying for Peter Weber’s heart during this season of The Bachelor, but that’s not the only thing they have in common. The two former pageant queens also both competed in the 2019 Miss USA beauty pageant; Alayah was Miss Texas and Victoria P. was Miss Louisiana. Based on social media, it seems like the two were friendly during the competition. Alayah posted an Instagram album from her time at the national pageant, captioning it: 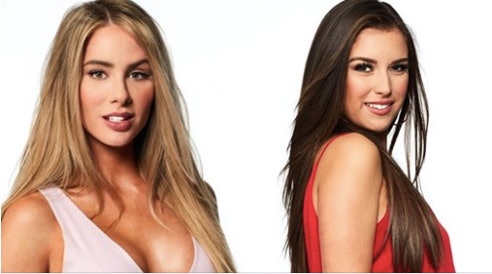 Alayah and Victoria were a little less friendly with each other once they started competing for Peter, though. During the pool party at the Bachelor Mansion, Peter asked a few of the women what they thought of Alayah. A lot of women said she seemed to be putting on an act, including Sydney Hightower, who had an especially intense pillow fight with her during the group date. When it came time for Victoria P. to voice her opinions, she told Peter she didn’t spend very much time with Alayah during the pageant, but she revealed Alayah asked her not to tell Bachelor producers they knew each other. Victoria told Peter she thought that was a little suspicious, and it made Peter question even more whether Alayah was on the show for the right reasons.

The Miss USA history between Alayah and Victoria P. might remind a lot of Bachelor fans of a similar dynamic from last year’s Bachelor season. Hannah Brown and Caelynn Miller-Keyes were both contestants during Colton Underwood’s season, after they competed against (and roomed with) each other in the Miss USA 2018 pageant. There were "a lot of hurt feelings" between them, which carried over into the show. Though it seems things are less personal this time around, Alayah and Victoria P.’s backstory definitely brings what’s now basically the prerequisite Bachelor beauty pageant drama to this season.