A titan of television has fallen. Alex Trebek, who has hosted ‘Jeopardy!’ for more than three decades, has died after being diagnosed with stage 4 pancreatic cancer.

Alex Trebek, a legend of television, a pop culture icon and a man synonymous with the game show Jeopardy!, has died. The host passed away after he revealed to his fans that he had been diagnosed with stage 4 pancreatic cancer in Mar. 2019. While Alex had vowed to fight the disease, even he admitted that he was facing a low “survival rate” of 7%. Sadly, he was correct, as he succumbed to the disease on Sunday, Nov. 8.

“Jeopardy is saddened to share that Alex Trebek passed away peacefully at home early this morning, surrounded by family and friends,” a spokesperson for Jeopardy! said to TMZ in a statement. The Canadian-born host passed away peacefully at home surrounded by family and friends. Despite his illness, Alex did not retire from the long running game show and continued to host. 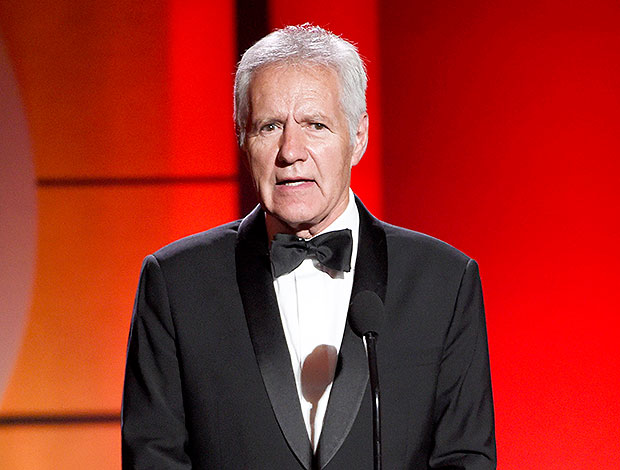 Alex chose not to hide his diagnosis from the public, choosing instead to reveal his cancer in a video to all his fans. “Hi, everyone,” Alex said on March 6, demonstrating his trademark tone of voice that was half “supportive high-school teacher,” half “encouraging grandfather.” “Now, just like 50,000 other people in the United States each year, this week I was diagnosed with stage 4 pancreatic cancer. Now normally, the prognosis for this is not very encouraging, but I’m going to fight this, and I’m going to keep working…Truth told, I have to! Because under the terms of my contract, I have to host Jeopardy! for three more years! So help me. Keep the faith and we’ll win. We’ll get it done. Thank you.”

For a moment, it seemed as if Alex was going to be among the rare few who beat stage 4 pancreas cancer. At the end of May 2019, he told PEOPLE magazine that he had reacted exceptionally well to chemo, and that his tumors had shrunk by 50%. “The doctors said they hadn’t seen this kind of positive result in their memory,” he said at the time, adding that his doctors said he was at “near remission” levels.

The man George Alexander Trebek in Sudbury, Ontario, Canada has been a staple of evening television for close to forty years. After starting his television career in 1963 by hosting a Canadian music program called Music Hop, he relocated to the United States in the early 1970s to host The Wizard of Odds. In 1974, he hosted the popular High Rollers until its cancellation in 1980. While appearing in a variety of shows, Alex would get his biggest break in 1984, when the late Merv Griffin tapped him to host the 1984 revival of Jeopardy!

“If I hadn’t gotten the job hosting Jeopardy,” he told The Daily Beast in 2017, “I would probably have continued in the same business and might have hosted other game shows that would have been canceled many, many years ago, but I got lucky and winded up with this program. Keep in mind that I’ve been in broadcasting for 55 years now, so it’s not like it just came about suddenly.”

Alex floated the idea of retiring in 2018 while speaking with Harvey Levin on OBJECTified. “[I] mentioned to our producer not so long ago that the fellow who does the play-by-play for the Los Angeles Kings [Alex Faust], they should consider him,” Alex said when bringing up as a possible replacement. He also suggested attorney Laura Coates – a graduate of Princeton University’s Woodrow Wilson School of Public and Internal affairs and the University of Minnesota Law School – as another person who could take over the show for him.

Prior to his passing, Alex Trebek was married twice. He and businesswoman Elaine Callei were wed in 1974. They divorced in 1981. Nine years later, he and Jean Currivan, a real estate project manager from New York, tied the knot. The two had two children together – son Matthew and daughter Emily. In 1998, the Canadian-born Alex became a U.S. citizen.

Despite being a television icon, Alex always stayed humble about his placement in the annals of pop culture. “Oh, the show will go on without me,” Alex said to The Daily Beast. “Bob Barker has retired and Drew Carey is doing a good job on Price. Monty Hall, my good friend, died [in 2017] and Wayne Brady is doing a good job on Let’s Make a Deal. So, there will come a time when Pat [Sajak] and I [retire]—I’ll probably leave before Pat does, because he’s younger—and somebody else will come along and replace us. No problem.” While there will be another host on Jeopardy, there will be no replacing Alex Trebek.