Amazon is leaning hard on Google.

According to new data from advertising agency Merkle, Amazon has ramped up the number of Google search ads it purchases to drive traffic to its website during the holidays this year.

While the jump in ad spend isn’t surprising during the advertising-heavy fourth quarter of the year, the timing of Amazon’s ad spend is intriguing.

“In each of the last two years Amazon’s text ad impression share has grown steadily throughout the holiday season, with only modest increases around Thanksgiving,” wrote Merkle’s Andy Taylor and Mark Ballard in a blog post.

Moreover, the company predicts that if Amazon continues to invest at the same pace in coming weeks, this year will mark Amazon’s largest investment in Google text ads to date.

Read more: Amazon’s ad sales are up 150% in just the last month — and it looks like it will be a happy holiday season for Google and Facebook, too

Here’s a look at Amazon’s ad spend between November 1 and Thanksgiving compared to Merkle’s group of retail clients: 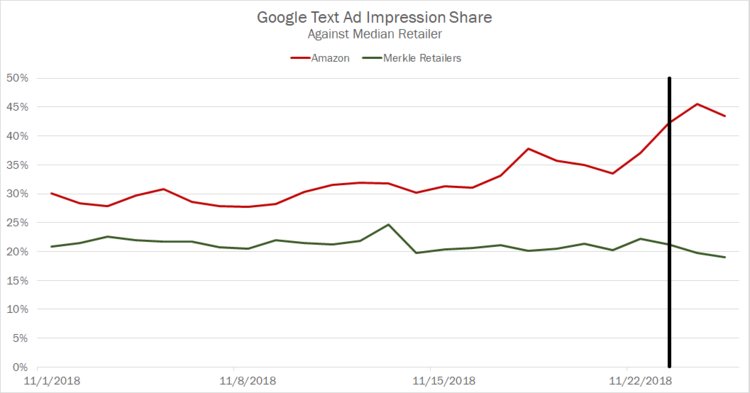 But Amazon is cutting back on Shopping ads

Amazon’s is buying more Google’s text-based ads to drive traffic, but it’s not investing the same in Google Shopping ads, according to Merkle. Shopping ads are a prominent ad format at the top of search results that includes product photos and links to let consumers comparison shop.

Amazon’s share of Shopping ads has “increased modestly since mid-November, but the retailers studied are seeing more much significant growth in their own impressions share during the same time frame,” wrote the Merkle execs. 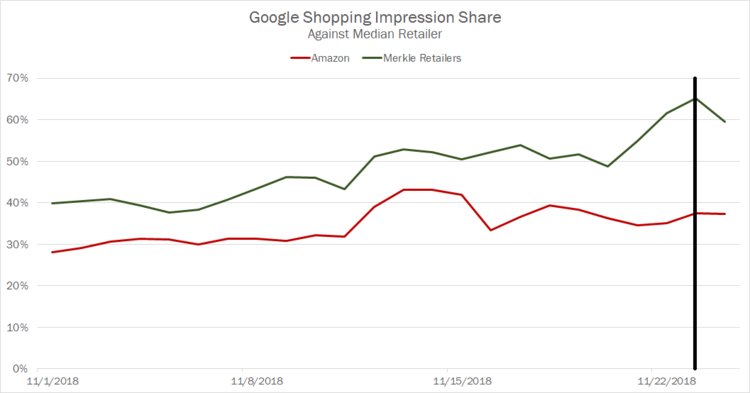 “This seems to indicate that the auction changed over the past couple of weeks to organically increase impression share for advertisers,” reads the blog post. “As such, the data indicates that Amazon itself doesn’t seem to be getting significantly more aggressive in the Shopping space, and may even be dropping off slightly relative to other advertisers.”

During the week before Thanksgiving, retailer sales tied to clicks on Google Shopping ads grew 45% year-over-year, reports Merkle. Black Friday sales were up 41% while Cyber Monday sales rose 42% in the same time period.

In general, brands are increasingly investing in Shopping Ads, and Merkle separately recently reported that ad spending on the format has grown 40% year-over-year this quarter.

Amazon has a rocky history when it comes to Google Shopping ads, partly because commerce advertising is an area where Amazon and Google compete.

Amazon does offer a similar ad format to Google Shopping ads called sponsored product ads that are keyword-based placements within search results. In September, Amazon consolidated its advertising business into one brand with the goal of making it easier for advertisers to understand but buyers said that the move didn’t necessarily help them understand Amazon’s complex advertising options.

This is a subscriber-only story. To read the full article, simply click here to claim your deal and get access to all exclusive Business Insider PRIME content.