Charlie Lawson has furiously hit out on Twitter after having his milk stolen. The Coronation Street legend jokingly threatened to rip the person responsible’s “arms off”.

The Jim McDonald actor also tagged where he lives as Prestbury in Cheshire.

Charlie said he was “angry” and did not hold back in the posts, before also answering a number of replies.

The Corrie star initially posted two days ago: “To the little s**t in our village @PrestburyParish who keeps nicking our milk, missed you by a whisker this morning! 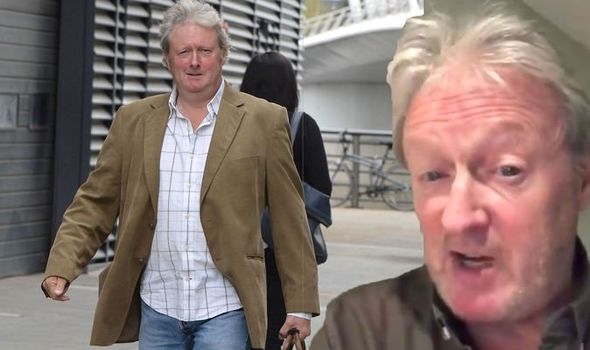 We will use your email address only for sending you newsletters. Please see our Privacy Notice for details of your data protection rights. Jack P Shepherd addresses awkward Coronation Street moment ‘No idea’

It quickly garnered attention and was liked almost 500 times.

“Jeez Charlie, haven’t you the great way with words,” one user replied.

“Makes me angry,” he got back. “As someone said, knock on me door and if you’re that desperate, I’ll do you a cup of tea meself!”(sic)

One fan cheekily wrote, referencing his alter ego’s catchphrase: “I stole Charlie Lawson’s milk AND ID DO IT AGAIN SO I WOULD.”

A third said: “Only up and just wondering… any word this morning on @charlie_lawson1 milk?

“Or indeed anyone attend the local hospital @prestburyparish with broken limbs?”

Charlie then joked: “No order this morning, but ‘gin traps’ set. Big day tomorrow though!”

A gin trap is a mechanical device designed to catch an animal by the leg using spring operated jaws.

The use of gin traps has been illegal in the UK since 1958.

Express.co.uk has contacted a spokesperson for Charlie Lawson asking for comment.

Charlie went on to retweet: “Exactly right… must be desperate to steal milk from a neighbour’s doorstep…

“Can just see the scene now, someone knocking on your door at 8am on their way to work… ‘Make us a cup a tea n a bit o soda would you Charlie.'”

The star rose to fame on the cobbles, first appearing as Jim back in 1989.

Charlie remained a regular character for the next 11 years, and has popped up on numerous occasions since.

He has also appeared in the likes of Doctors, Bread, The Bill and Brotherhood.