And now, we bring to you another glorious Chris Evans sighting — except this time, he’s wearing THE sweater!

Fans were absolutely beside themselves when footage of the Knives Out star wearing the iconic ivory cable knit he wore in the 2019 whodunit began circulating on social media over the weekend. As if that sight didn’t sound hot enough, did we mention he was also cuddling a puppy at the time, too? Swoon.

It all went down when the Captain America portrayer and his dog Dodger joined Olympic gymnast Aly Raisman and her dog Mylo for a cute playdate for their rescue dogs on Sunday. Evans shared several clips from the get together on his Instagram Story where the dogs could be seen getting acquainted while their humans lovingly watched from afar. In one video, Chris cradles Mylo while Aly can be heard sweetly calling for him in the background!

The Avengers: Endgame star captioned the cute post with:

“Too bad his charm didn’t work on me” 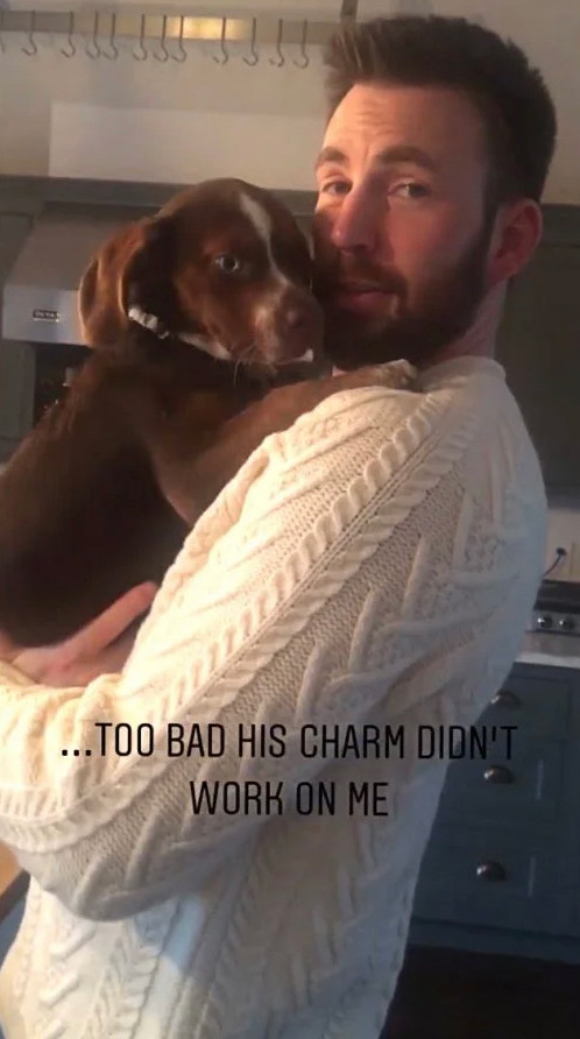 As we alluded to up top, the sweater was unmistakable and almost immediately went viral again just like it did when the movie premiered last Fall. Some of the newer but equally thirsty comments on his playdate outfit were found over on Twitter after Aly reposted the same clip:

“YOU SAID IM GONNA GIVE TWITTER EVERYTHING THEY WANT”

“Chris bless you for this picture”

For reference, the hype over Ransom Drysdale’s winter wear was so big, he even gifted his dog a miniature version of it for Christmas last year!

The only other thing that received as much commentary as the outfit was the very fact Chris and Aly were hanging out together in the first place!

We mean, who even knew they were friends let alone this close to be hanging out amid the pandemic?

As you’ll likely recall, Evans has been perpetually single since his relationship with Jenny Slate ended. He was very briefly linked to actress Lily James in recent months; chatter about the rumored couple really picked up back in July when the two were spotted on a cozy date in the park. However, whatever connection they had clearly fizzled out as the Cinderella star found herself in the crosshairs of some icky marital drama involving her married co-star Dominic West and his wife Catherine FitzGerald. That whole thing is A LOT.

But back to Chris and Aly…

Could our Cap be moving on with another cute and friendly face? Folks in their replies — including us, TBH — certainly seem to think so! This date could’ve been a one-off, but we’ll just have to wait and see what eventually becomes of it.

Before you go, check out more fun footage from Chris and Aly’s casual date (below):

Is something going on? Or is this just a case of puppy love??

And share your thoughts on any potential for romance here with us in the comments!