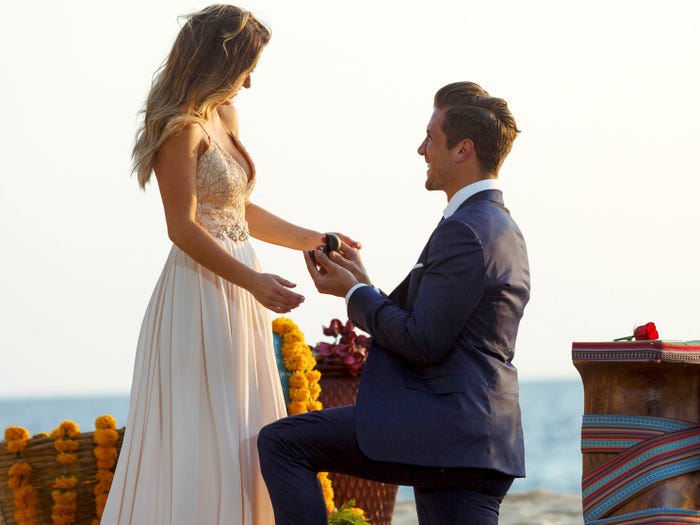 During its 18 years on ABC, the "Bachelor" franchise has seen 30 total proposals — and that's not even counting those from its spin-off "Bachelor in Paradise."

The series is no stranger to glittering Neil Lane engagement rings, but host Chris Harrison still hasn't witnessed his dream proposal on "The Bachelorette" during the show's 15 seasons.

"My goal someday is to have a Bachelorette say, 'No, no, no, I'm getting down on one knee. I'm going to propose to this guy because I want to marry him,"' Harrison told Insider.

A woman has only proposed once in "Bachelor" franchise history, when Demi Burnett popped the question to her then-girlfriend Kristian Haggerty on "Bachelor in Paradise" in 2019.

Outside of Bachelor Nation, women proposing in heterosexual couples is still very rare. Lauren Kay, the executive editor of The Knot, told The Atlantic that 97% of grooms still report proposing to their brides.

While we've yet to see a 'Bachelorette' star ask, 'Will you marry me?' Harrison said he understands that it's hard to buck tradition

"I get romance and I'm a big fan of that and I love tradition as well," he added. "I know there's this dream of being proposed to. So, you know, that's up to each individual woman and what they want."

"But I'd love that one day, if a girl pulled out one of my rings and said, 'You know what? I'm going to propose."'

Harrison is referring to his newly-released line of wedding rings with Manly Bands.

Harrison said he believes it's time for 'guys to get their do' in terms of wedding bands they can be proud to wear.

"There's a lot of little Easter eggs and tipping the cap to 'The Bachelor' and 'Bachelorette,'" Harrison said of his ring line. "For 20 years, I have kind of been the ultimate matchmaker. And I've watched people fall in love. I've watched people get married. I've watched families form and I realize how precious it is."

Harrison said that's why he knows how important a ring is to the start of any matrimonial relationship. He added, "And that decision on the perfect ring and how you … show your love is really important."

While Harrison is currently divorced (and happily dating "Entertainment Tonight" host Lauren Zima), he recalled just how little variety there was on the wedding band market when he got married back in 1993.

"Guys really love it too," Harrison added of wedding bands. "Guys are really into the romance and the ring and the wedding just as much. We want it to fit us just as much as the ladies do, so it's time for the guys to get their do."

"You basically had three options up until now and that was a gold ring, a silver ring, or you had to spend a ton of money and build a custom ring," he continued. "Heaven forbid you wanted something different!"

Harrison wanted to fix that problem with his rings, opting to choose from a slew of different materials for his designs. While some rings have "wine barrel inlays," he noted, others have "wood on the inlay."

There are all different kinds of materials that make up these rings, and they kind of speak to all my different walks of life." He said, "No matter who you are or what you do for a living, you're going to find a ring that speaks to you."

"And by the way, it's not just for guys!" Harrison added. "I think Bachelor Nation and the love comes in all shapes and sizes, and looks anyway it wants. I feel like there is something for everybody."

The host believes that one day people will own multiple wedding bands that they can wear, depending on their mood or the occasion.

"It'd be like a woman saying you're going to wear this dress and carry this purse for the rest of your life — you don't!" Harrison explained. "You change [depending] on [your] mood. You change on weather. You change on a variety of things. Why don't we do that with our rings?"

"I definitely see a time, and maybe that time is now, of men having several wedding rings for dressing up, for being casual, for however you feel," he added. "I think that might be the way of the future and why not? Let's embrace it! The guys are going to lead the way!"