Dan Walker, 43, has shared his relief over not having to wake up for his usual early start on BBC Breakfast today. The presenter was enjoying watching the US PGA Championship last night, which continued into the early hours of the morning.

In view of his 668,000 Twitter followers, Dan posted his thoughts about the golf championship and admitted he was “glad” he didn’t have to set his alarm for work.

He cheekily wrote: “Could be a late one. Glad I’m not on #BBCBreakfast in the morning. #USPGA.”

The television personality then revealed his predictions about who would lift the Wanamaker Trophy.

He was quizzed by a fan: “Packed leaderboard huh! Who ya got lifting the Wanamaker?”(sic) 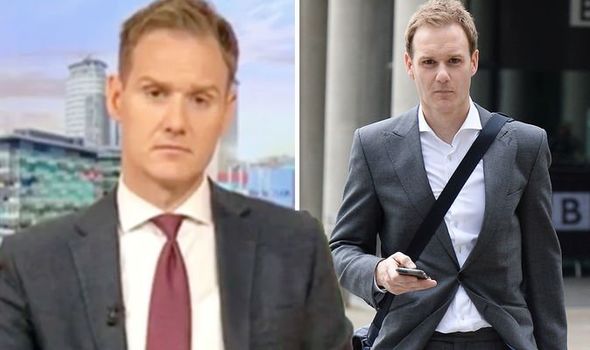 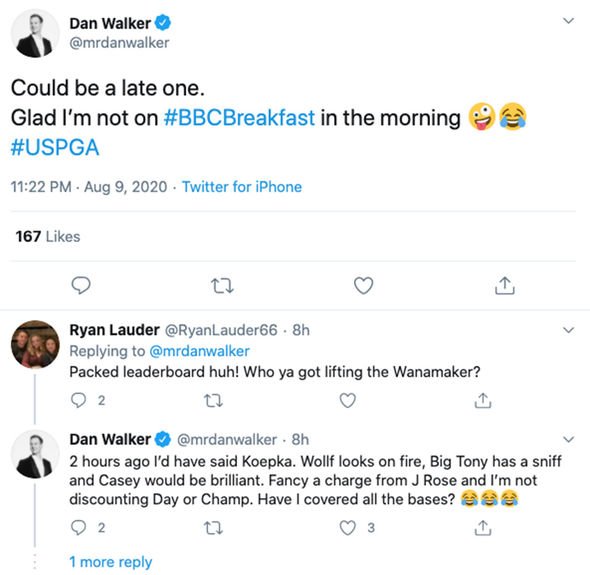 Dan then replied: “2 hours ago I’d have said Koepka. Wollf looks on fire, Big Tony has a sniff and Casey would be brilliant.

“Fancy a charge from J Rose and I’m not discounting Day or Champ. Have I covered all the bases?”

He later wrote: “Brilliant birdie at 16 from Casey but ludicrously good tee shot from Morikawa with the pressure on.

“If he holes that it could be over #USPGA.” 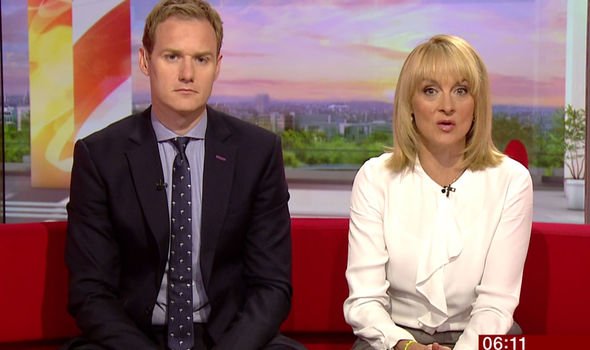 Collin Morikawa went on to become the youngest golfer to win the tournament after beating competitors including Paul Casey and Dustin Johnson.

Fans took to the comments section of Dan’s post to share their thoughts on his late night.

One person wrote: “Nothing like an -8hr time difference to ruin your Monday!!”

Another added: “Because sleep is an option right now?”

A third fan commented: “Hard to see there not being a playoff.”

In Dan’s absence from BBC Breakfast, his co-host Louise Minchin was joined on the red sofa by Jon Kay.

Elsewhere, the star hit back after being accused of gloating about his trip to Wembley Stadium to cover the FA Cup final for Football Focus.

The presenter simply wrote, “Off to Wembley” in a post ahead of the big match.

One unimpressed Twitter follower queried Dan’s tweet, writing: “More license money wasted on paying his travel expenses to go to a ground & game fans can’t go to and him interview a few ex players on FF!

“Posting this is rubbing people’s faces in it & frankly I couldn’t care if you were going to Timbuktu and use your own money!”

Hitting back, the presenter replied: “It’s my job to cover the game and present Football Focus before hand.

“Very privileged to do it. That tweet wasn’t meant as a gloat at all.

“Game will be very weird without fans. That’s what cup finals are all about.”