Products featured are independently selected by our editorial team and we may earn a commission from purchases made from our links; the retailer may also receive certain auditable data for accounting purposes.

Outdoor retailer Eddie Bauer has teamed up with Sub Pop Records on a limited-edition collaboration that celebrates their shared Seattle roots, while paying homage to another Seattle icon: the flannel shirt.

The Eddie Bauer x Sub Pop Collection launched this month in select Eddie Bauer stores and online at EddieBauer.com, and features a classic cotton flannel shirt with subtle Eddie Bauer and Sub Pop labeling. The new shirt comes in four colors, including the popular red checkered pattern made popular by members of Seattle’s grunge scene in the mid-Eighties and early Nineties. 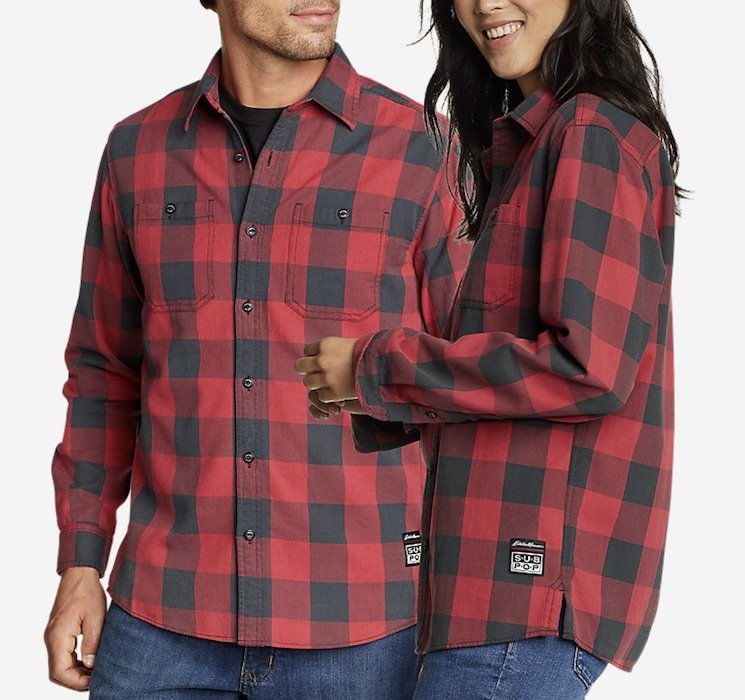 The shirt is designed for unisex wear, with a regular fit and available in sizes S to XXL. Eddie Bauer says the flannel shirts were released in limited edition, making these a true collector’s piece for fashion lovers and music fans alike.

The accompanying campaign features Sub Pop artists like Ishmael Reginald Butler (one half of the hip-hop duo Shabazz Palaces) and the punk rock quartet, Tacocat, who show off the various ways to style the shirt.

Founded in 1988, Sub Pop Records rose to prominence thanks to early releases by Nirvana, Mudhoney, Soundegarden and TAD. The label is often associated with Seattle’s original “grunge” music scene, which not only defined a decade of music, but also heavily influenced the fashion scene, with flannel shirts, boots and denim serving as a laid back contrast to the more aggressive streetwear stylings coming from hip-hop and pop.

Eddie Bauer, meantime, celebrates its 80th anniversary this year, having first launched with jackets and warm-weather gear for the Pacific Northwest in 1920. The company says the Sub Pop flannel shirt is a reworked version of a shirt that Eddie Bauer has carried in its stores for decades.

The Eddie Bauer x Sub Pop flannel shirt retails for $85 and is available in limited quantities. Snag one for yourself at EddieBauer.com before they’re all sold out.