Virat Kohli has given his imprimatur for India to aggressively challenge Australia in their Test series opener on Thursday at a time when the bruised host nation has declared it wants to regain the respect of the public and cricketing world.

Player behaviour will be as much of a focus as what happens with bat and ball when the two nations and fierce rivals begin their four-Test campaign in Adelaide on what shapes as a green but dry wicket likely to encourage the fast bowlers.

Skipper Tim Paine has the job of meshing and sparking confidence in an Australian XI humbled by Pakistan last month and still attempting to show what it stands for in wake of the ball-tampering scandal in South Africa that led to the suspensions of Steve Smith, David Warner and Cameron Bancroft and cast a searing eye on the team's poor overall behaviour.

Having confirmed that vice-captain Mitch Marsh had been dropped because of modest form, leaving his career in the balance, Paine said the home side wanted to win and also prove it had learnt the lessons of a tumultuous year. 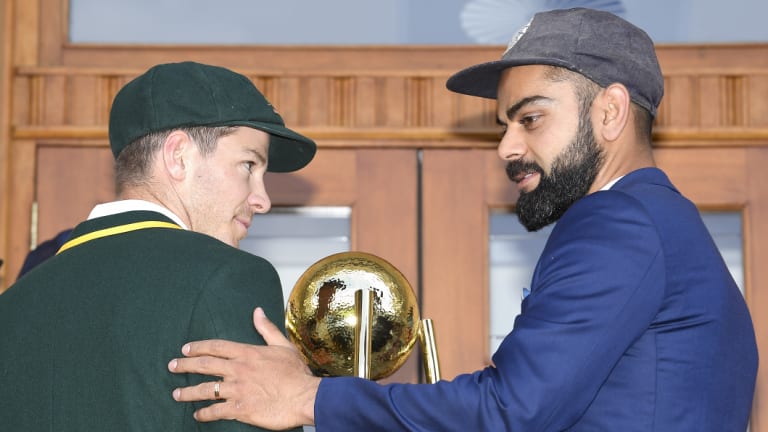 Tim Paine and Virat Kohli in Adelaide on Wednesday.Credit:AAP

"Both – that’s what we are here for. We play Test cricket to win, there is no doubt about that. Clearly, we have realised we needed to do some work in some areas of gaining the respect of our country – it's as high a priority as is winning," he said.

The Australians have maintained they want to play hard but fair but it remains to be seen how far – and obvious – they are willing to push things when it comes to sledging.

They have introduced a players pact to help guide their actions but Kohli said he still expected the host nation to embrace an aggressive streak, albeit one without any "radical" actions.

Veteran match referee Ranjan Madugalle, having had a customary pre-match chat with the captains, will have the job, along with umpires Nigel Llong and Kumar Dharmasena, of ensuring the mythical "line" is not crossed.

"I personally don't think that any team should be totally negative after something like that happens. I don't see stuff happening that has happened in the past where both teams have crossed the line but still it's a competitive sport at the end of the day, it's international cricket. We do not expect guys to just come in and bowl and just walk back," Kohli said.

"There are going to be times when you have to put batsmen under pressure, not necessarily crossing the line but just getting into their heads, which you expect from any side in the world, not just Australia. It is going to be there but it is not going to be at the level of the past where both teams have lost control.

"The competitiveness will be there because you eventually want to get guys out if the situation is not going your way and you understand you are up against an important guy in the opposition. You will go hard at that person, be it in your body language or just putting in a word or two, but I don't see anything radical happening because the skill set is high so we … would not need to get into anything. But there are times when situations are difficult you don't find ways to upset a batsman's rhythm. I think a bit of banter there is not harmful at all."

Kohli, the world's best batsman, has said he no longer needs confrontation to help inspire his heroics but he is unlikely to remain composed should there be a repeat of last year's drama between the nations when Smith landed in trouble for looking to the dressingroom for guidance before he called for the decision review system.

Paine, preparing for his maiden Test as skipper on home soil, has declared his team will play "hard Australian cricket" but has grown tired of the focus on this.

He was handed the captaincy in South Africa because he was seen as the best man to help influence change, while also handling the public and media scrutiny which came with the job.

"I just had an interview, a one on one, with Ricky Ponting and we went through the names of Australian Test captains over the years, so it is a little bit daunting to be in a bracket with some of those guys," Paine said.

"At the same time I’m trying to keep it as simple as I can. I’m trying to be myself and do my job which is first and foremost to wicket keep and bat. I’m hugely honoured to be captain of Australia but I am not letting it weigh me down too much."

Victorian opener Marcus Harris will make his Test debut while fellow Victorian Aaron Finch and South Australian skipper Travis Head will step out in the traditional format on home soil for the first time.