Justin Bieber is on the attack!

The 25-year-old performer’s been dealing with a lot of mental health issues as of late, and we’re sure trolls relentlessly attacking his relationship with wife Hailey Bieber, 22, isn’t making things any better.

So on Tuesday, he decided to face his relationship critics head on by reposting one of their hurtful comments and replying extensively. The follower — definitely hoping to get a rise — wrote to Justin:

“You are NOT in love with Hailey! You only married her to get back at SG plus Hailey sleeps with men like @shawnmendes for fame and she’s racist @wflig”

The “SG” referred to (above) is obviously the Purpose singer’s long time ex Selena Gomez. The racist comment is likely a call-out for some old DMs where the blonde model reportedly used the n-word which surfaced a few years ago.

In response to all of this, Bieber left no stone unturned and addressed the Selena stuff HEAD ON, claiming he still loves her, but Hailey is endgame:

“Ur immature the fact that you have an account dedicated to dissing my wife and I is absolutely absurd why would I dedicate my whole life to someone in marriage to get back and my ex, anyone who believes this is mean spirited or 10 years old or younger because a logical person doesn’t talk or think this way u should be ashamed of yourself really. I absolutely loved and love Selena she will always hold a place in my heart, but I am head over heals in love with my wife and she is absolutely the BEST THING that has ever happened to me period.”

“The fact that you want to spend your day dedicating yourself to hate says a lot about you and if this was some sick ploy to get my attention U to get are so wrong on so many levels I’ve seen multiple people say things like this and will never respond again to a message like this because I don’t like to even give it my energy but this is a reply to all the immature sick people who send Hailey hurtful messages like “ he always goes back to Selena” or “Selena is better for him” YOU HAVE NO IDEA MY LIFE AND WHAts good for me!! Hailey is my bride period if you don’t like that or support that that means you don’t support me and if you don’t support me your not a fan nor a good person, if you…”

See a photo of the full reply (below)! 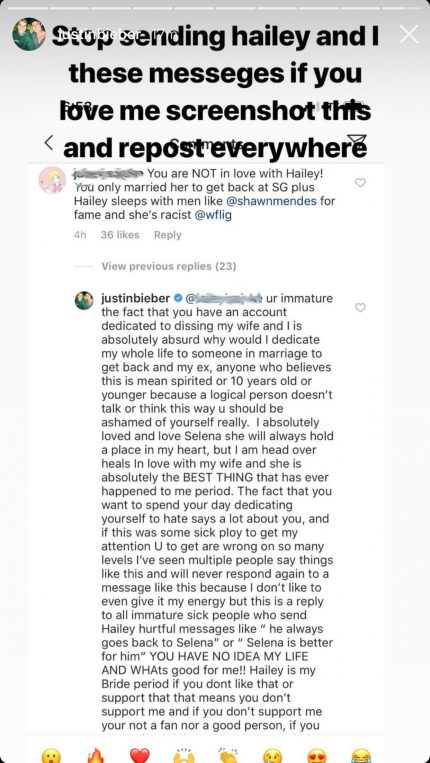 “Stop sending hailey and I these messages if you love me screenshot this and repost everywhere.”

Now, we don’t see how the conversation wrapped up because Justin didn’t include the entirety of what was said — but we can read between the lines. He held nothing back!!

This all comes after a “frustrated” Hailey confessed to Cosmo that the pop star’s fans are “possessive” and it forces her not to read the comments.

It’s been no secret Justin is dealing with a lot these days, as he’s been very open with fans about his current journey. This week JB even shared he’s been sleeping in a hyperbaric oxygen chamber to likely help boost Serotonin levels. 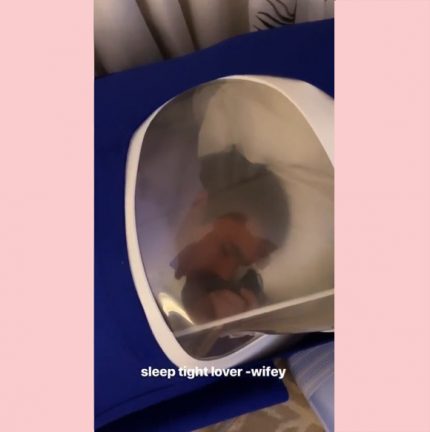 We really do hope he’s ok, and this latest session of lashing out will be his last. Maybe a social media break is in order — clear timeline, clear mind?

What do you make of this, Perezcious readers? SOUND OFF with your thoughts on Jelena, Jailey, and endgame in the comments (below)!