Actor and game-show panelist Orson Bean, 91, dies after he was hit by multiple cars while crossing a street in Los Angeles

Veteran actor Orson Bean has died after being struck by a car in Venice, Los Angeles on Friday night.

The Los Angeles County coroner’s office confirmed Bean’s Friday night death, saying it was being investigated as a ‘traffic-related’ fatality.

Los Angeles Police Department Capt. Brian Wendling initially told local stations that a man was walking in the Venice neighborhood when he was clipped by a vehicle and fell.

A second driver then struck him in what police say was the fatal collision.

Both drivers remained on the scene. 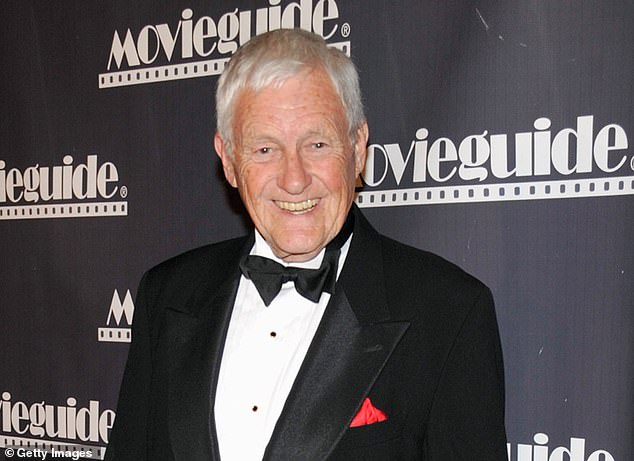 Veteran actor Orson Bean has died after being struck by a car in Venice, Los Angeles on Friday night. Seen here in 2009 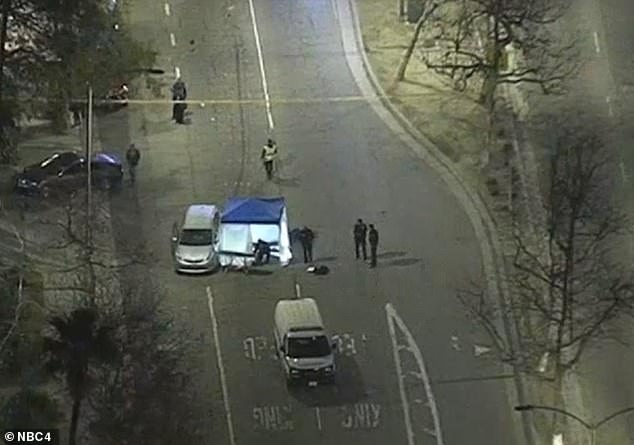 Bean was walking in the Venice neighborhood when he was clipped by a vehicle and fell. The scene of the accident is pictured

The veteran actor is survived by his wife of 27 years Alley Mills and four children.

Capt. Wendling told ABC News, ‘The car coming westbound did not see him and clipped him and he went down.’

‘A second vehicle was coming up, was distracted by people trying to slow him down and then looked up and then a second traffic collision occurred and that one was fatal.’

Bean enlivened such TV game shows as ‘To Tell the Truth’ and played a crotchety merchant on ‘Dr. Quinn, Medicine Woman.’

He appeared in a number of films – notably, ‘Anatomy of a Murder’ and ‘Being John Malkovich’ – and starred in several top Broadway productions, receiving a Tony nod for the 1962 Comden-Green musical ‘Subways Are for Sleeping.’ But fans remembered him most for his many TV appearances from the 1950s onward.

‘Mr. Bean’s face comes wrapped with a sly grin, somewhat like the expression of a child when sneaking his hand into the cookie jar,’ The New York Times noted in a review of his 1954 variety show, ‘The Blue Angel.’ It said he showed ‘a quality of being likable even when his jokes fall flat.’ 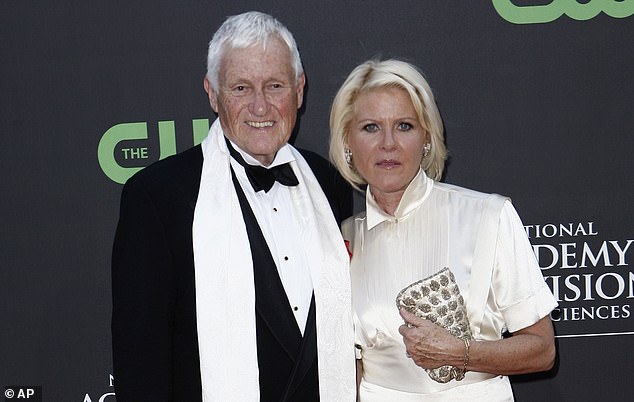 The veteran actor is survived by his wife of 27 years Alley Mills (pictured) and four children. 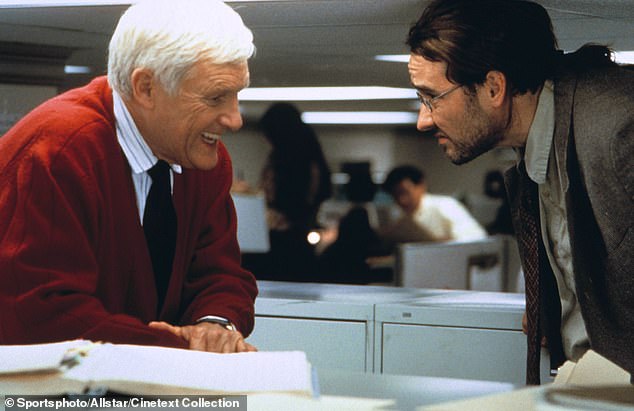 The 91-year-old Being John Malkovich actor was ‘allegedly jaywalking’ in the beachside community ‘when he was clipped by one vehicle and then struck by another’ reported TMZ. Seen here in the 1999 film with co-star John Cusack

Born in Burlington, Vermont, in 1928 as Dallas Frederick Burrows, he never lost the Yankee accent that proved a perfect complement to the dry, laconic storytelling that established him as popular humorist. He had picked the stage name Orson Bean ‘because it sounded funny.’

His father, George, was a founding member of the American Civil Liberties Union and Bean recalled later that his ‘house was filled with causes.’ But he left home at 16 after his mother died by suicide.

In a 1983 New York Times interview, he recalled his early career in small clubs where the show consisted of ‘me – master of ceremonies, comedian and magician – maybe a dog act, and a stripper.’ It was a piano player in one such club, he said, who suggested replacing Dallas Burrows with some funny name like ‘Roger Duck’ – or Orson Bean.

Bean’s quick wit and warm personality made him a favorite panelist for six years on ‘To Tell the Truth.’ The game required the panelists to quiz three contestants to figure out which one was a real notable and which two were impostors. The dramatic outcome inspired a national catchphrase as the host turned to the three and said: ‘Will the real (notable’s name) please stand up?’

Bean’s style appealed to both Jack Paar and Johnny Carson, and he appeared on ‘The Tonight Show’ more than 200 times.

But his early career was hobbled for a time when he found himself on the Hollywood blacklist in the early years of the Cold War.

‘Basically I was blacklisted because I had a cute communist girlfriend,’ he explained in a 2001 interview. ‘I stopped working on TV for a year.’ 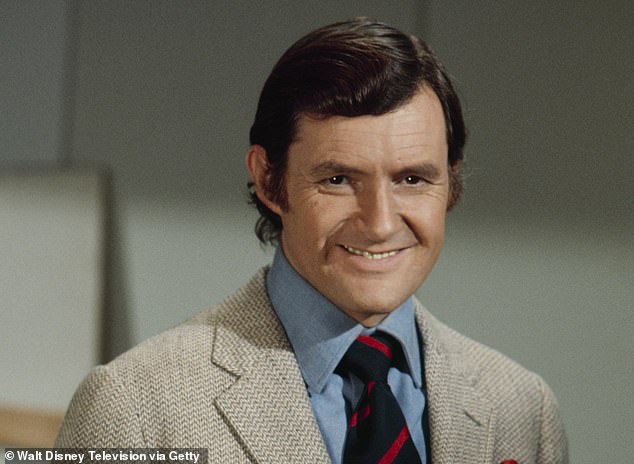 Bean began his career in TV in the 1950s, acting in shows like Goodyear Playhouse and Broadway Television Theater. Seen here in 1970

The blacklist didn’t stop him in the theater. Bean starred on Broadway as a timid fan magazine writer in George Axelrod’s 1955 Hollywood spoof ‘Will Success Spoil Rock Hunter?’ alongside Jayne Mansfield and Walter Matthau. He also starred on Broadway with Maureen O’Sullivan in ‘Never Too Late’ and with Melina Mercouri in ‘Illya Darling,’ based on her hit film ‘Never on Sunday.’

Bean took a break from his career for a time in the 1970s when he dropped out and moved to Australia, where he lived a hippie lifestyle. But he returned to the U.S. and – after a period as a self-described ‘house-husband’ – resumed his career.

‘I got sick of contemplating my navel and staring up at the sky and telling myself how wonderful it was not to be doing anything,’ he explained in a 1983 interview with The New York Times.

In the 1990s, he played the shopkeeper Loren Bray on the long-running drama ‘Dr. Quinn, Medicine Woman.’ He remained active on the screen in recent years with guest shots in such shows as ‘Desperate Housewives,’ ‘How I Met Your Mother’ and ‘Modern Family.’

Meanwhile, his politics turned more conservative . He became related to a leading right-wing commentator, Andrew Breitbart , when his daughter, Susannah, married him. Breitbart died in 2012 and Steve Bannon, later a top adviser to Donald Trump, took over Breitbart´s eponymous website, for which Bean had penned occasional columns.

Bean wrote a memoir called ‘Too Much Is Not Enough’ and a book about a non-traditiona l therapy called ‘Me and the Orgone.’

He had already shown his interest in non-traditional thinking in 1964 when he bought a building in Manhattan and opened up a school based on the philosophy of Summerhill, the progressive British school founded by A.S. Neill.

‘I said to myself, we have to start with the children. Why not start a school?’ he told The New York Times.

That same year, he co-founded the Sons of the Desert, an organization dedicated to comedians Stan Laurel and Oliver Hardy, with chapters around the world.

More recently, income from ‘Dr. Quinn’ and other voice and acting work allowed Bean to finance the Pacific Resident Theater Ensemble in Venice, where he appeared with his third wife, actress Alley Mills.

He had a daughter, Michele, from his first marriage to Jacqueline de Sibour, and sons Max and Ezekiel and daughter Susannah from his marriage to Carolyn Maxwell.