Last week, Good Morning Britain presenter Piers Morgan, 54, was at the centre of a petition, which saw thousands calling for him to be axed after his views on non-binary gender.

Today, the outspoken journalist and his co-star Susanna Reid, 48, spoke out about the petition on the show.

He later took to Twitter to urge people to vote on whether he should stay or go.

BBC desperate for me to be fired – do the maths, folks!

The post read: “There are calls for @piersmorgan to be fired over his views on gender. Should he stay or should he go?”

Daniel captioned the post: “Your chance to decide if Piers Morgan should be fired. It’s in your hands everybody (maybe).”

Piers responded to Daniel’s post in view of his 6.83 million followers, writing: “BBC desperate for me to be fired – do the maths, folks!”

The BBC star replied: “(Piers Morgan’s GMB is still miles behind BBC Breakfast in the ratings).”

Refusing to hold back, the Good Morning Britain host responded: “Gap closing fast and we get ten times the noise/attention/scoops.

“No wonder you lot are panicking and want me gone.” 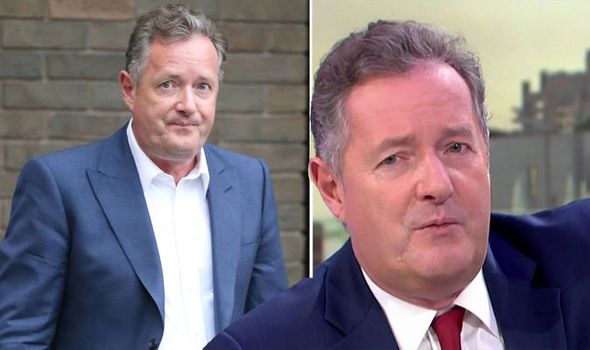 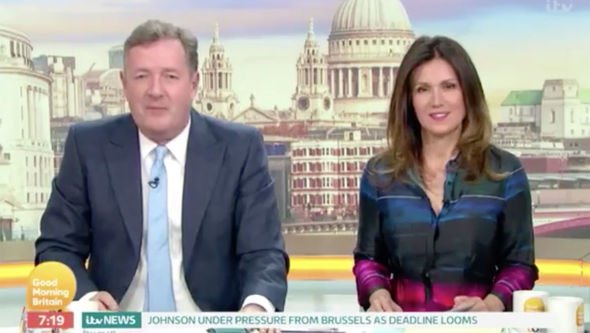 Another user insisted BBC Breakfast would be in contact with Piers if he ever left ITV.

The Twitter user wrote: “If @GMB got rid of you Piers @BBCBreakfast would have you on their sofa within a week.”

But insisting the move wouldn’t happen, he replied: “A) They can’t afford me. B) I’d be too interesting.”

The petition first came to light after Piers said he was identifying as a “two-spirit penguin” in a debate about non-binary gender.

A musician named Kennedy called for the host to be sacked due to his “dangerous dehumanisation of transgender and non-binary individuals”.

Piers later shared a news article which highlighted the reasons behind the petition. 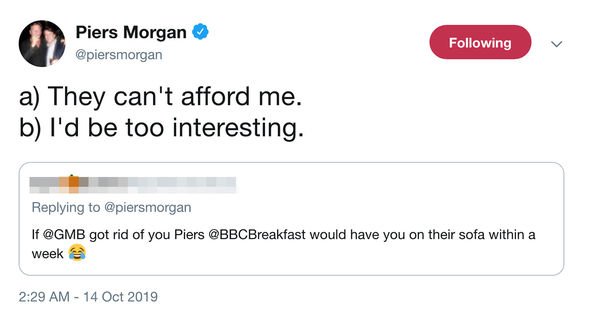 “I support those who transition, just as I’ve always loudly supported gay rights, but I don’t support the ridiculous notion of 100 genders, and most sensible people agree with me.”

Elsewhere today, Piers shared a picture of himself and Susanna on the front page of Woman’s Own magazine.

The headline read: “More money or I’m off! Will Susanna have a new have a new co-host?”

Piers shared the picture in view of his 749,000 followers with the caption: “Crikey.”