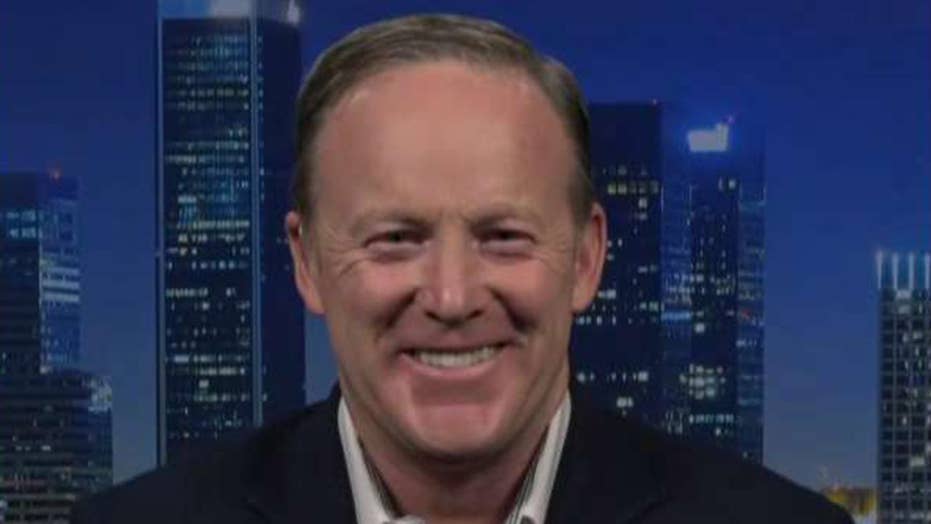 America First Action senior adviser Sean Spicer on ‘Dancing with the Stars’ and Don Jr. going up against the hosts of ‘The View.’

Former White House Press Secretary Sean Spicer said Thursday night that he is truly "humbled" by the support he has received, as he tangos his way into the quarter-finals of ABC's "Dancing With the Stars."

Appearing on "Fox News @ Night" with host Shannon Bream, Spicer said he "can't believe" he has lasted this long on the show.

"I'm truly humbled that people are saying 'we want you to continue on' when I'm clearly not the best guy. I am trying to make as much progress as possible every week, but I get it," he said, lamenting the backlash from some over his staying power despite dismal reviews from the show's judges.

"If you're upset with that, they should watch another show or the judges should change the format. But, the reality is is that it's been this way for 28 seasons," he said, adding that the best dancer is not always the winner.

He acknowledged his dancing shortfalls but explained that he has taken the process seriously and the judges have credited him for "making progress" each week.

Spicer was also asked about Donald Trump Jr.'s explosive appearance on "The View," praising the way the president's son handled the situation.

"Don Trump went in there to the liberal lion's den and owned them," he told Bream, incredulously.

"He kind of took it right to them and owned them in a way that no one has on that show before," Spicer said.

"The thing that's so interesting is, that's the nexus of his book. He talks about how these guys have such a double standard."