Eat your heart out, Imelda Marcos.

Glamorous socialite Amanda Eliasch, who received a chunk of her former husband Johan Eliasch’s £400 million fortune following her 2007 divorce settlement, is clearing out her designer wardrobe and holding a gigantic couture boot sale.

‘There are 250 pairs of shoes in the sale,’ she tells me. ‘Manolos, the Guccis and Puccis — and around 300 black jackets. I only wear black jackets. All the items come from my three properties in Cheyne Walk, Paris and Los Angeles.’

Eliasch, 59, credits the Duchess of Sussex for inspiring her to downsize her wardrobe. 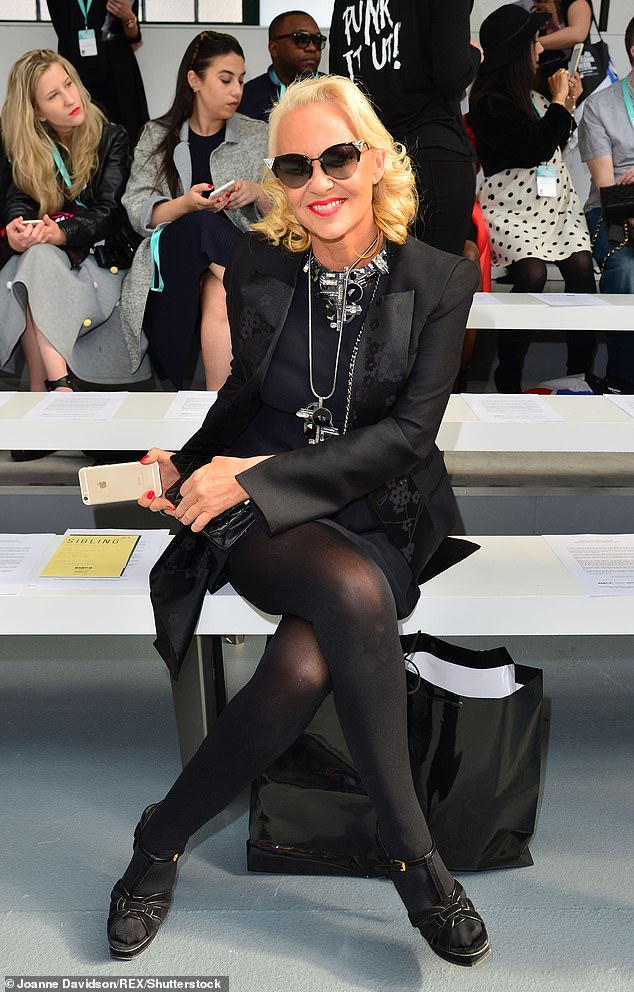 Glamorous socialite Amanda Eliasch, pictured during London fashion week in 2015, is clearing out her designer wardrobe and holding a gigantic couture boot sale 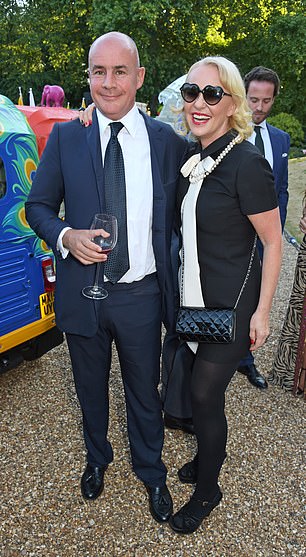 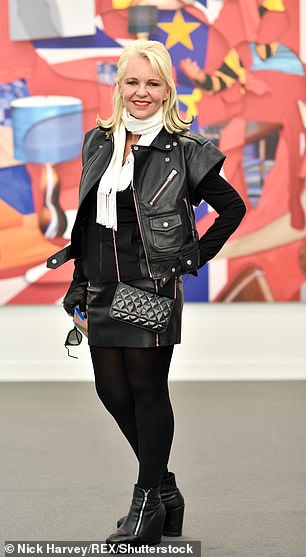 ‘Prince Harry and Meghan Markle urging us reduce our carbon footprint has made me think about waste. I used to be a hoarder, but now I don’t see the point.’

A fashion auction next week at The Swan in Tetsworth, Oxfordshire, will be followed by a sale of her furniture and art in October.

The most expensive item is a £75,000 white elephant designed by Marc Quinn which she acquired at a Mark Shand charity auction. ‘The fashion of consumerism is going out of fashion,’ she says.

‘What does it mean to wear high fashion these days? I am at a different age now and when you get older you don’t want to accumulate all this stuff. My poor sons,’ she says. ‘If I croak tomorrow, what on earth will they do with all this stuff?’

Amanda has two sons Charlie, 27, and Jack, 23, by sports firm tycoon and Tory donor Johan, whom she married in 1988. She divorced him in 2006 after her 11-year affair with a plastic surgeon.

She and her husband were once the toast of London society. They got married in the dinosaur section of the Natural History Museum and the bride left in a sedan chair carried by two former Mr Great Britain bodybuilders.

She expects the sales to raise £250,000 and will give the proceeds to her sons and the charity Inside Success.

Carson hobnobs with Lady Maud… What would the Earl say? 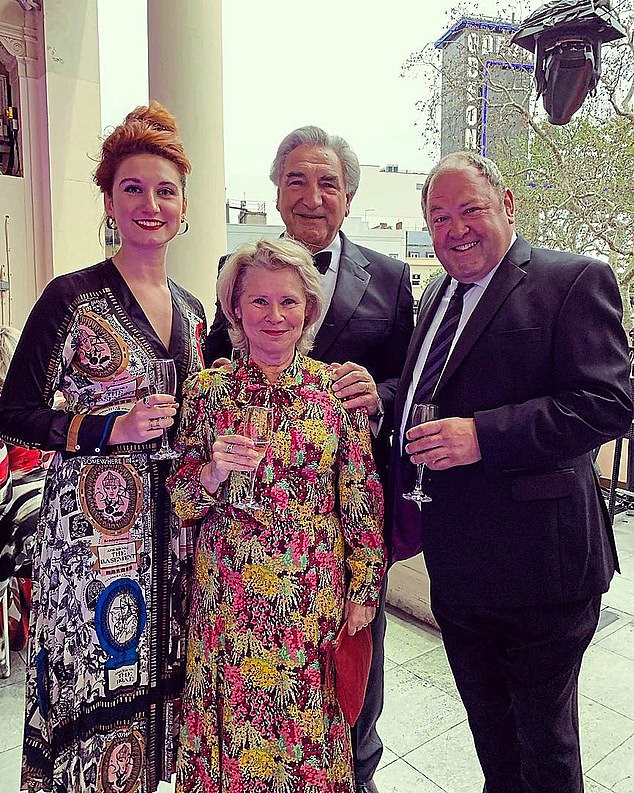 Jim Carter, who plays butler Carson, and wife Imelda Staunton, pictured with their daughter Bessie, celebrated the premiere of the Downton Abbey film this week

It was a family occasion for actor Jim Carter, wife Imelda Staunton and their daughter Bessie as they celebrated the premiere of the Downton Abbey film this week.

Carter, who plays butler Carson in the movie, had to share the limelight with his wife Imelda, who landed a plum new role in the film as Lady Maud Bagshaw, the Queen’s lady-in-waiting.

So what was it like having his wife on set? ‘I saw less of her on set than I do at home because we worked together for a few days but never had any dialogue together,’ Carter told me. 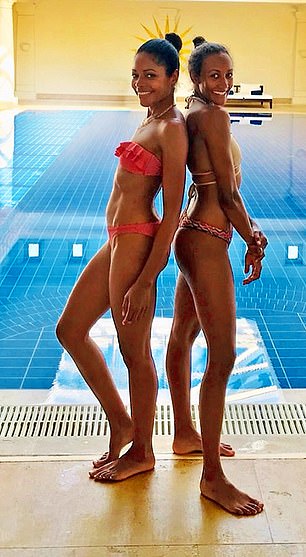 Naomie Harris, left, and her stunt double Bethany Levy, right, holidayed together at the luxury Anassa hotel resort in Cyprus

James Bond star Naomie Harris is licensed to chill on a spa break in Cyprus this week.

Guests at the luxury Anassa hotel resort would be forgiven for thinking the actress, who reprises her role as Moneypenny in the forthcoming 007 movie No Time To Die, had a twin as she holidayed with her stunt double, Bethany Levy.

‘Celebrating my birthday week and the privilege of turning 43 with her,’ says Naomie, who worked with Bethany in Rampage and her latest film, Black And Blue.

‘I know some people hide their age, but I shout mine from the rooftops!’

While the Duchess of Sussex must wait to be immortalised by a royal artist, Princess Anne is to be sculpted in bronze.

The Queen’s daughter has agreed to sit for artist Frances Segelman, who has already made busts of Prince Philip and Prince Charles.

‘I am doing Anne next and start sittings with her this autumn,’ Frances tells me at at a party to celebrate the 94th birthday of her philanthropist husband, Sir Jack Petchey.

He is understood to be paying for the new art work. 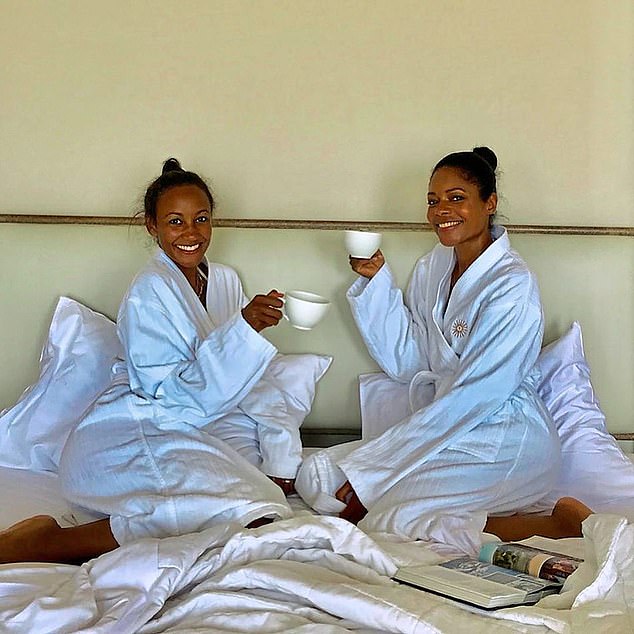 Naomie, right, and Bethany worked together in Rampage and her latest film, Black And Blue

Prince Andrew has come up with a cunning plan to deal with negative remarks about his ten-year association with the late sex offender Jeffrey Epstein — simply silence his critics.

He has switched off comments on his official Instagram account so that his 215,000 followers are unable to respond to his photographs.

The Queen’s second son had always welcomed feedback from his followers, but the comments had become increasingly hostile as disquiet grew about his links with Epstein, who was jailed for procuring an underage girl for prostitution.

Andrew stayed with Epstein in New York even after his release from prison.

At least one of the Johnson clan has cause to celebrate 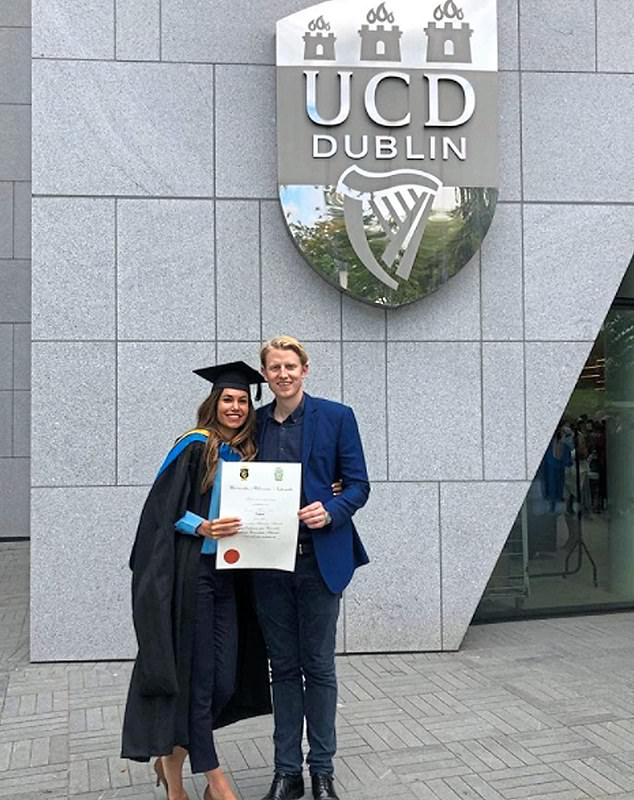 The Prime Minister’s half-brother, Max, is celebrating his Brazilian wife Gabriela, 30, as she graduates from University College Dublin with a master’s degree in digital marketing

It’s not all sibling doom and gloom for Boris Johnson, whose younger brother, Jo, resigned from his Government last week.

The Prime Minister’s half-brother, Max, is celebrating his Brazilian wife’s success as she graduates from University College Dublin with a master’s degree in digital marketing.

He and Gabriela, 30, who wed two years ago in Hong Kong — where Max has lived for the past 13 years — posed for a picture on the day.

The 33-year-old son of Stanley Johnson and his second wife, Jennifer Kidd, says he was ‘honoured to have witnessed a beautiful achievement.’