The Cincinnati Reds have suspended broadcaster Thom Brennaman after uttering a homophobic slur while on the air.

The play-by-play announcer made the offensive comment right after a commercial break during a doubleheader between the Reds and the Kansas City Royals in Kansas City, Missouri.

Fox Sports say they support the Reds decision to opt for a suspension. They said in a tweet that the language “used this evening is hateful, offensive, and in no way reflects the values of FOX Sports Ohio.”

When the Fox Sports Ohio feed returned from commercial 57-year-old Brennaman didn’t realize he was on air and was overheard saying, “one of the f*g capitals of the world.”

It is unknown what led to him making the remark, and the context remains a mystery.

At the top of the fifth inning, Brennaman apologized while on air.

He said: “A comment went out that I am deeply ashamed of. If I hurt anybody out there… from the bottom of my heart, I am so very sorry.” He then added before being interrupted by a home run, “I pride myself and think of myself as a man of faith.”

After the home run had been called, he continued with his statement: “I don’t know if I’m going to be putting on this headset again.”

He continued by apologizing for the people who pay his checks, his bosses at Fox Sports, and the people he works with.

He finished up by saying: “That is not who I am and never has been, and I’d like to think maybe I could have some people that can back that up. I am very, very sorry, and I beg for your forgiveness.”

Then he was pulled off the air.

The Cincinnati Reds have said he is suspended with immediate effect and until further notice. The Reds issued a statement that said the organization was “devastated” by the language Brennaman used.

In no way does this incident represent our players, coaches, organization, or our fans. We share our sincerest apologies to the LGBTQ+ in Cincinnati, Kansas City, all across this country, and beyond.” 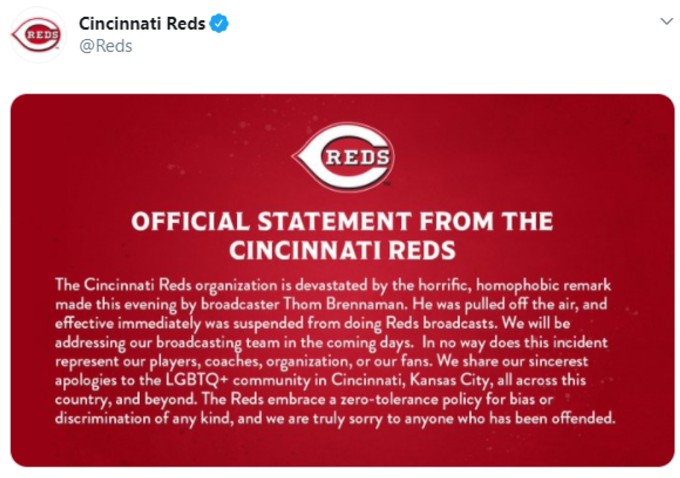 The Reds added: “We will be addressing our broadcasting team in the coming days.”

Celebrities and public figures regularly get into trouble for making offensive comments. Last month, Nick Cannon was fired from Viacom CBS after he made a series of anti-Semitic comments on a podcast.

Last year the Reds were involved in one of the biggest MLB brawls of the season when pitcher Amir Garrett decided he’d had enough of the baseball niceties and tried to fight the entire Pittsburgh Pirates roster.