Noel and Sue Radford, from Morecambe, Lancs, celebrated the birth of their 21st baby Bonnie Raye in November and are preparing for the largest Christmas yet. 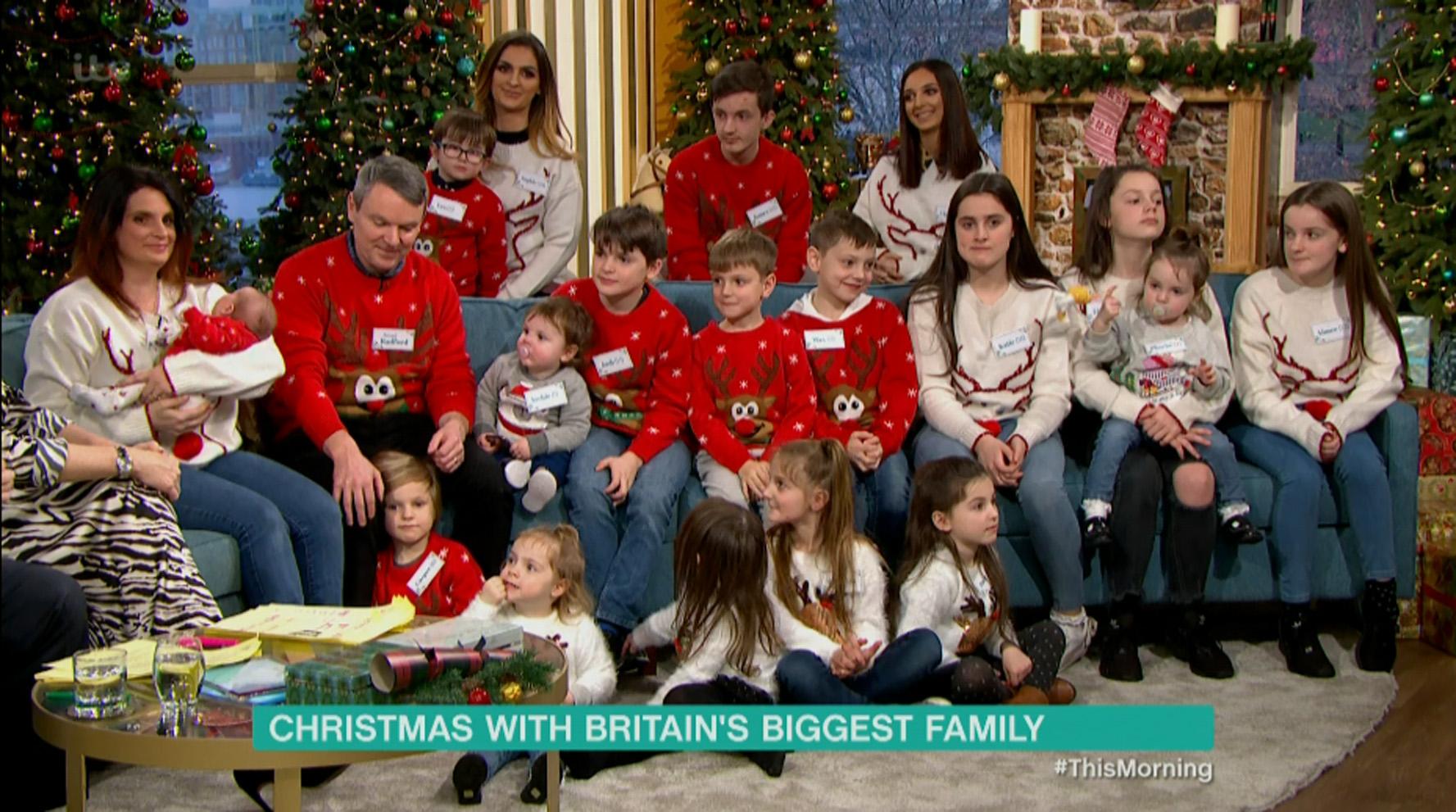 The large family appeared on This Morning wearing matching Christmas jumpers to lift the lid on their festivities and introduce their latest addition.

She said of Bonnie Raye: “She was very quick, she was not hanging around. I think they’ve got my labour down to 12 minutes.”

Preparing for a large Christmas is not an easy task for the Radfords, who have to cook Christmas lunch for around 30 people, including their grandkids. 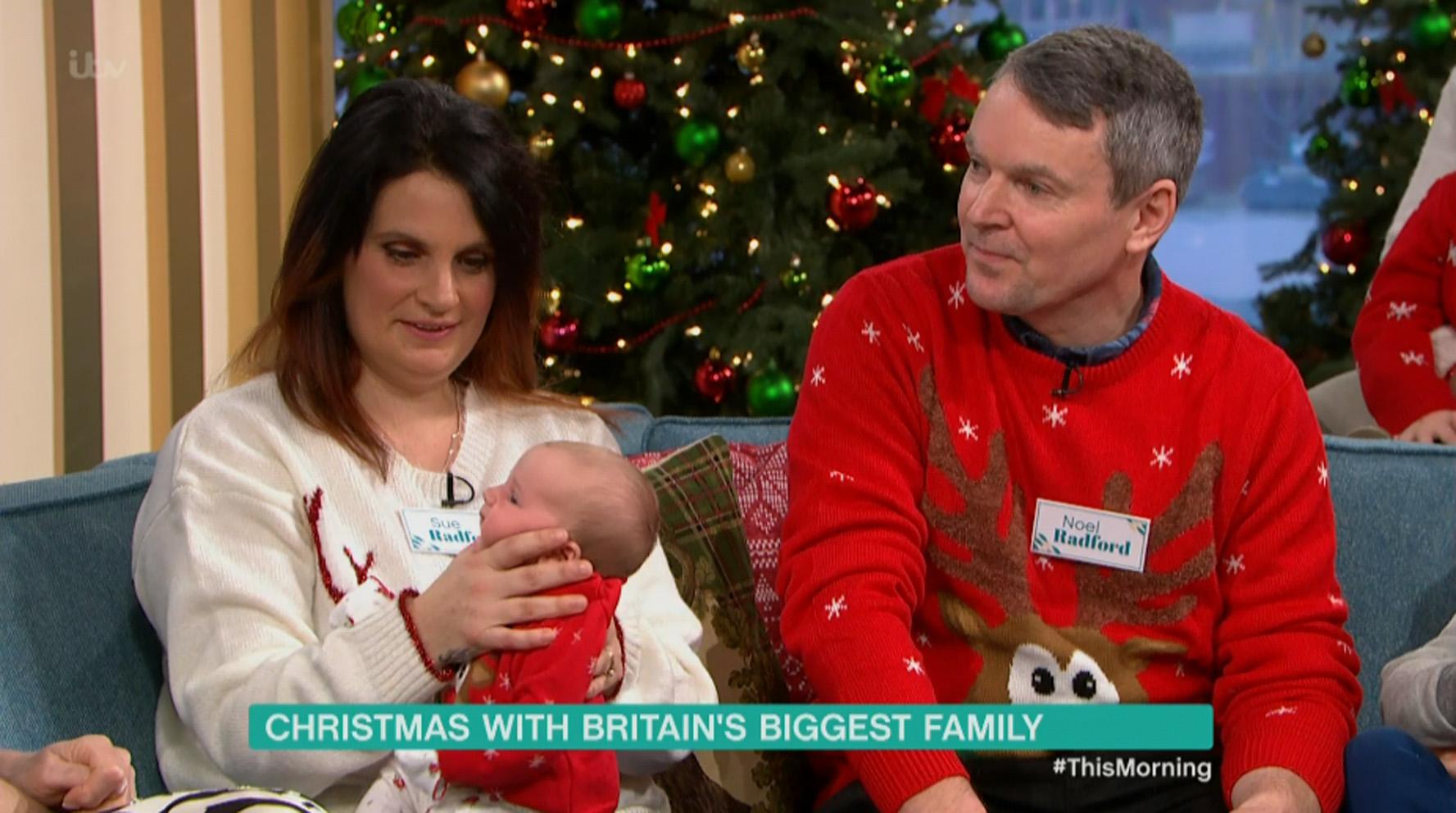 Noel, 47, told the hosts: “We prep a lot the night before on Christmas Eve.

“We’ve got a table we can fit 16 around, we’ve got an island in the kitchen for another six and some double up.”

When asked whether they have to budget for the amount of food it takes to feed the family, Noel said: “I think we do but we never cost it out because it’s probably not a good idea to actually do that.”

Ruth joked about the cost saying “Does it scare you?” to which Noel laughed “Yes”. 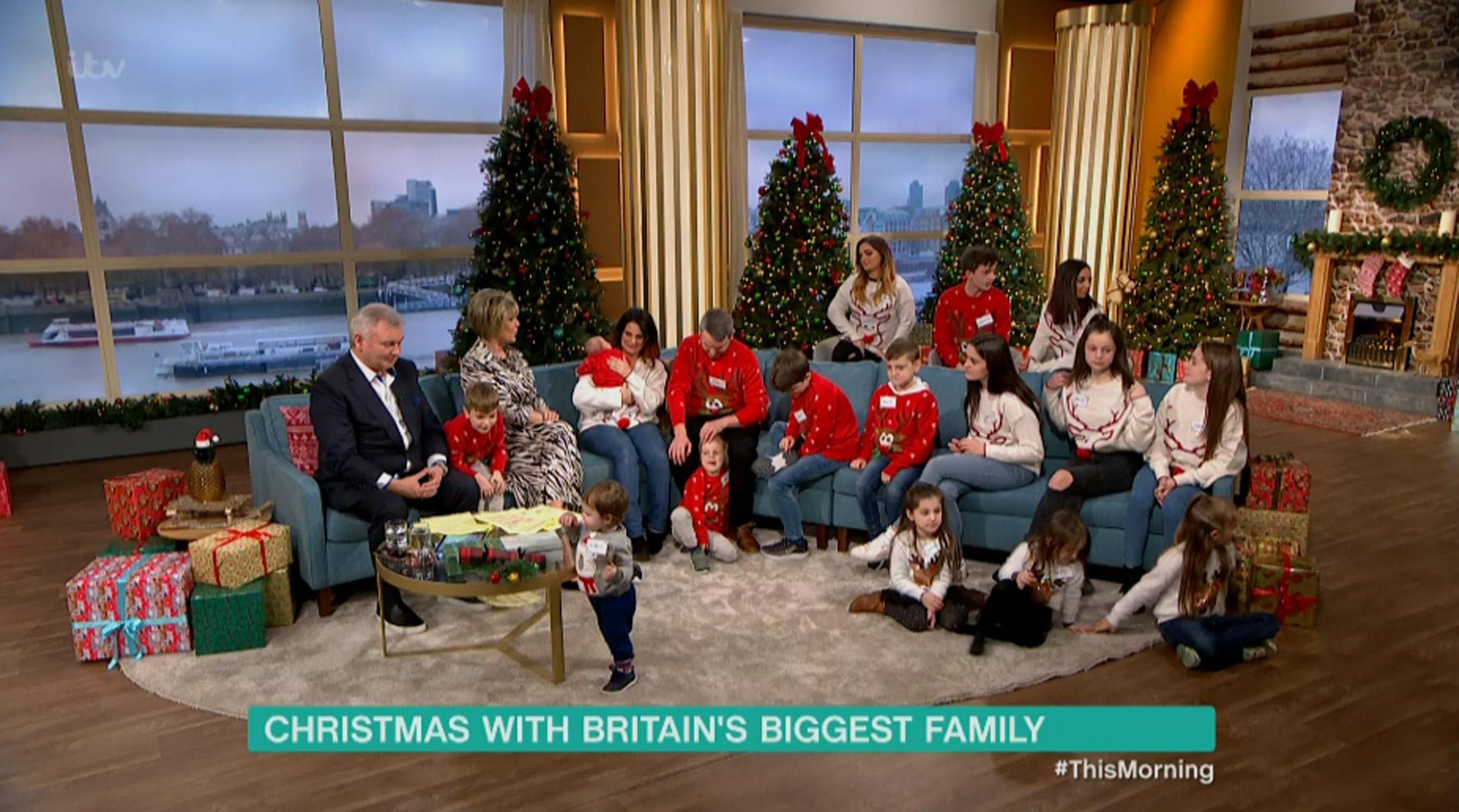 With a large family to entertain in their ten-bedroom converted care home, most of the Christmas day cooking falls to Noel.

And of course the older kids have to pitch in to help with the younger ones.

James, 14, said: “Quite a lot of the older ones will have to help around the help with Archie, Hallie and Phoebe. I’m not one of the main ones that do it, not going to lie.”

The hosts asked James if there are times when he needs a bit of space away from his family, and he replied: “No I don’t really need silence as it would be awkward and wouldn’t feel right.” 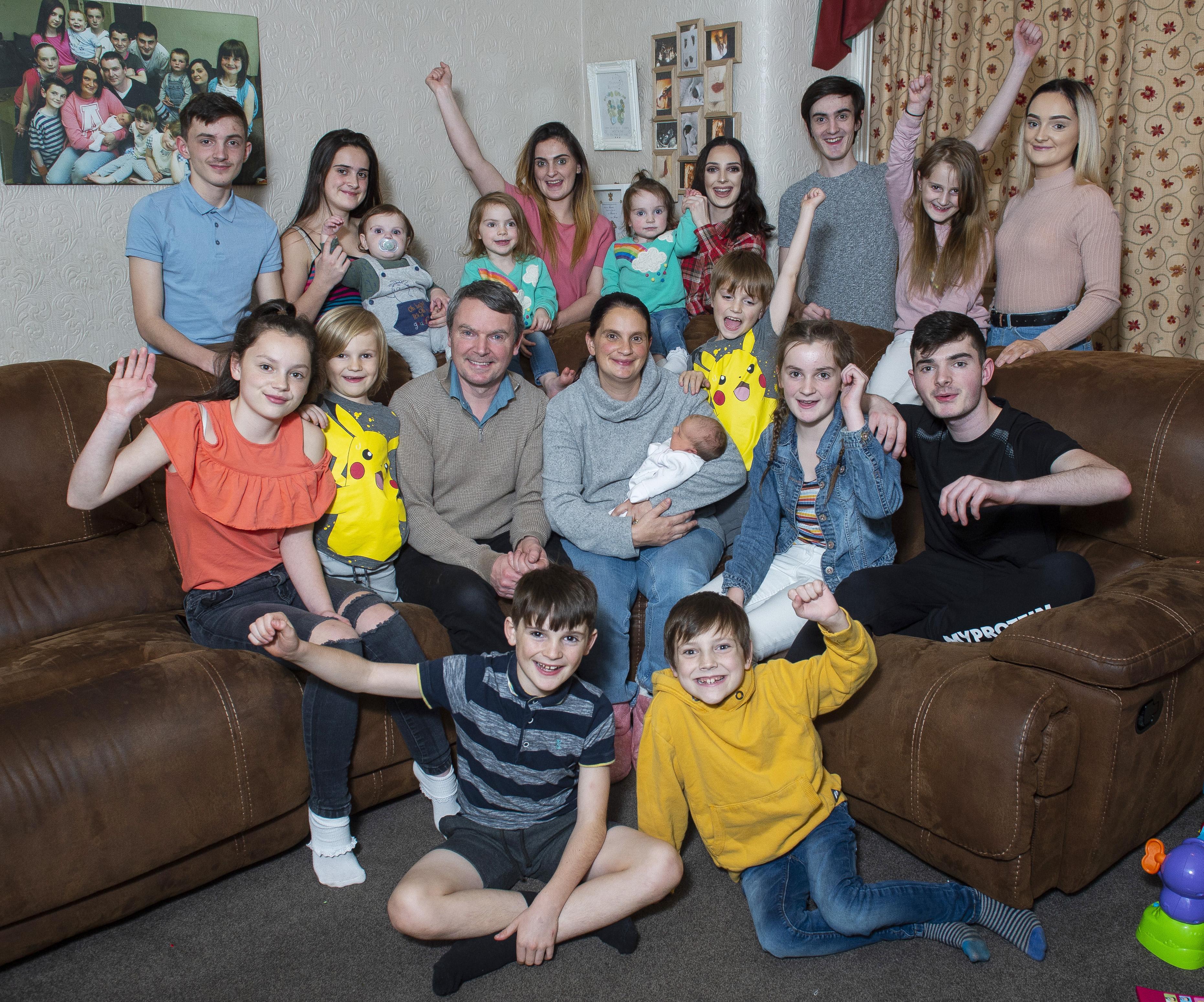 The family shot to fame on the Channel 4 documentary 15 Kids and Counting in 2012.

Newest arrival Bonnie Raye tipped the scales at 8lb 4oz when she arrived at 6.43pm on Tuesday at the Royal Lancaster Infirmary, where midwives have delivered 14 of the Radfords’ children.

The couple, who support themselves with their bakery and claim only child benefit, had their first baby when Sue was just 14.

Ruth pointed out that last time they were on the show with previous new arrival Archie they had said “definitely no more” when asked if they would have more kids.

But now they claim they are done having more kids and Bonnie Raye is their last.

Sue insisted: “I’m saying definitely no more. Honestly, four under the age of four is really hard. There will be no more, will there?”

Noel agreed and replied: “No.” 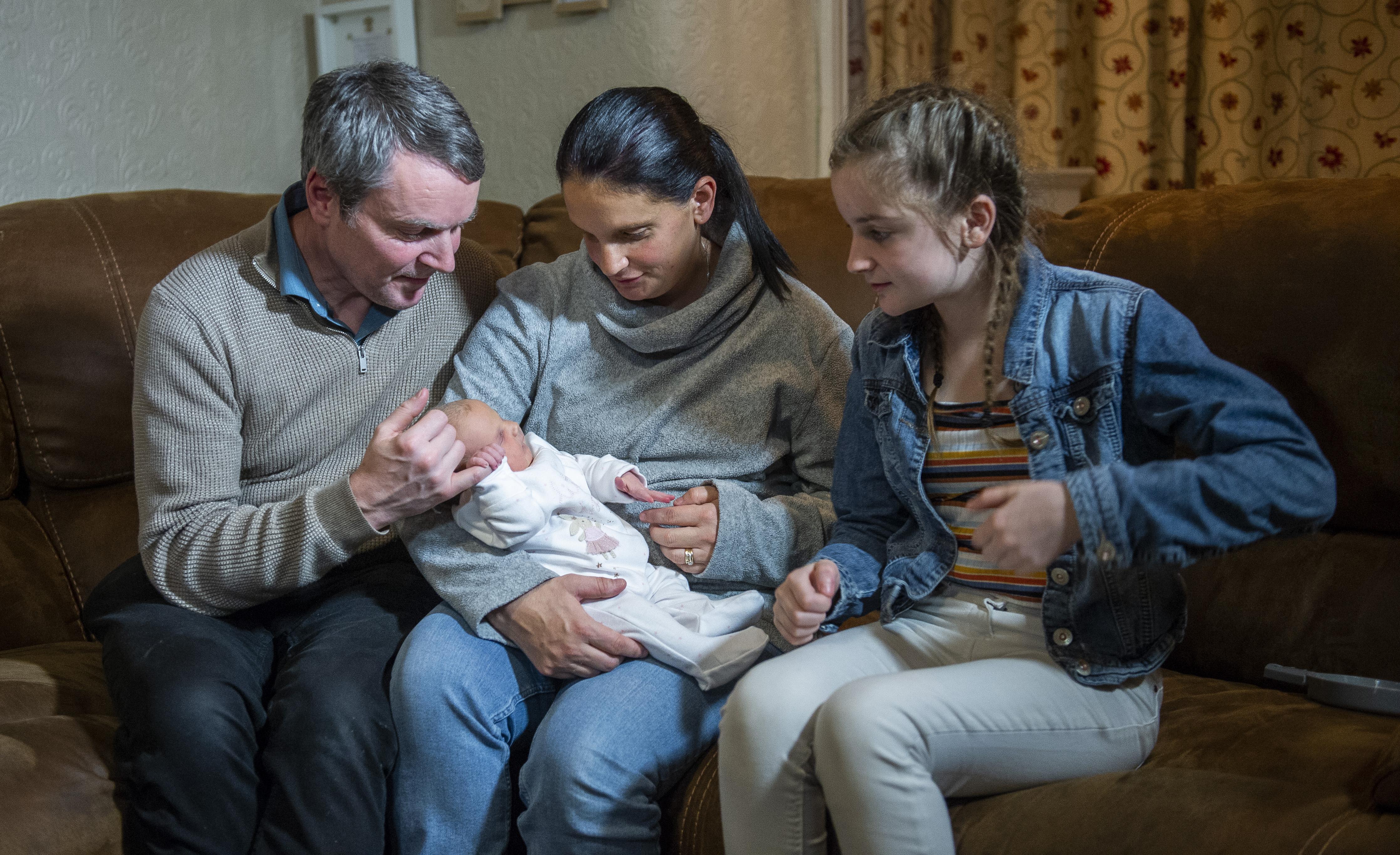 Eamonn joked: “Are you addicted to having children?”

Noel said: “I think we just loving having the kids and having a big family and welcoming a newborn into our lives. Not addicted but if it is an addiction we are giving it up.”

Sue added: “It will be strange to not have newborn in the house but then we’ll always have lots of grandchildren won’t we so it’ll never be a quiet house.”

Despite their insistence that they will stop at 21 kids, daughter Sophie, who has three kids of their own, doesn’t think her parents are finished having babies.

She said: “I felt like would have more, I’m usually right. I give it until April this time.”

When asked if she wanted a large family, like her parents, Sophie said she wasn’t sure.

She commented: “I see it on a daily basis and I couldn’t do that.” 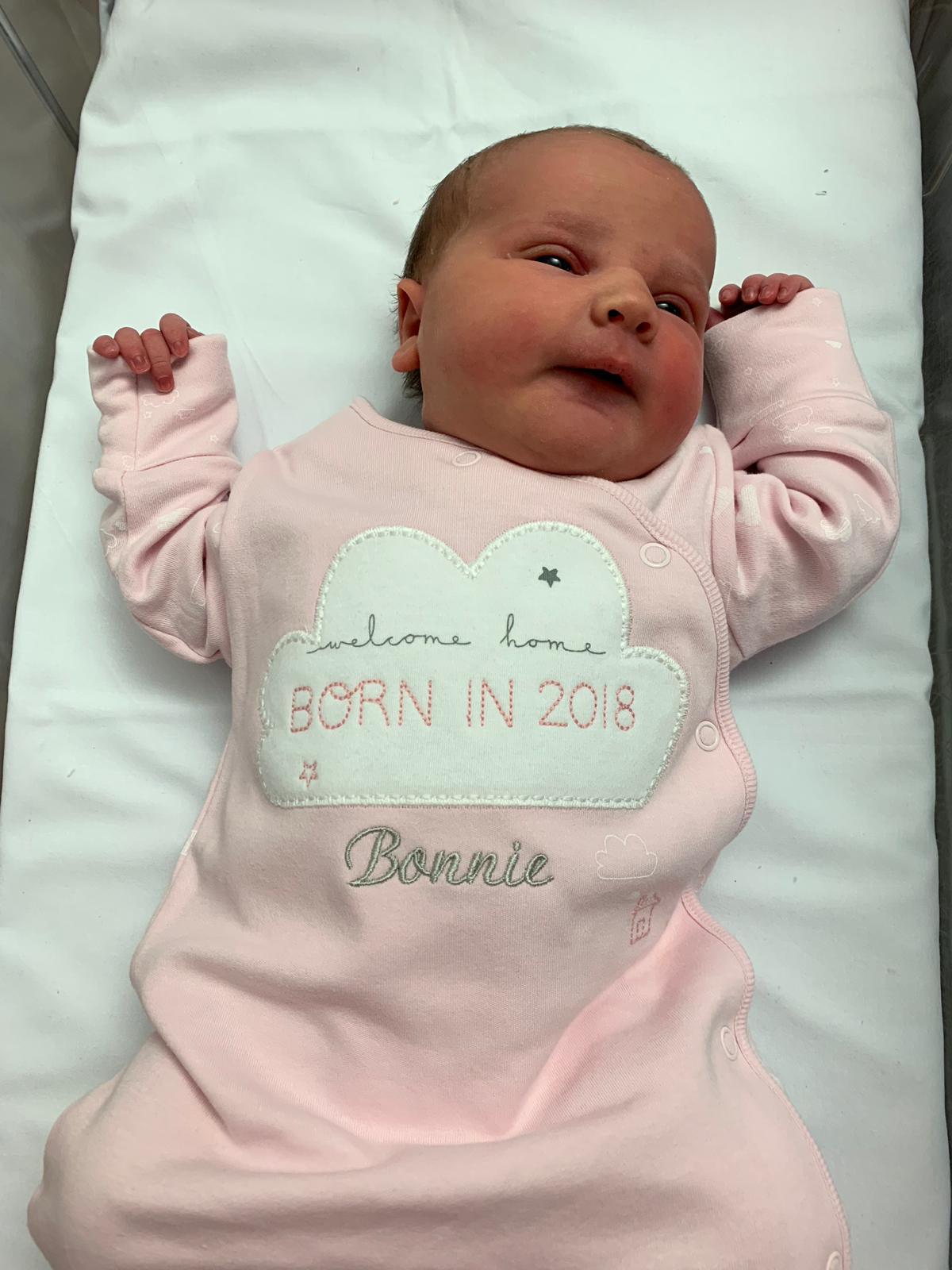 The family now run a YouTube channel which has racked up over 800,000 views.

Latest videos include the kids putting their Christmas tree up, making cookies and doing festive shopping.

Sue said the family has really enjoyed filming, but still is surprised people are interested by their everyday lives.

Ruth said: “I’m fascinated by you all the time. I just think of normal everyday things you do with one, two or three children but with this many children. I just don’t know how it works.”

Sue replied: “For us it’s just normal, but for everyone else.”

Previously, Channel 4 viewers left questioning whether Britain’s biggest family are ‘secret millionaires’ after they took all 20 of their kids on holiday to Florida.

This mum's tip for getting a baby to sleep all through the night might give you the few extra hours you crave.

And this mum was seeing red when her daughter's dad let her dye her hair BLUE.