IF your kitchen has seen better days and you don't have thousands to drop on sprucing it up, take inspiration from this thrifty DIY fan who transformed hers on a budget.

Laura Vaatstra, 30, a mum-of-two and customer service advisor, was quoted an eye-watering £5,000 for her dream kitchen – but decided she could do it cheaper herself. 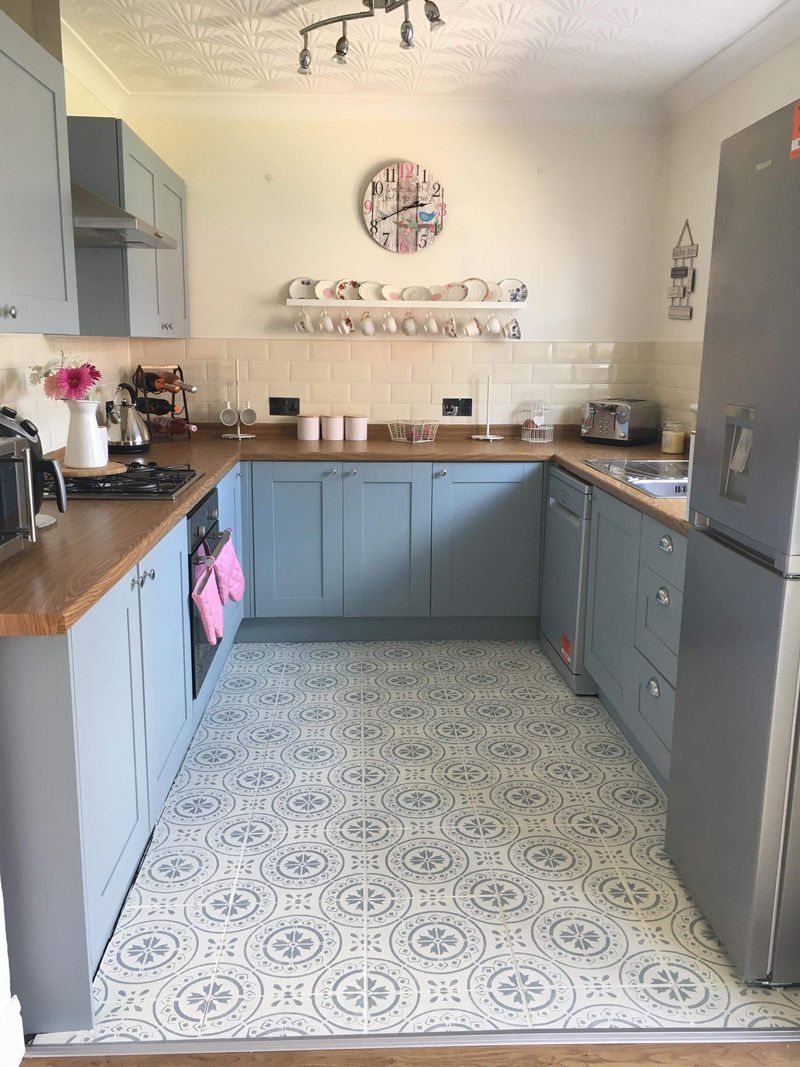 The expensive quote didn't even include labour or any floor and wall tiles, so, understandably, Laura wasn't going to settle.

The savvy mum, who lives in Cardiff with her fiancé Ben and their two sons, took matters into her own hands and spent just £144 transforming the dated kitchen into a stunning grey and pastel-toned space herself.

The magic materials included £48 Fablon from ebay, a £30 stencil and £36 of Frenchic paint.

Laura told money-saving community LatestDeals.co.uk: "I’d started off the year by getting a quote for a new kitchen which was around £5,000 – this didn’t include labour or any floor and wall tiles. 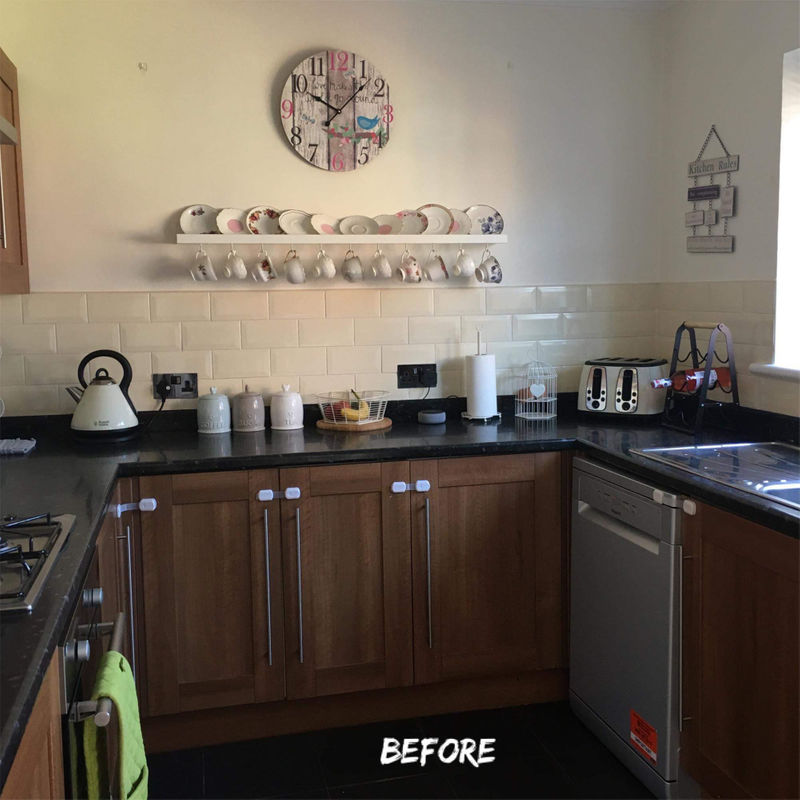 "This was out of our price range so after seeing so many people transform their kitchens on a budget, I decided to give it a go myself.

"I’ve never used Fablon before, never painted cupboards and never used a stencil before so it was all very new to me."

Detailing the process, Laura explained: "I started off by removing all the old handles from the doors. I filled the existing holes and sanded them. I then cleaned all the cupboard doors inside and out with sugar soap and sanded them lightly.

"Once they were prepped I started with the first, very light layer of the Frenchic Duckling paint. The advice given by Frenchic is to leave two hours between each coat. 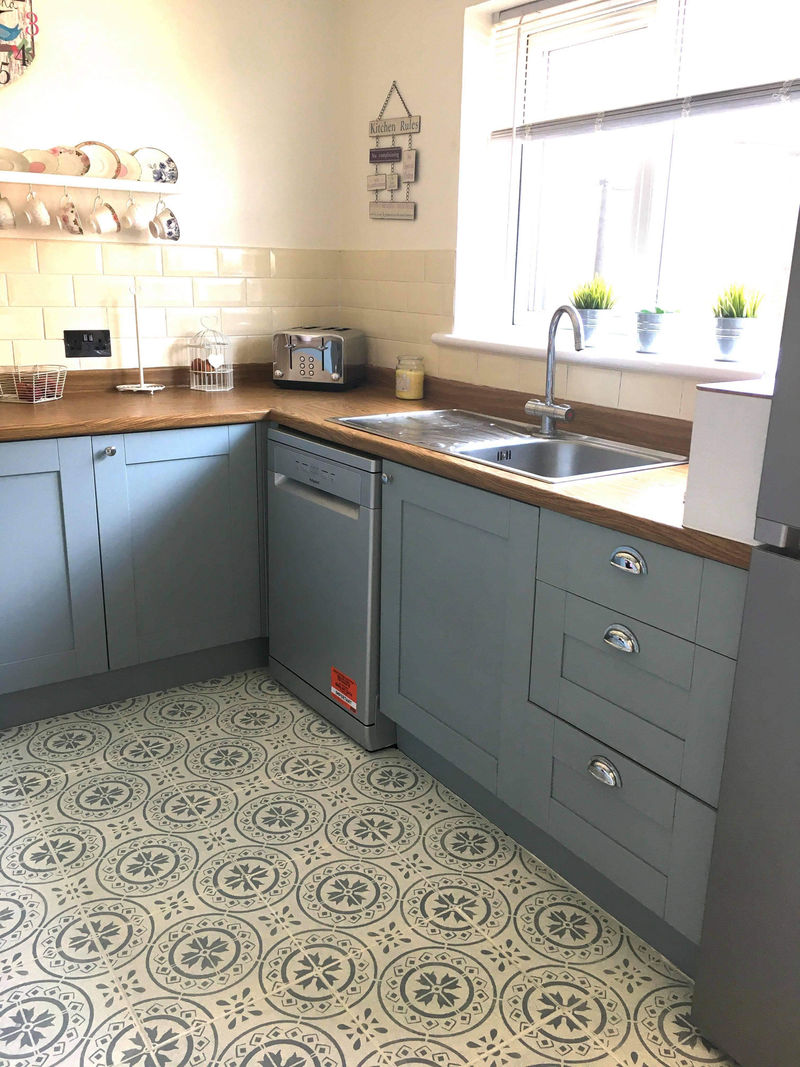 "I’d bought a round brush from Frenchic to use as it helps with the brush strokes. Once the first, second and third coats had been applied to all the cupboards, which took a few days as I could only paint when my one and three-year-old boys were in bed, I used a drill for the first time and put in the holes needed for the new handles.

"Once the new handles were on, I tackled the Fablon. I cleaned the countertops thoroughly and did one piece at a time.

"I’d bought one long roll (about seven metres) so that I would have as little joins as possible. The easiest way I found when applying the Fablon is to have two people – one to pull the paper off and one to smooth out the air bubbles as you go."

The thrifty mum-of-two said that it was a lot easier than she was expecting, considering she'd never done it before.

And added: "I’m very impressed with how it’s lasting so far. Unless you look very closely – it’s easy to think that I replaced the worktop with wood." 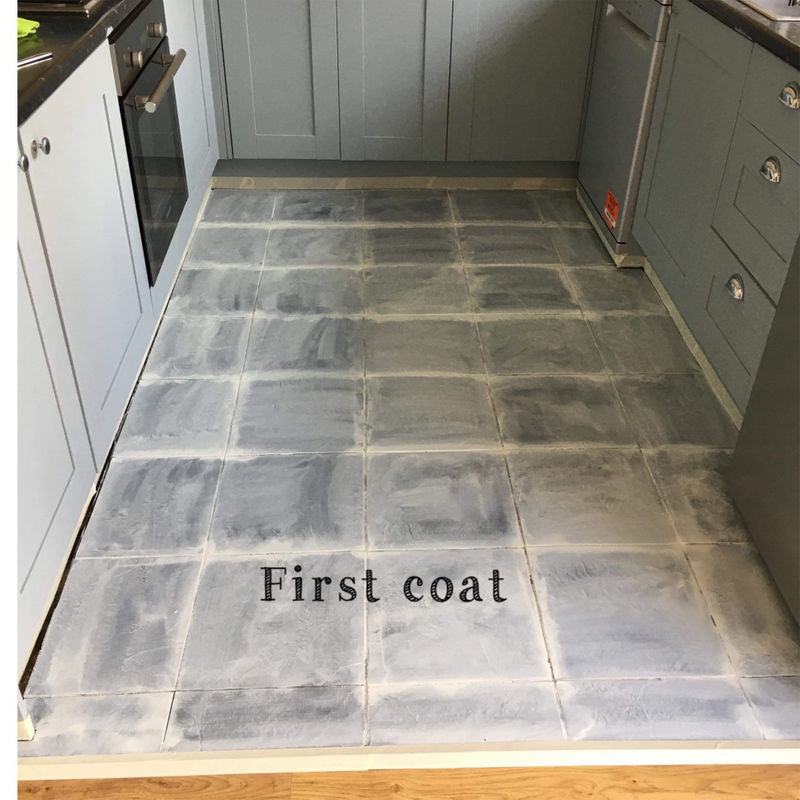 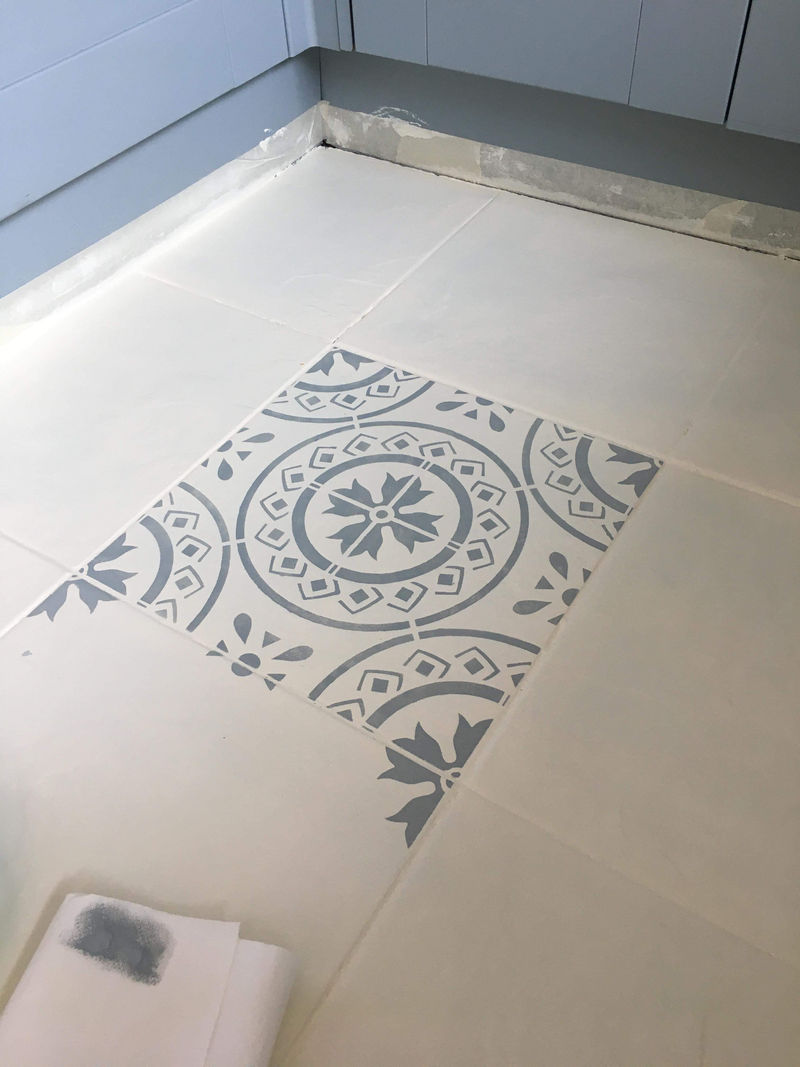 Next, Laura moved onto the floor and said " this was the part that I knew would make the biggest difference" so she most excited about getting it done.

She explained: "I cleaned the floor with sugar soap but didn’t sand this time as the tiles are fairly textured anyway. I put masking tape around the newly painted plinth and then used my Frenchic brush to paint the first coat of the Cream Dream paint.

"I won’t lie – it looked awful after the first coat as it needs to be very light. I waited two hours between each coat again and it took me about two days as I could only do it in the evenings.

"Once the cream was done with the five coats, it was left for about a week due to illness and my 30th birthday, so once it was ready for stencilling, I cleaned it again with sugar soap.

"I started in the middle of my kitchen floor and alternated the stencil so as to make sure that I wasn’t touching the tile I’d just done. I used masking tape to keep the stencil in place and used a face painting sponge with very little paint on to avoid any bleeding. 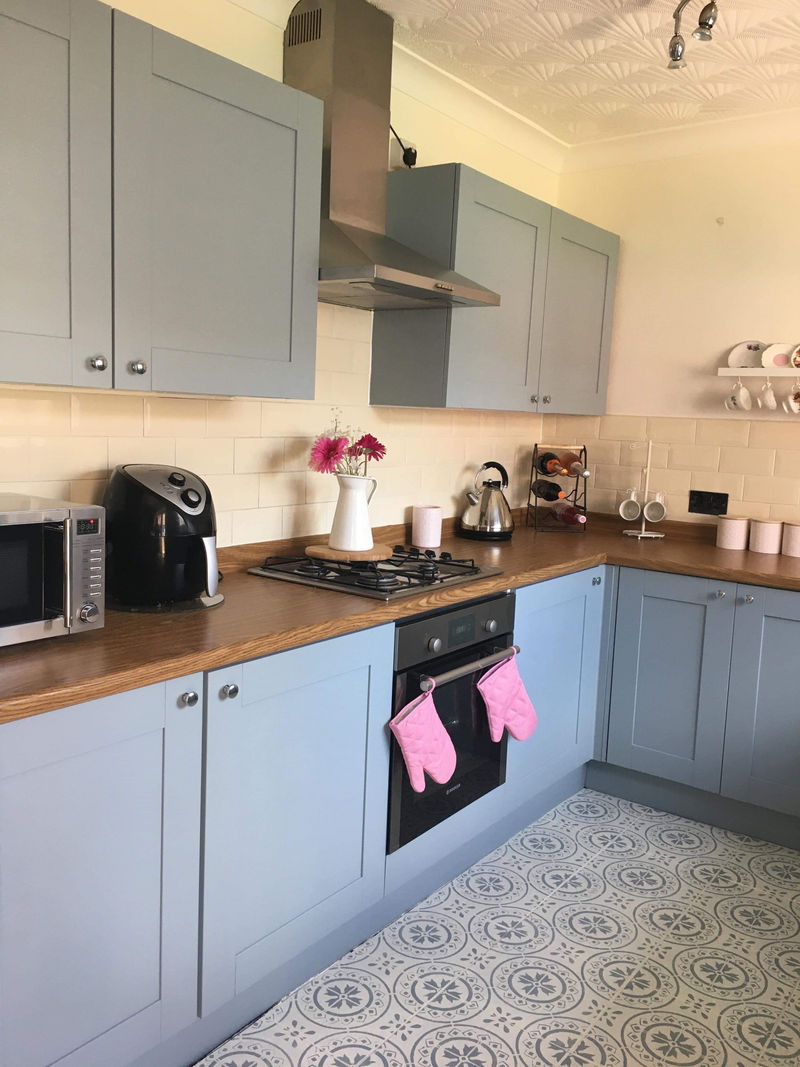 "Once all of the full-sized tiles were done, I started around the edges which were a bit tricky but not impossible – it just took a few goes to get it in the right position.

"I left the very tricky parts to the end (around the appliances and right in the corner) and then cut the stencil to make it easier.

"I really enjoyed the stencilling and am so happy with how it turned out – it saved me a few hundred pounds as I had planned on laying new tiles!

"With the paint, it’s best to use it like you’re running out – very thin layers. There’s plenty of YouTube videos showing how best to apply the Fablon and use a sponge for the stencil with the least possible paint – dip it in the paint and then onto kitchen roll. This should stop any bleeding."

In total, Laura spent just £144 on the whole kitchen, with the Fablon costing £48 from ebay, the new handles £30 from Amazon, £30 for the cupboard and the floor paint, and £30 forthe stencil which she bought from Dizzy Duck Designs. 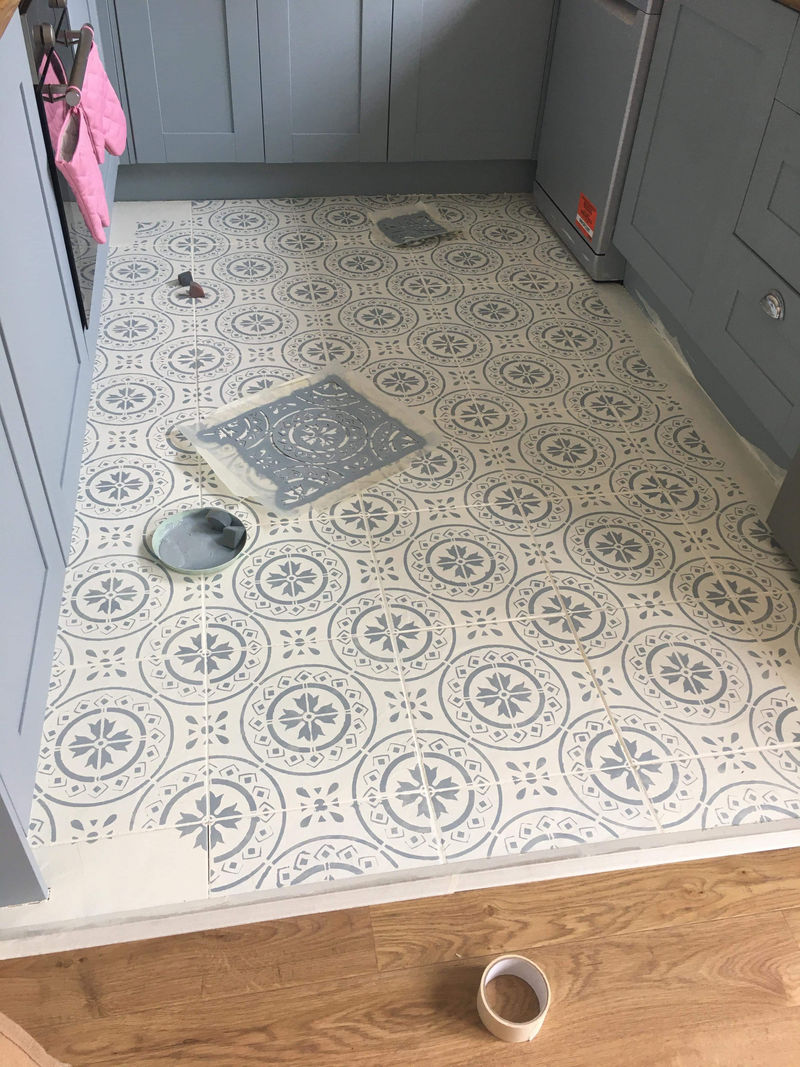 She revealed that the cupboards took about three days to do, and the floor about six as she could only paint in the evenings when her boys were in bed.

Laura is overjoyed with how her kitchen turned out – especially considering it cost just £144 instead of the £5,000 she had been quoted.

“I was over the moon,” she said. "I thought it would look nice when I pictured it in my head but it turned out so much better.

“The feedback from friends and family and people on social media has been amazing. The fact that I was able to do it myself and it only cost £144 was a massive bonus!”

Tom Church, co-founder of LatestDeals.co.uk, comments: “Laura has managed to get an expensive-looking kitchen for a mere fraction of what she was quoted!

“This amazing transformation just proves that you really don’t need to spend thousands to get your house looking Pinterest-worthy.

“Budget-friendly materials such as Fablon and Frenchic paint, and affordable finishes such as handles, can really make all the difference.”

For more kitchen inspiration, this DIY fan gives outdated kitchen an amazing makeover using Wilko bargains & saves a fortune by doing EVERYTHING herself.

Plus we also shared how a DIY fanatic completely transforms three-bed house in three weeks & did it on the cheap thanks to Dunelm & Ikea bargains.

And we reveal the best home transformations you can do for under £30, from hotel-inspired bathrooms to stunning kitchen makeovers.