The photographer Chi Modu was working for the Amsterdam News in 1991 and looking for freelance work. A fan of hip-hop acts like Run-DMC, the Beastie Boys and LL Cool J, he stopped by the offices of The Source, the small magazine that would become the most important rap outlet of the decade.

Mr. Modu soon found himself at work connecting with artists who oftentimes, at that point, were all but unknown. They would later become some of the most recognizable entertainers in the world.

The photographer, now 54, said that even back then, he was thinking in historical terms.

Thirty years later, Mr. Modu’s pictures of Tupac, the Notorious B.I.G., Snoop Dogg, Wu-Tang Clan and others comprise the foundational images of that era, in which rap went from a subculture to American entertainment’s dominant aesthetic. His portraits — of a stoic Biggie framed by the World Trade Center, of a shirtless Tupac staring at the camera — are indelible. 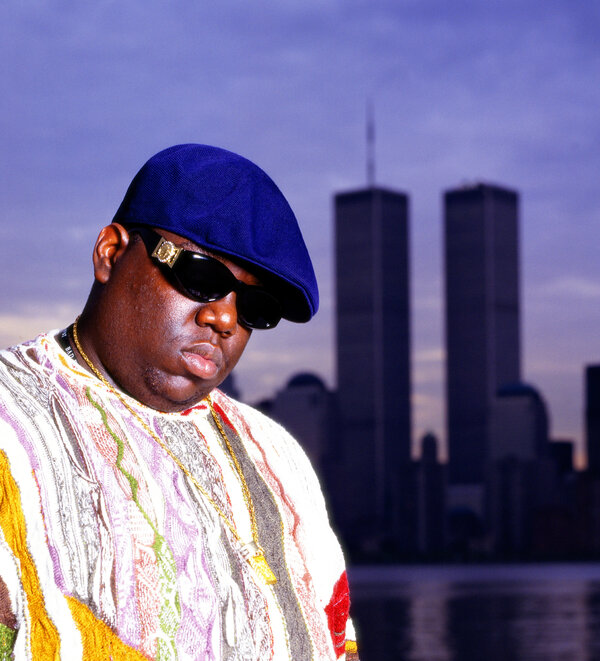 This fall, Mr. Modu has reaped the benefits of his work from the ’90s. In September, Sotheby’s sold eight of his photos at auction, among them the picture of Biggie in front of the towers, which brought in $30,240, and a portrait of Eazy-E that sold for $12,600.

And on Thursday, copies of Mr. Modu’s images of Tupac and Biggie will be available for purchase knitted into the fabric of 300 limited-edition luxury sweatshirts conceived by the designer David Helwani. The images are not screen prints, but meticulous recreations of the originals in seven different shades of yarn.

In partnership with Mr. Modu, Mr. Helwani will release 75 pullover sweatshirts ($395 apiece) and 75 hoodies ($495 apiece) featuring each image. The 300 garments will be available for purchase at a “virtual gallery” Mr. Helwani will host on his website starting Nov. 19.

“I wanted this whole project to be treated as an art project,” said Mr. Helwani, who recognized Mr. Modu on the street in SoHo in January 2018 and pitched him on the spot.

In the early 1990s, Mr. Modu’s collaborators at The Source couldn’t have known that his photographs would someday become luxury items. The magazine was small, and its staffers were working in a media environment that was unfriendly to the culture they championed.

But partly because The Source was one of few outlets covering the genre seriously, it became a one-stop shop for the artists and those who cared about them. Its staff forged close relationships with rappers who went on to be world famous. In some instances, the magazine played a key role in artists’ careers, bringing them to the attention of labels through its Unsigned Hype column.

“The Source was everything back then,” said Havoc, one half of the Queensbridge duo Mobb Deep. “You wanted to be in The Source because everybody looked at it.”

Along with his work for the magazine, Mr. Modu also shot album covers, including that of Mobb Deep’s 1995 record “The Infamous.” The shoot was characteristic of Mr. Modu’s exhaustive approach.

“I was getting tired,” Havoc said. “But he kept on trying to do different scenarios, and I thank him for that, looking back on it now. Because the actual cover of ‘The Infamous’ album to me, in my mind, it matches the content. We dealt with photographers before that. But with Chi it just felt different because it felt like he cared.”

Mr. Modu said that some of that trust came because his subjects understood how his life might intersect with theirs.

“I’m not from the hood, but they’re my people so I feel right at home,” he said. “I’m looking at a young Black man, out here writing lyrics that are driven by his experiences in America, of which I am as well. Our experiences may be parallel, at times intertwining.”

Mr. Modu’s photography introduced his subjects to an American youth that had been told that rappers were to be feared. Lawrence Ware, a co-director of the Africana Studies program at Oklahoma State University said that the pictures provided a much-needed counternarrative.

“The mainstream media at the time was painting these guys as kind of evil,” Mr. Ware said. “They’re scary, they’re damaging, they’re dangerous. The Source — and really Chi’s photography — did a good job of showing them as everyday people.”

For some, the increasing value of hip-hop artifacts can feel somewhat uncomfortable. After all, this was grassroots music, built from the bottom up. Mr. Modu acknowledged that ethos and said he strove to ensure his work was available to the public at various price points.

“Yes, I can have a piece move at an auction at Sotheby’s, but I will also sell you a $20 poster or a $1 postcard or a $2 greeting card or a $60 skateboard, because for some people, that’s all they can afford,” he said. “And they shouldn’t be denied the work.”

Cassandra Hatton, a vice president at Sotheby’s who curated the auction at which Mr. Modu’s photographs sold, said that it was important to her that the people who created the culture were rewarded for their contributions.

After all, collectibles from rock 'n' roll’s reign were long ago recognized for their value. Ms. Hatton said that there was no reason hip-hop should be any different.

“Why not?” she said. “Why not have this stuff be worth more than rock 'n' roll?”