A RICH Kid who lives off money from his wealthy parents is given a shock when he swaps his champagne lifestyle for living rough on the streets of London.

The uncomfortable experience proved all too much for pampered former ballet dancer Calum, 24, who only lasted one night before sensationally jumping in a cab. 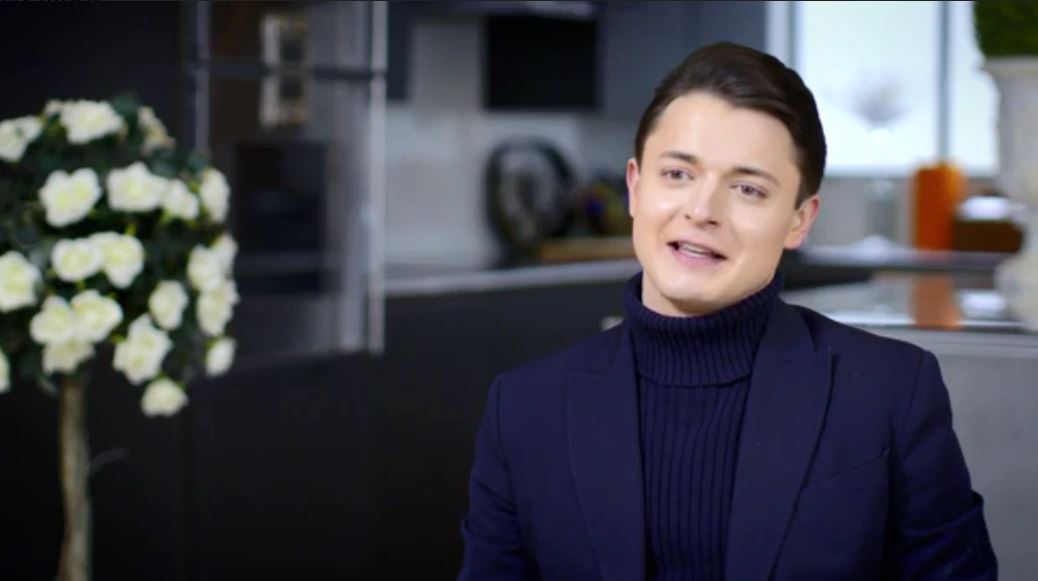 Calum took part in the social experiment for Channel 5’s Rich Kids Go Homeless and had a disastrous time from his very first night.

The privileged youngster doesn’t have a job as his parents pay for everything, and he admitted that he thinks homeless people are “lazy” and often “dangerous”.

He typically spends his time socialising, getting facials and his eyebrows done, jetting off on holidays that cost more than cars, and showing off his designer clobber.

Leaving behind his expensive wardrobe consisting of £4,000 Louis Vuitton and a £3,000 Givenchy bags, he is tasked with spending three nights on the streets in London. 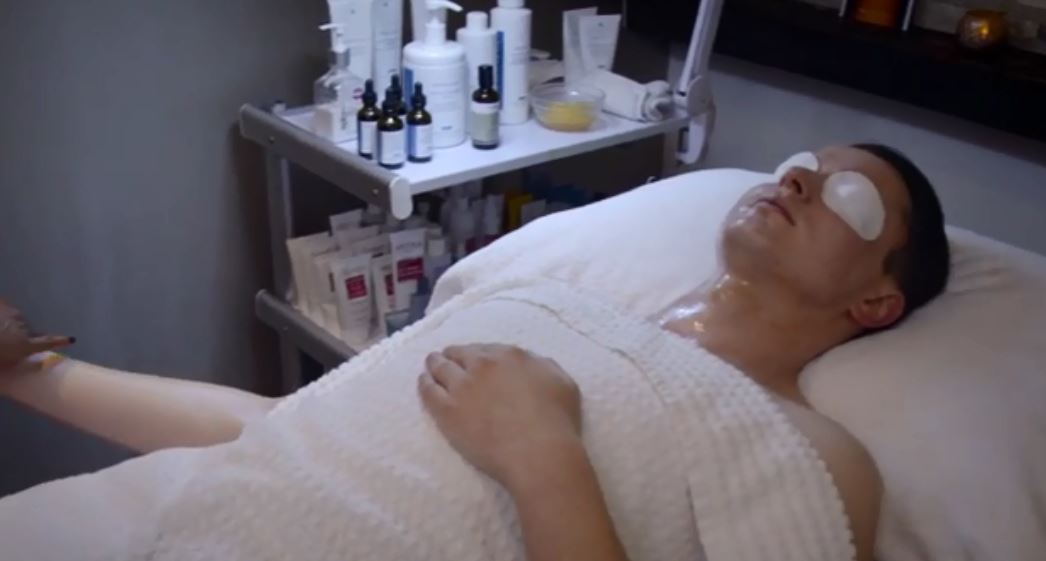 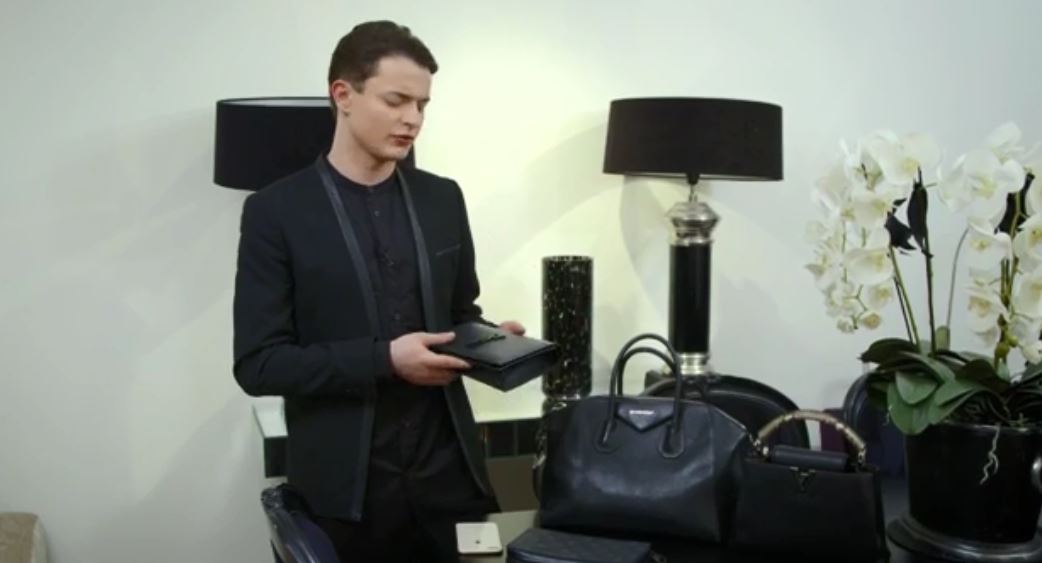 Before his first night, Calum says: “I think homeless people are sometimes potentially a bit dangerous, possibly a bit lazy, and in some circumstances are where they are because of drugs.

“But when they are just sat on the ground, it’s not something that I directly empathise with and they could be doing more to get themselves off the street.

“I have no idea how hard it is to get off the streets, I think it could be easy if I get enough money.”

He is forced to eat his words after being sent to the borough of Kensington and Chelsea, which may be one of the UK’s richest boroughs, but has the third highest homelessness figures nationwide.

Calum feels at home in the Chelsea surrounding, as he spends a lot of his time dining out in the expensive restaurants there, but finds it’s a whole different ball game when he's homeless. 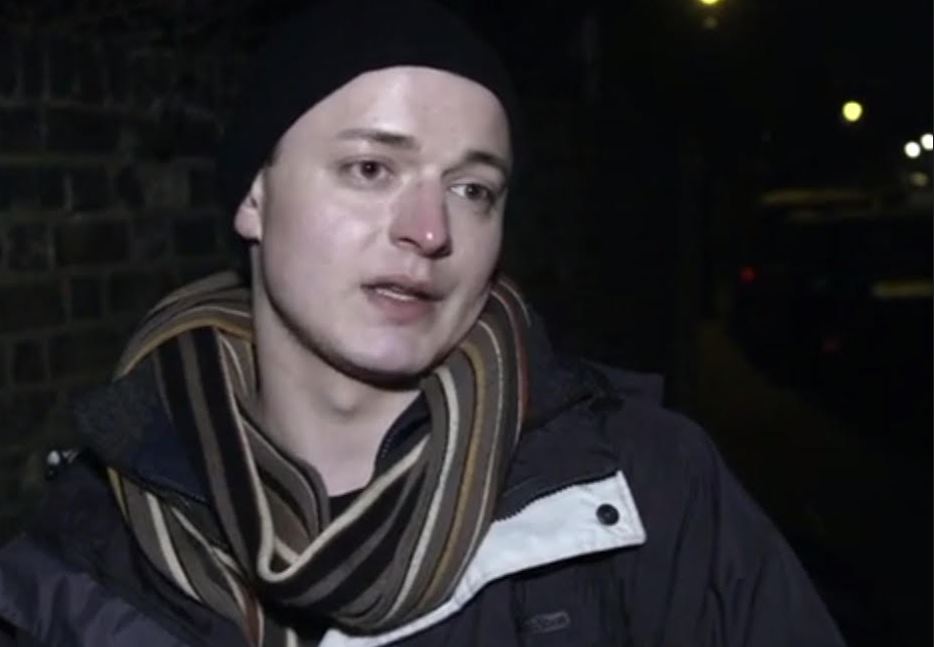 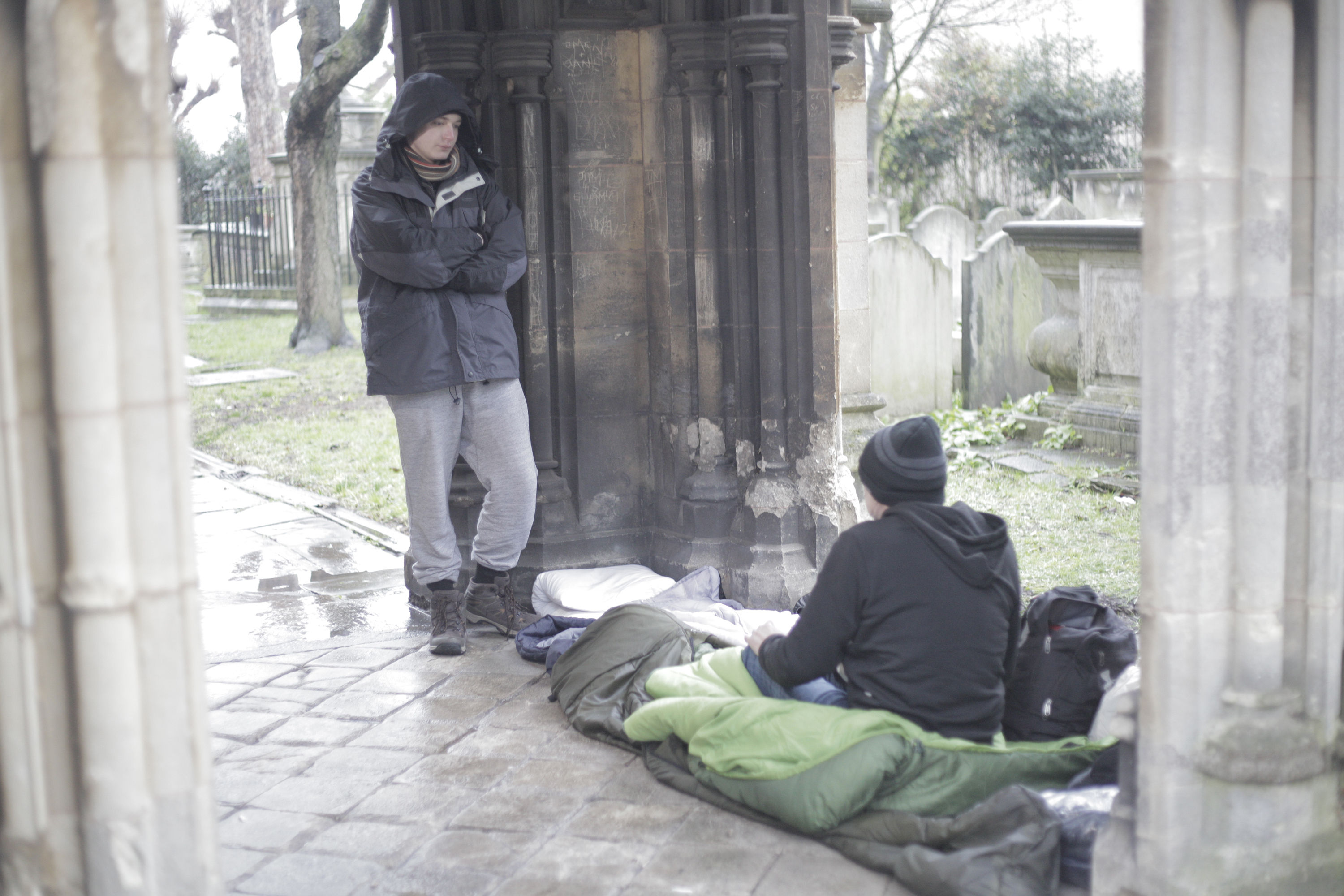 Armed with just his sleeping bag, he plans to beg for money from strangers and then sell flowers to couples, but on a chilly Tuesday evening he discovers hardly anyone is around to donate.

Cold and penniless, Calum says: “No one is out getting s**t-faced.

“I feel slightly lost. I’m just pausing and I’m not really sure what the next move is. I think there’s art to begging that I haven’t yet learned.”

His night goes from bad to worse when he’s forced to fish cardboard out of a bin to bed down for the night on King’s Road. 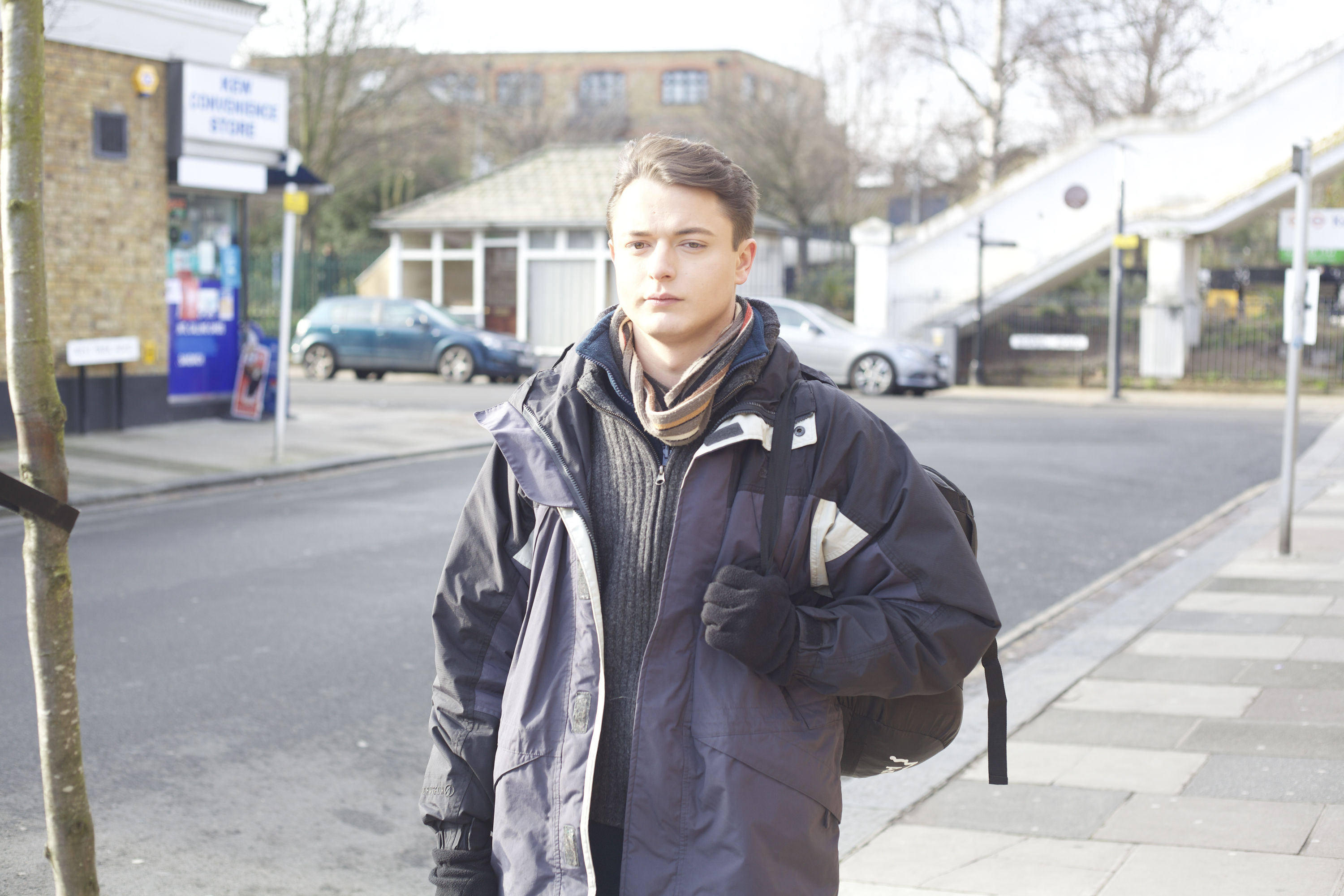 Calum only gets four hours sleep and wows never to do it ever again.

He says: “I can’t see myself doing that ever again. It’s just not worth the discomfort.

“It’s just painful sleeping on a slab of concrete. I’m getting into a bed somehow.

“I’m knackered, I’m freezing, I feel sick, my back hurts from the stone floor.

“I’ll sack this all off if I don’t get a cigarette. I do have the choice to sack it off and I will happily do so.” 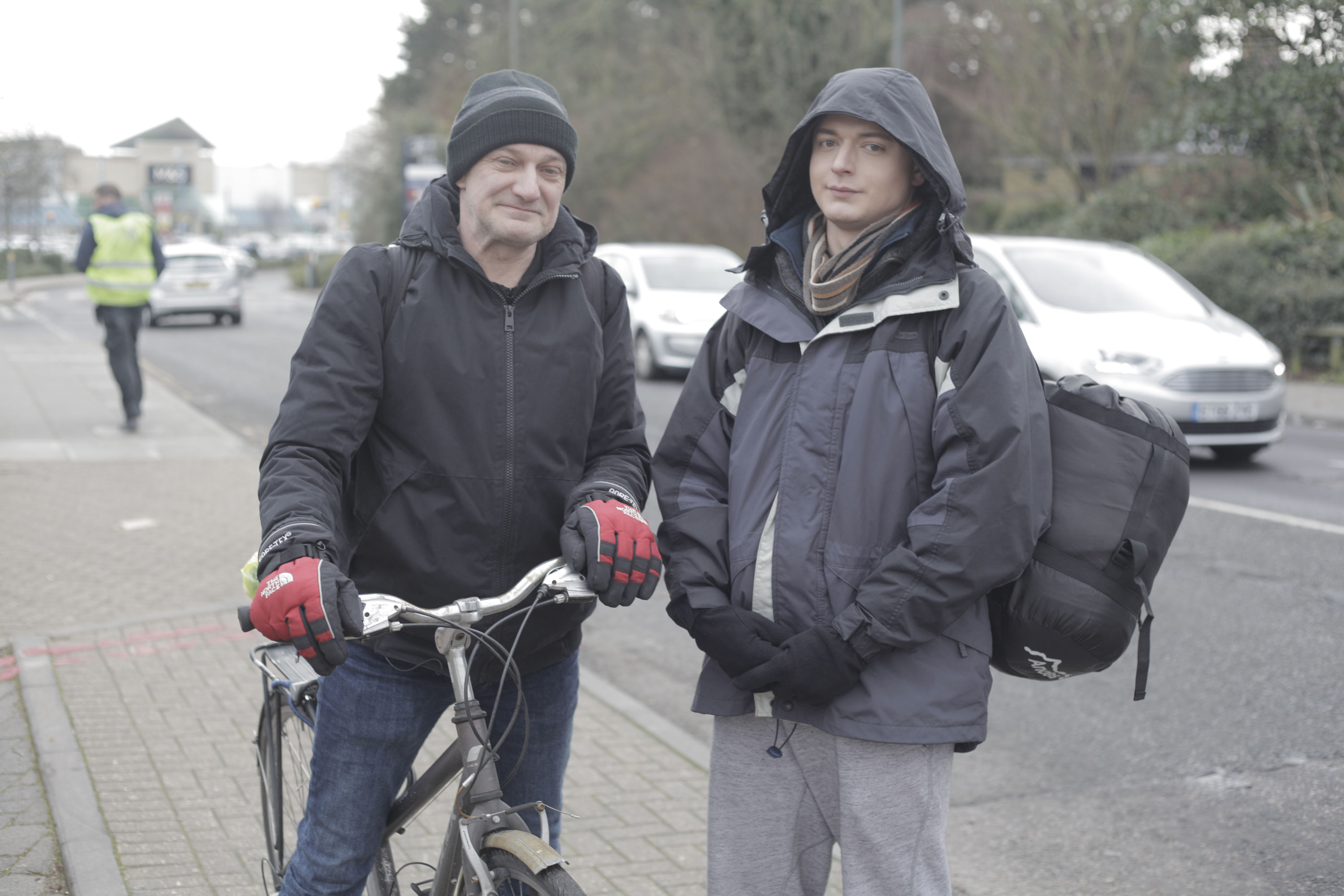 More troubles are to be had when Calum feels uncomfortable by the way people are looking at him.

He said: “A woman moved her child away from me. So much about being homeless I didn’t anticipate. I thought I could skim through certain things.

“Being looked at like filth is quite dehumanising. I honestly think this process isn’t for me.”

Things temporarily look up for Calum when he visits a homelessness day centre called St Cuthbert’s Centre, which gives him a warm meal and place to escape the cold.

He also makes a fellow homeless friend, 49-year-old Gert, who was from Belgium but has been in England for 13 years. 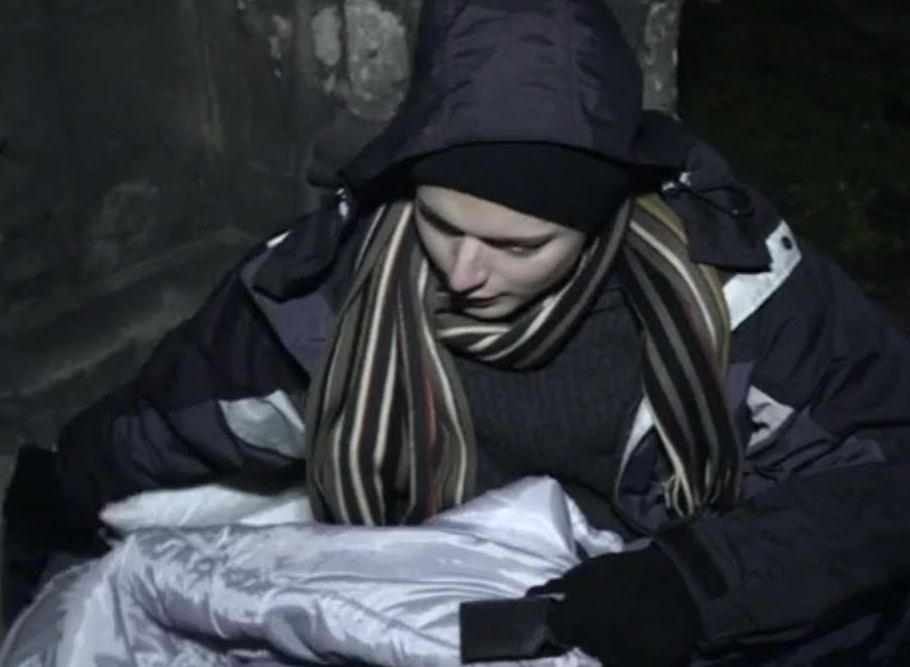 Gert has been sleeping rough for five years, after getting a pay rise at his job in a warehouse, which meant he no longer qualified for housing benefits.

He still works eight-hour shifts in his job, but is forced to sleep in the grounds of a church in Chiswick in order to save enough money to get a place of his own.

This is a shock for Calum, who had previously thought homeless people don’t work and just beg all day.

He said: “Associating homeless people with being lazy isn’t always the case. He contributes to society, he pays tax, he pays for a government that doesn’t look after him.”

Despite feeling sorry for Gert, who is bedding down for the night outside the church in -5C conditions, the process proves all too much for Calum.

It’s so demeaning to literally sit there and freeze to death is so awful.

Calling sleeping on the street “f***ing miserable”, he leaves Gert and gets in a black cab to stay in the warm at a relative’s house.

Abandoning the challenge, he enjoys a hot shower, comfortable bed and coffee.

“Selfishly I got home to my warmth, and then I was thinking about Gert. There was absolutely some guilt for being able to walk away.”

The next day he feels so bad about leaving Gert, he goes to meet him after his eight-hour shift at the warehouse. 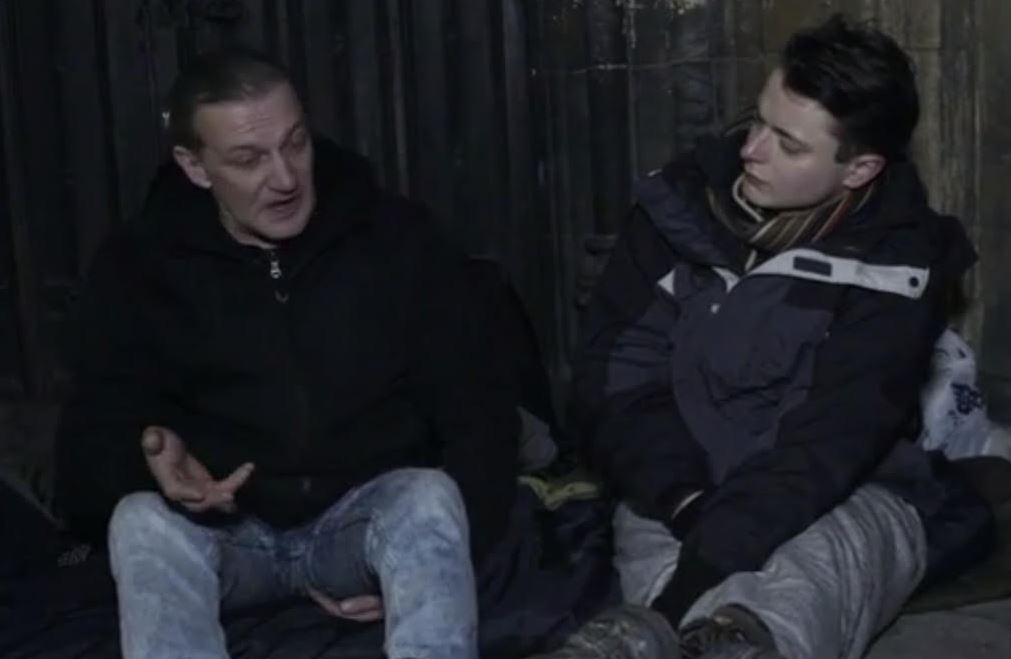 He sheepishly says: “It’s awful I have that option [to a home], it’s unfair.

“I have a lot of respect for him. He is not the type of homeless person I thought I would be meeting. He doesn’t seem to be living up to any clichés I had about homeless people.”

The wealthy Rich Kid decides to suck it up and spend his third night of the experiment with Gert in his usual spot in the church yard.

As they try and get warm in the snowy conditions, Gert reveals it can be a life or death experience on the street when it is cold.

He said: “Not long ago a guy died in his sleep from the cold, he was wet and cold. People can get pneumonia.”

Speaking of being homeless, Calum comments: “It’s so demeaning to literally sit there and freeze to death is so awful.

“There’s not just drugs and alcohol. People make an honest living, they just don’t have a key.” 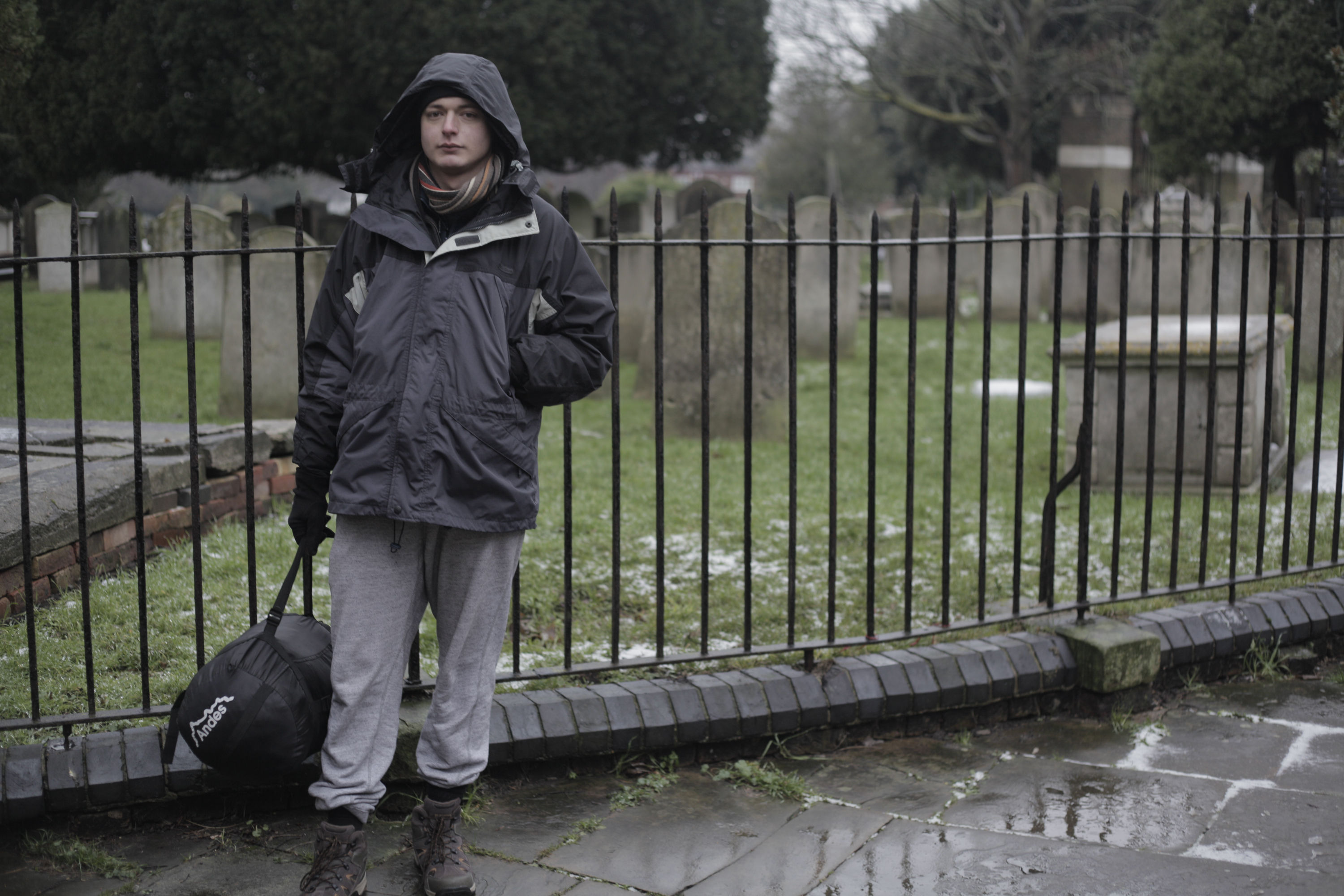 On his cab ride home, he reveals that his plan to get off the street by getting money was a complete failure, as he didn’t get a single penny.

He said: “My plan to get off the streets didn’t really go according to plan, I didn’t realise it would be that difficult.

“I didn’t manage to get anything, which is bad.”

It emerges that he has stayed in contact with Gert and is raising money for his pal’s day homeless shelter.

We shared how a millionaire trader, 22, is nearly stabbed and has to bathe in McDonalds as he swaps his lavish lifestyle for sleeping on the streets in Rich Kids Go Homeless.

We revealed how a millionaire’s son, 24, who only wears Versace, spends £20k on holidays and has a maid shocks skint mum after asking what a colander is.

And a Rich Kid, 18, who splashes £6k A MONTH on eating out thinks it’s ‘insane’ benefits family only have £50 a week to spend on food on Rich Kids Go Skint.