A BLOKE has been branded "tacky" for ditching his bride to chat to his groomsmen – mid-vows.

A clip has surfaced online showing the cringeworthy moment a husband-to-be walked away from his bride, right before he was meant to say "I do".

The couple are holding hands on stage when the officiant asks the groom if he’s willing to be "joined in matrimony" with his bride.

But rather than it being a romantic moment between the pair, the bloke says "hang on" before letting go of his bride’s hands, and bizarrely walking over to his groomsmen.

They then form a huddle while throwing glances back at the bride, who’s left standing alone in front of all their friends and family.

The groom eventually comes back to his confused bride, and after holding her hand again belatedly says "Ok I do".

Even the officiant appears shocked, as he tells the bride "you know I had nothing to do with that", as the guests erupt into laughter.

The clip was shared to Reddit where hundreds of people have commented on the clip slamming it as "tacky", with multiple women saying they wouldn’t stand for that at their wedding.

One woman wrote: “I thought it was super cringy too!! I'd absolutely hate something like that at my wedding.”

Another commented: “Agree! I see stuff like this and think it’s so tacky (like the cake toppers of the bride dragging the groom by the collar). But on the other hand, it’s not my wedding so.”

A third thought: “Personally, I would absolutely hate it. My wedding ceremony was important to me and I would’ve hated for it to turn into a big fat joke.

"I don’t like the whole 'groom must be dragged to the altar' thing, it’s tired and tacky.”

This person wrote: “To me personally, it's cringeworthy. I don't like planned lame jokes about the man having cold feet, nor would I appreciate my vows devolving into a joke.”

Agreeing, someone else commented: "I personally would hate it. I would probably cry right then and there."

While another added: “I’d kill him. That is not funny. It’s embarrassing because it’s stupid and not funny.” 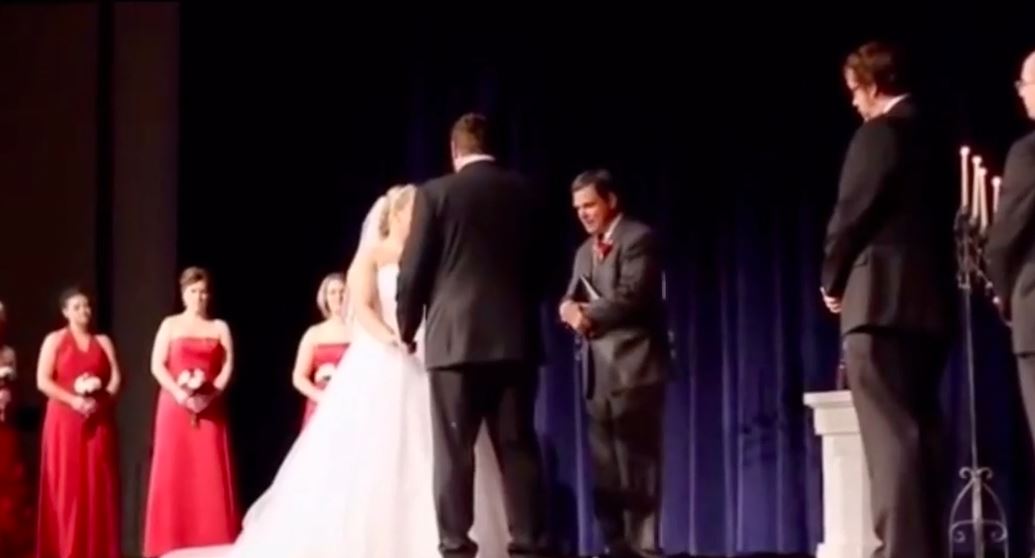 Meanwhile this couple’s supermarket wedding cake goes horribly wrong… but people reckon it serves them right for being so tight.

In more shocking wedding news, this bride who doesn’t have kids threatens to sack pregnant bridesmaid because she "won’t be able to handle" the job.

And this sassy bride sent a passive aggressive thank you note to her friend who wore white to the wedding.