A TEENAGER has revealed she sent her mum a picture of her new bedroom – but forgot to remove the handcuffs dangling from her bed.

The unnamed woman was pleased with her stylishly decorated room complete with wooden-framed bed so when her mum asked to see a snap she was happy to oblige. 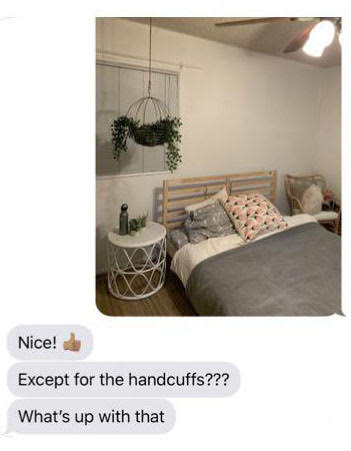 But she made a critical error – and didn't remove the dangling cuffs, presumably used during sex.

In a Reddit post which has been commented on thousands of times, she wrote: "Mom's been asking for pics of my new room… finally sent one.. I'm so stupid."

She attached her mum's cheeky response: "Nice. Except for the handcuffs… what's up with that?"

People thought it was hilarious – saying the mum knew exactly what she was doing. 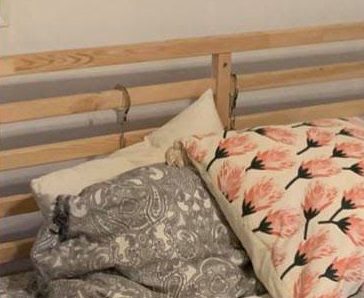 “'What’s up with that'- definitely mom," one person laughed.

Another said they expected the mum would repeatedly bring the cuffs blunder up. "If she's like most parents I know, because she knows it will embarrass the hell out of her daughter and finds it funny," they added.

"My mom would just make fun of me for it," another said.

And some people were more concerned about the impact the rough mental handcuffs would have on the wooden bed than anything else – suggesting she should opt for a soft leather pair in the future.

In more viral news, this woman came up with a brutal response to unwanted d*** pics – and it will strike fear in every man.

And this is the bizarre moment a topless Aldi shopper tries to buy milk as onlooker claims he’s ‘wired’.

Meanwhile, a woman recounts most chilling Tinder date ever – but is it real?