When my father ordered champagne, it baffled my boyfriend, but not me.

We’d been dating for about six months, and my parents were meeting him for the first time in 2001 at brunch at a French brasserie in San Francisco. It was the first time they’d ever met any of my boyfriends.

My immigrant Chinese parents had long made it clear that they weren’t interested in hearing about my dating life. They weren’t going to confront the possibility of my romances — which they considered a distraction from school and work — unless they thought I was on the verge of getting engaged.

By comparison, my boyfriend, a Californian of Serbian and Northern European extraction, had been introducing his girlfriends to his parents since high school. Even though he knew that meeting my parents was a momentous affair, he was only just starting to learn the nuances of cross-cultural communication — all that went unspoken yet was still understood in my family.

My mom didn’t scribble “I love you” on notes in my lunch. She didn’t pack my lunch; from early on, I did it myself. She and my father had demanding careers, and had raised their three children to be self-sufficient. Still, I knew that they loved me, in the jackets that my mother pressed on me whenever I was bare shouldered, and in the choice morsels that my father placed in my rice bowl.

The arrangement with my parents spared me from having to disclose my heartbreaks, and spared them from having to extend themselves to men who weren’t going to be around permanently, but also kept us at a distance — at least about my love life.

That’s not to say they didn’t drop hints about whom they’d like me to date: preferably someone of Chinese descent, perhaps with parents, like them, who came here on graduate school fellowships in science and engineering.

At 26, I was apparently approaching old-maid status, and my parents were eager to meet my boyfriend and my sister’s too, even though they weren’t of Chinese descent. I was just as eager to drop the secrecy about my boyfriend.

The dining room where we had brunch — airy, with soaring ceilings and Art Deco chandeliers — was glamorous and bustling. My father was a stoic man, unflappable, with a deadpan sense of humor, but he seemed achingly hopeful. Looking at the menu, he lit up. What better way to mark the occasion than by ordering a bottle of Piper-Heidsieck? As we clinked our champagne flutes over plates of waffles and omelets, my parents turned expansive about the past.

Decades ago, they’d served the venerable champagne at their own engagement party, a Chinese banquet in Chicago. A friend had been able to buy the bubbly on discount. The guests — fellow hungry Chinese grad students — had been ravenous, and my parents kept ordering more courses in a feast to remember.

My parents wed without having a chance to meet their respective future in-laws, who lived half a world away in Taiwan. In those days, it was too expensive to make an international call, let alone fly home. Their families held a wedding reception in their absence.

Over the next few months, my boyfriend learned how to navigate my family, addressing my parents with their formal titles — Drs. Sylvia and Lou Hua, acknowledging their doctorates, in keeping with the Chinese respect for education — and learning how to say “happy birthday” in Mandarin to my grandmother, who took his hand and burst forth with pleasantries he couldn’t understand. He nodded and smiled along, then maneuvered his chopsticks more handily than me at the dinner table.

My family could see that he was steady and attentive — the sort, like my father, who saved warranties and read the car manual from cover to cover.

That winter, we planned to travel to Peru, to hike the steep and winding Inca trail and visit the crumbling ruins of Machu Picchu, using the Spanish we’d learned in the class where we had met.

When I told my mother in a weekly phone call, she insisted that we book separate rooms.

“It’s safer if we share the same room,” I said.

“People can be animals,” she said. We’d never had the talk about the birds and the bees, unlike my boyfriend, whose mother had given him a book in elementary school on such matters.

I tried not to laugh.

“Tell her that her daughter can be the animal,” my boyfriend said mischievously in the background.

Not only was I dating someone who made me laugh and believed in me and my dreams, who accepted my quirks and my family’s, I was learning how to share more of myself to my parents. Around them, I finally could be whole, Chinese and American.

The following autumn, I ran the Portland Marathon, my first. I’d been training all summer, logging in miles before and after work and on weekends. After driving to different spots on the course to cheer me on, he met at Mile 20, with a bag of gummy bears, and we ran the rest of the way together. In the final stretch, he carried on a one-sided conversation, keeping me going when I no longer had the strength to talk.

That day, I realized that he would always be there for me, by my side, but my parents weren’t as sure.

We like him, my mother said. “But maybe you should see other people.”

They’d waited a year, expecting our imminent engagement. My boyfriend and I were in our late 20s, having fun, and we still had time. I didn’t want to set a deadline.

At Thanksgiving, the issue of marriage weighed even more heavily on my parents. My mother pulled me aside and asked if I liked my boyfriend, who was downstairs. “Do you really like him?”

“Yes, Mom.” I had to get back to chopping onions and celery for the stuffing.

“If he asked you to marry him, would you?” she asked. I bolted from the room.

After dinner, at the doorway of the house, my father said brightly, “Call if there’s any news!”

We were leaving for a trip to Thailand and Cambodia the next day. My cheeks hot, I climbed into the car with my boyfriend. Why were they being so pushy? After years of silence about my love life, my parents were clamoring to get involved, but I didn’t want him to feel pressured.

A week later, he proposed, at dawn at Angkor Wat, Cambodia, as the sky lightened from pink to gold to blue above the temples. He carried around the velvet box in his travel pouch, sticky against his body, as we toured the sights. 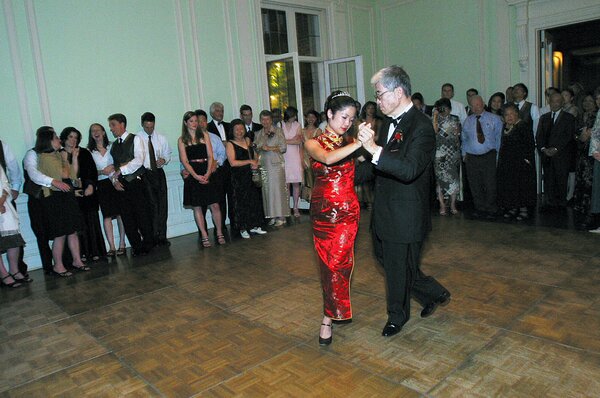 Unbeknown to me, he’d asked my parents for their blessing just before Thanksgiving. He had a business meeting nearby, and called ahead to see if my parents could meet in the late afternoon. He understood without being told that they would appreciate this gesture.

“It will have to be an equal marriage,” my father told him.

“Please don’t say anything to her,” my boyfriend said. He explained that he wanted the proposal to be a surprise in a memorable spot.

Surprises were another American ritual that my parents didn’t quite comprehend. When we were children, if they bought us a birthday or Christmas present, they often gave it to us immediately. Why wait, when you could use that outfit or play that video game now? They tried their best to keep the proposal secret.

Planning our wedding, we asked my parents if there were any lucky or unlucky days, based on the Chinese calendar.

“Superstition,” they told us over the phone. “Pick any day you like.”

We picked the following Saturday: 4/24.

On the other hand, though, the date had an abundance of unlucky 4s.

“Four plus four is eight,” I told myself, which is a lucky number in Chinese culture. Maybe my interpretation wasn’t orthodox, but I was adapting it.

We’ve been fortunate in our 16 years of marriage and the countless toasts that have followed. Throughout it all, my husband has proved to be even more filial than me.

Once, as we set off on our family’s annual holiday walk around a reservoir, it started drizzling, the clouds low and gray, and the wind brisk. My father had been diagnosed with Parkinson’s, which slowed his steps, and completing the hilly, three-mile loop had taken on an even greater significance.

My husband held a large umbrella over my father’s silver hair, and left his own exposed to the elements. He stood tall — his shoulders broad, his hair wavy, chestnut, and rain flecked — beside my father, elegant in his topcoat. That evening, we would dine on dishes from East and West, and toast to our health and wealth over glasses of champagne.

But first we finished the walk together, one step at a time.

Vanessa Hua is the author, most recently, of the novel “A River of Stars.” She lives with her husband, Marc Puich, and their two children in the San Francisco Bay Area.