Victorian Labor's branch stacking woes went far beyond one factional warlord, with a review into the scandal finding the practice was able to thrive in an environment of organisational inertia, a poor culture and almost no party governance.

The five-month investigation into the scandal, led by former premier Steve Bracks and former federal MP Jenny Macklin, found the methods used by factional kingpins within the party had become "more sophisticated" and the scale had "brazenly increased". 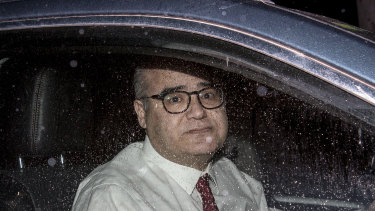 Adem Somyurek was forced to quit as a minister in the Andrews government after branch stacking was revealed.Credit:Eddie Jim

Mr Bracks and Ms Macklin, who have run the Victorian division since it was put into administration following an investigation by The Age, The Sydney Morning Herald and 60 Minutes, will ask the Australian Labor Party's national executive to dramatically overhaul its membership rules in 37 recommendations to stamp out the practice.

The report confirms the "cleansing" of 1710 Victorian party members so far in the past months who were deemed "non-genuine", with a recommendation that none be allowed to rejoin the party until after December 31, 2023 and only then with the requirement of the approval of two-thirds of the administrative committee.

Among the recommendations are mandatory photo ID checks for all new members – which is likely to face a backlash from some factional figures – and that no more than 20 new members of a single branch be given voting rights in a single month.

Branch stacking involves powerbrokers organising large numbers of people, often from ethnic groups, to join the party to influence key ALP processes, including preselections for federal and state seats. In some cases the people are not even aware they are party members.

Under the recommendations new members will have to attend one branch meeting in their first 12 months of membership and will only obtain voting rights 24 months after their first attendance.

They will be forced to apply online through a system run by the party's head office, while those members who cannot access the internet will be given hard copy forms or speak over the phone to a co-ordinator in the state office.

The report urged the Victorian Labor Party to adopts a formal membership target of 20,000 members by December 2024 – an increase of about 7000 on its current levels – saying the best way to quash branch stacking was through the "weight of genuine members".

As foreshadowed earlier this month, local branches will be merged into a single branch in each Victorian state electorate, with geographically large regional seats or districts with more than 300 members able to have two branches.

The Andrews government was rocked in June when three of its cabinet ministers – Adem Somyurek, Robin Scott and Marlene Kairouz were forced out in the scandal.

Mr Somyurek was sacked by Victorian Premier Daniel Andrews as local government and small business minister and resigned from the Labor Party, ahead of a move to expel him. He had denied the branch stacking allegations.

Mr Scott and Ms Kairouz vowed to clear their names and said at the time of their resignation they did not want to cause a distraction for the government or add to their families' distress.

The review, obtained by this masthead, said the revelations had "shocked members and the public and damaged the Labor brand" and had showed a "contempt" for Victorian Labor's rules and values.

It was scathing of the party's administration and membership oversight.

"Organisational inertia, poor culture and a level of acceptance of the practices meant requirements under the Rules were not always observed, the administrative process and systems were poor, and the governance and assurance overseeing membership was practically non-existent," it said.

The 56-page document warned the "scourge" of stacking had continued through previous reviews and "those who trade in it have adapted in response to rule changes made to inhibit the practice".

"Their methods have become more sophisticated and the scale has brazenly increased. Rule changes may impede branch stacking, but rules alone will not break it," it found.

It says an audit will continue to investigate those who may have stacked branches, breached party rules, or "otherwise damaged the Labor brand".

"Those who caused such profound pain and shame to our Party must, and will, be held to account," the report said. "We are confident that once this work has finished, we will have, to the extent possible, brought integrity back to the Party membership roll."

It found volunteer party officials, as branch secretaries had too often been the co-ordinators or key lieutenants of branch stacking operations.

"These key lieutenants, in turn, place unreasonable expectations on party staff to act in their own
narrow factional interests, rather than the wider interests of the party for which these staff are
employed. This has the effect of putting staff in invidious and conflicted positions, and distorts
the key functions of party branches."

The report supported the ALP's national executive decision to suspend preselections until
after the next Victorian and federal elections, with recommending the next state conference should be held between January 2022 and May 2022.