Sydney street artist Anthony Lister has released a video promoting a new exhibition about masks and head hunting, as he prepares to face trial over allegations he drugged and sexually assaulted several women.

Less than two minutes long, the video depicts close-up shots of art works, superhero comics and books on Picasso, Cezanne and other artists. A computer-generated voice narrates a short blurb about the exhibition, which is "coming soon" to Melbourne. 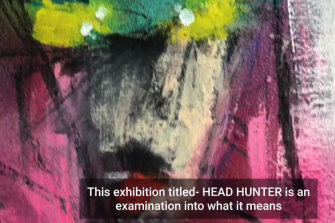 The video was sent to email subscribers of the artist on Wednesday, one day before his next scheduled court mention over allegations he sexually assaulted five different women between 2015 and 2018.

Mr Lister, 40, was first arrested at his Darlinghurst home in March and subsequently released on bail. In June he was charged with another 11 offences, including drug possession and supply. 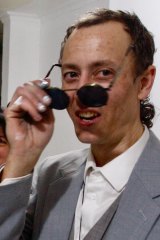 Lister at the opening of an exhibition in 2019.Credit:Dean Sewell

The alleged female victims did not know each other but all allegedly met Mr Lister through the art scene, three of them as students. They all reported the alleged assaults to police independently of one another over the three years to 2018.

One of the women claimed she was intoxicated at a party in Redfern in 2015 when Mr Lister tattooed three lines on her body. He is defending all charges.

Titled Head Hunter, the upcoming exhibition is "an examination into what it means to be a member of a society that collects things, whether … artworks, football cards, shoes, followers on Instagram".

In the 90-second video a robotic voice-over states that "masks are fascinating … made and worn for centuries … for individuals to break out of the human constriction and morph into another form".

It describes humans as "primitive beings [who] feel the urgent need to be different, to impress, to bewilder and to instil fear, so that they may make themselves revered and respected".

With criminal charges and a court trial looming for Mr Lister, it remains to be seen how the exhibition will be received by the art world.

In March, Wollongong Art Gallery cancelled an exhibition by Mr Lister, as well as associated events and classes, after his arrest. 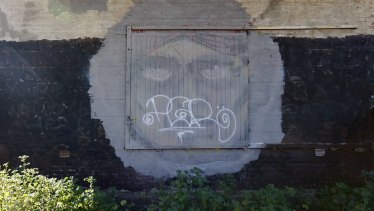 “Not welcome:” A mural by street artist Anthony Lister was covered over after it was discovered he had made his mark in Katoomba’s street art gallery without permission.Credit:Dean Sewell

The mural was received poorly by locals, who believed Mr Lister was responsible. They quickly covered the work with graffiti, spraying the words, "You're not welcome here".

Manager of the Mountains Youth Services Team Kim Scanlon said the unauthorised mural was painted over two nights and had not been approved by application to street art curators.

"Council told us to paint over it and make sure we put a notice over it," she said.

"People can respond to him, because they feel indignant he can just show up and whip up a mural on a wall," he said.

"It used to be that people would say, 'wow, what a cool guy'. But now they are saying, 'we don't want that brand', which he has spent so long cultivating. It has suddenly become a tainted brand."

Mr McDonald was among those in the art world to receive the Head Hunter video on Wednesday and said he expected the announcement to be received with "indifference."

A brief mention of the charges against Mr Lister will be heard at the Downing Centre Local Court on Thursday.

The most important news, analysis and insights delivered to your inbox at the start and end of each day. Sign up to The Sydney Morning Herald’s newsletter here,  The Age’s newsletter here, Brisbane Times‘ here and WAtoday’s here.