A Batgirl superfan has revealed how she’s spent £10,000 on costumes and a ‘bat cave’ in her garden – and her daughter’s name is even a nod to villain Poison Ivy.

Katie Howett, 27, from Leicestershire, regularly dresses up as the female superhero, and has made three-month-old Ivy her very own Batmobile.

The mother-of-one, who is in a long-term relationship, now attends ComicCon events with her daughter, with the pair both dressing up together.

Katie, who is a nanny, explained how she had wanted to be Batgirl since she was at school, describing her as ‘an ideal of how you can lead your life’. 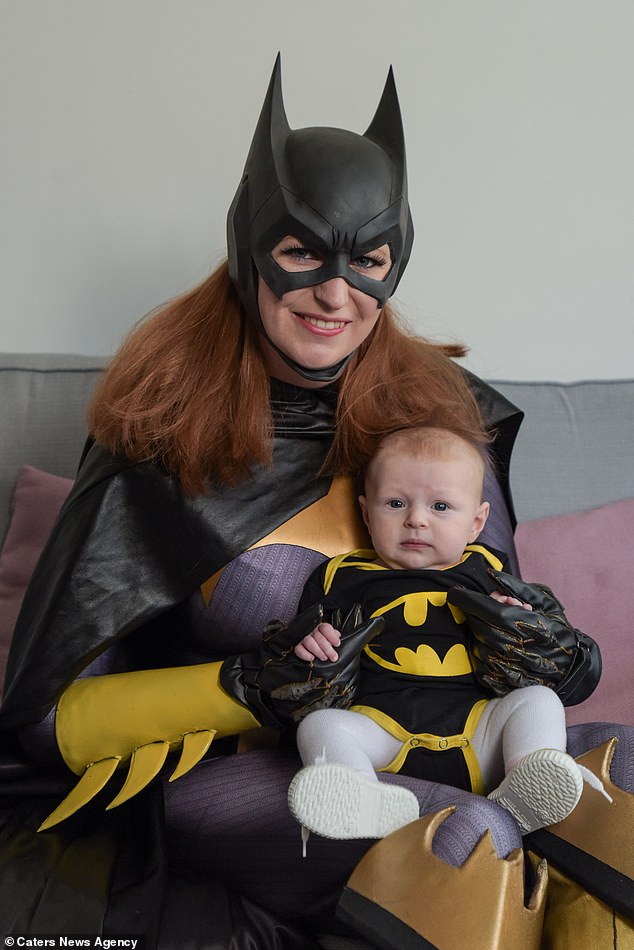 Katie Howett, 27, from Leicestershire, has revealed how she’s spent  £10,000 on costumes and a ‘bat cave’ in her garden, and has even named baby daughter Ivy (above) after Batman character Poison Ivy 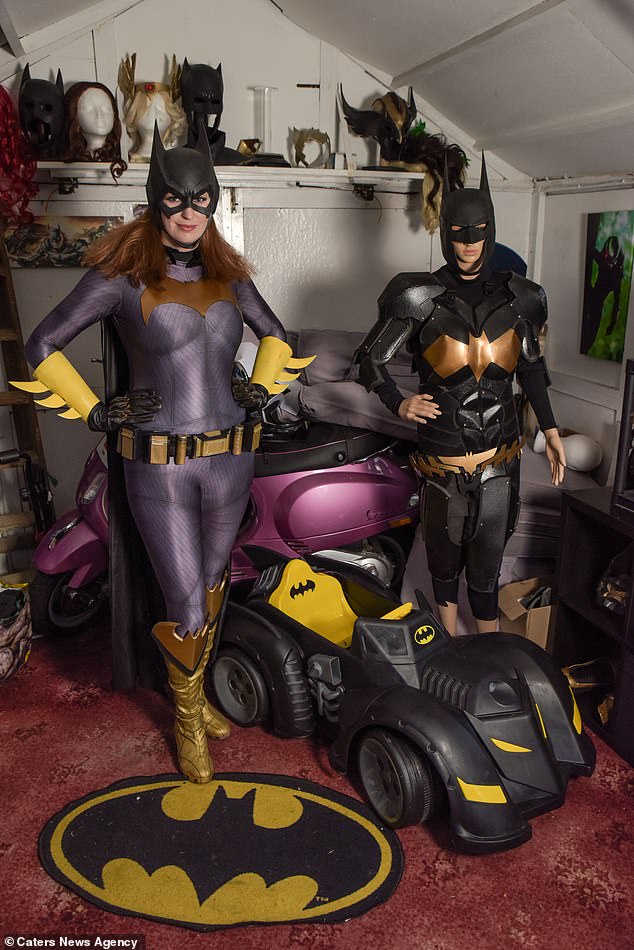 Katie (pictured in her Batgirl costume) has even created a ‘bat cave’ in her garden (above), which is full of Batman and Batgirl memorabilia

Katie said: ‘Dressing up a superhero, you leave the outside world and enter this super world.

‘Children’s faces lighten up when they see you and say “Wow, it’s Batgirl”. For a brief afternoon you’re not your usual self. You’re not Katie, you’re Batgirl.

‘You become that character and lose yourself to this other identity.’

Explaining the thinking behind her daughter’s name, she said: ‘When I had Ivy I thought the name was perfect. 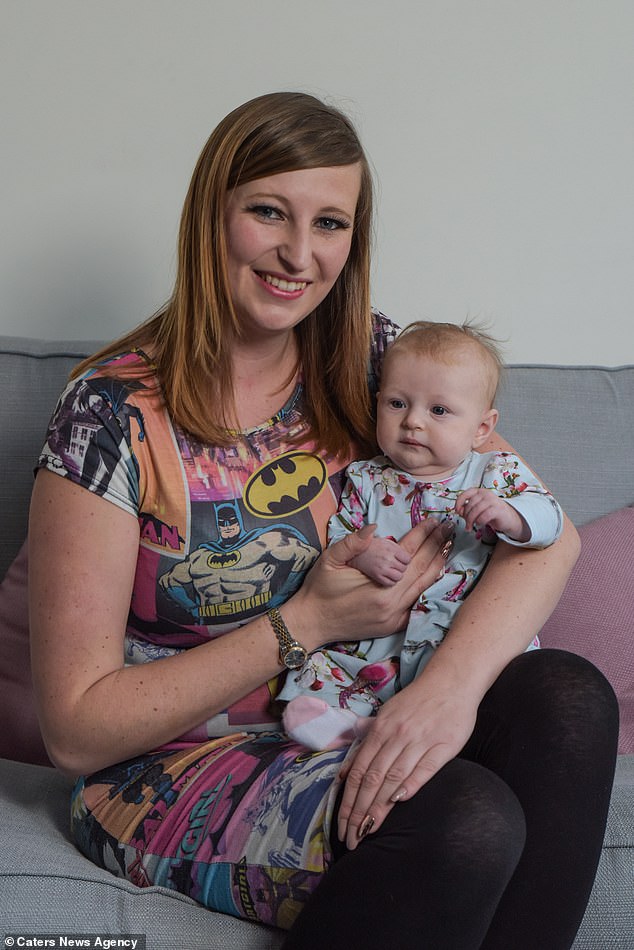 Katie said the name Ivy was perfect for her three-month-old daughter (above) as it is ‘an old fashioned name’ but also reminds her of ‘one of batman’s villains’, Poison Ivy 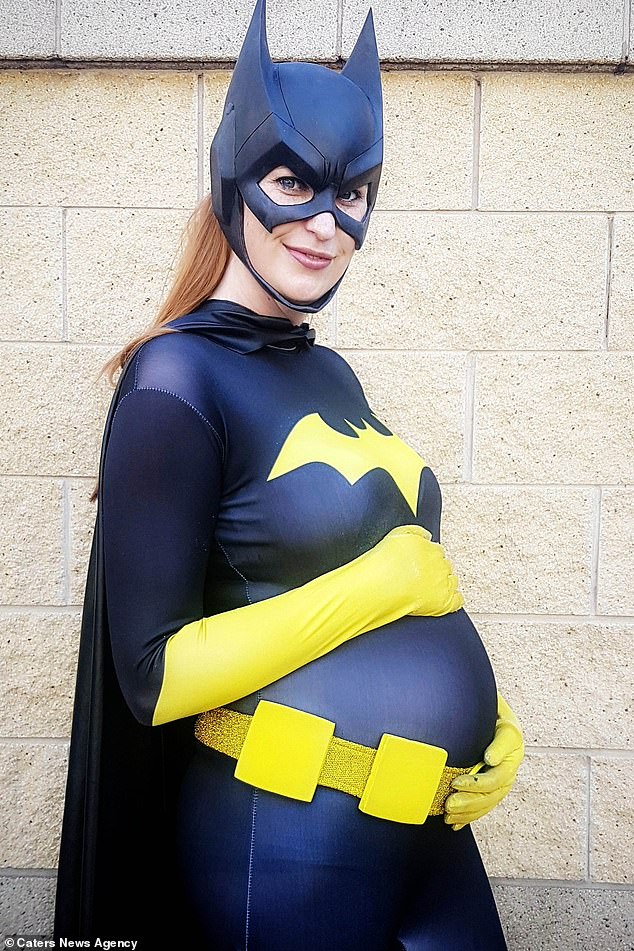 ‘It’s an old fashioned name and it does remind me of one of batman’s villains [Poison Ivy].’

Katie explained how her love of Batgirl began while she was still at school. ‘When I was at school I wanted to be Batgirl,’ she said.

‘She’s not just a woman, she’s an ideal of how you can lead your life while doing good. She’s always been my role model.’

However, it was when she attended a  MCM Birmingham ComicCon in 2015 when her obsession really began. 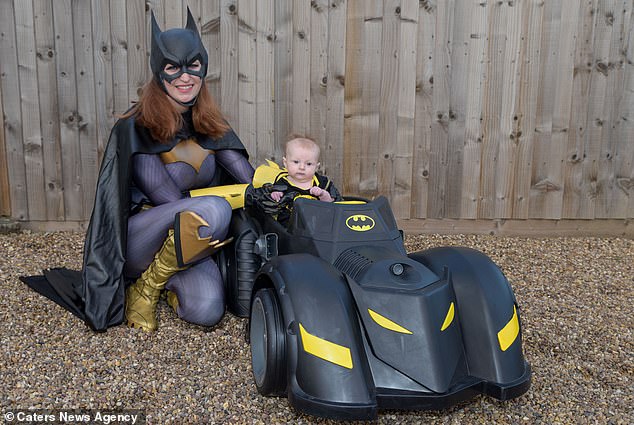 Katie has even made a Batmobile for daughter Ivy (above), with the pair regularly going to ComicCon events together

Katie (pictured above in costume) explained how Batgirl’s personality is what she loves about the character, describing her as ‘an ideal of how you can lead your life’ 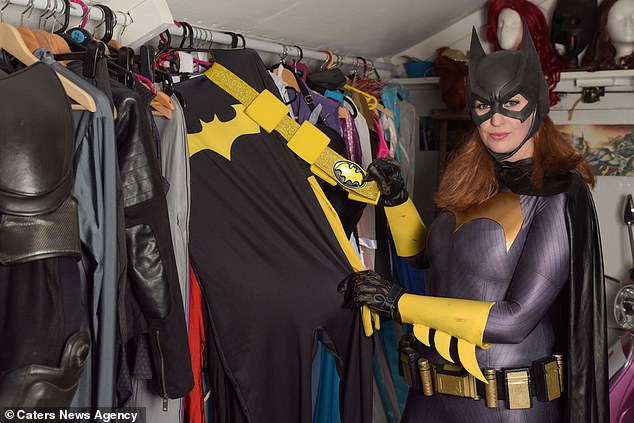 Katie, who is a nanny, has transformed her garage into a ‘bat cave’, splashing out thousands of pounds on costumes

Katie said: ‘At the event I noticed the Batman and Batgirl costumes and was transfixed by them.

‘But it wasn’t until I watched the Killing Joker [film] that I thought it would be great to do Batgirl cosplay to turn everyone’s heads.

‘Before I did cosplay I felt adrift, but then this Batsuit came along and when I put it on it just felt right.’

After buying her Leicestershire home in 2015, Katie has transformed her garage into a ‘bat cave’ where she painstakingly prepares each costume. 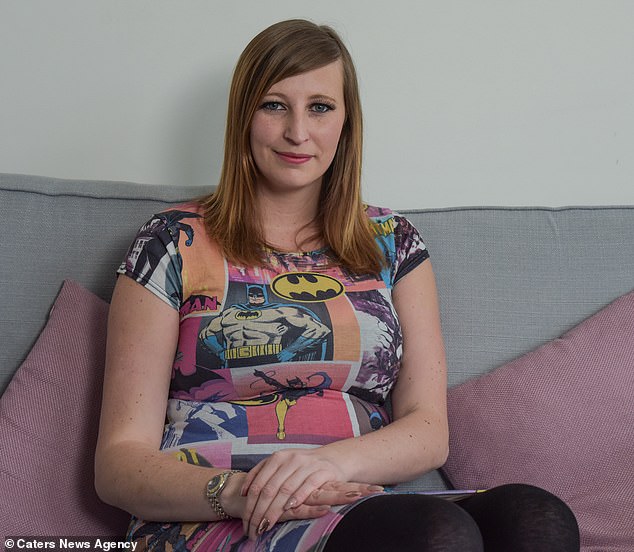 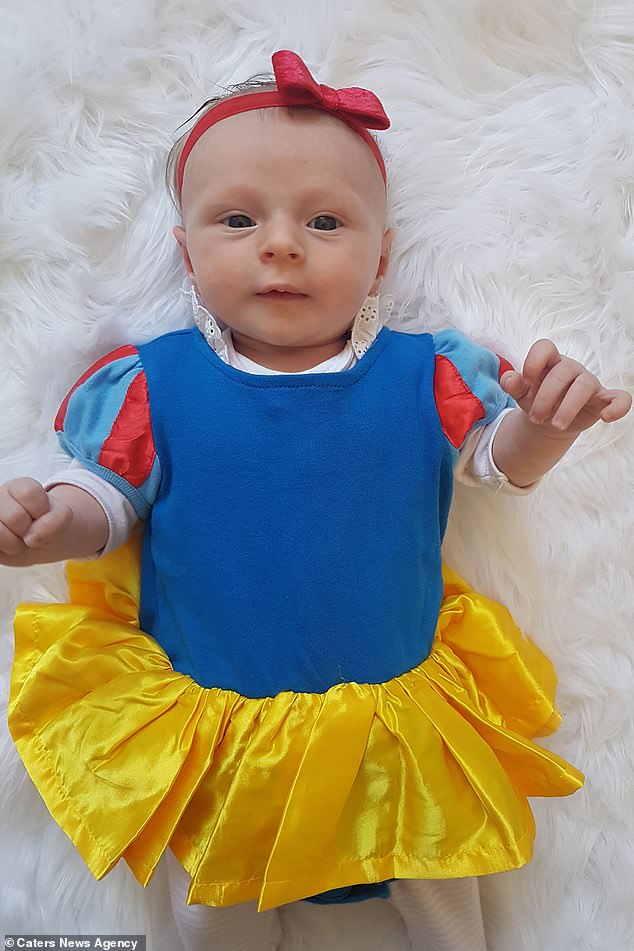 Katie often dresses up three-month-old baby Ivy in costumes. Ivy is pictured above at 10-weeks-old in a Snow White outfit

‘The bat cave gives a place to store all of my costumes and to prepare myself for when we get into roll.

‘It also gives me a bit of fun to be able to say to people that I have my very own secret lair.’

Katie bought her first costume in 2016 and says she hasn’t looked back – and said Batgirl’s personality is what she loves about the character.

‘I chose Batgirl because she’s a superhero that’s not as commonly cosplayed,’ she said. 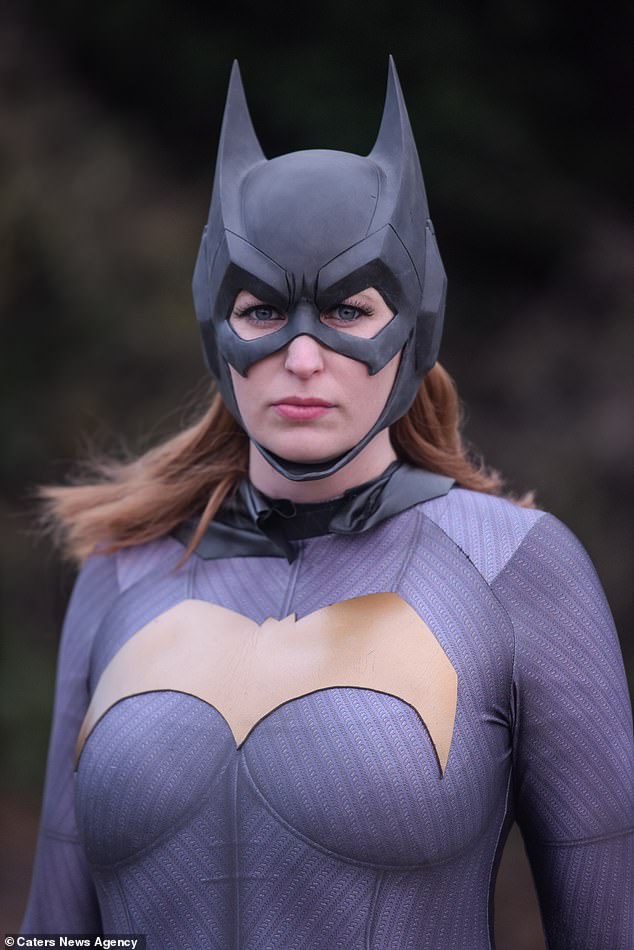 Katie explained how she bought her first Batgirl costume in 2016, after attending a ComicCon event, and says she hasn’t looked back 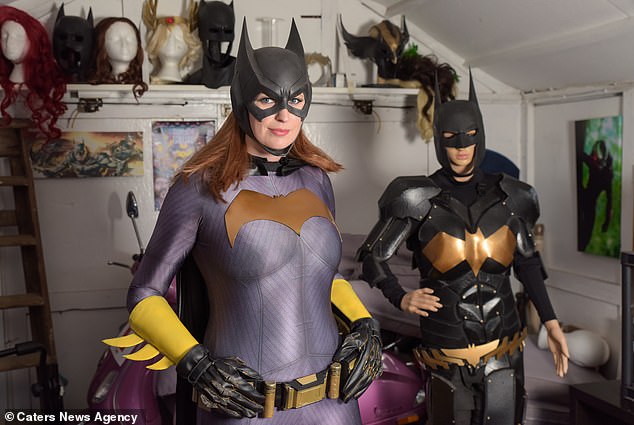 ‘Even after her accident leaving her in a wheelchair she takes on a new identity and uses her computer expertise to help Batman. She always seeks to help.

‘She shows that nothing holds her back from being a true superhero and helping people. And she has some pretty awesome suits!’

‘I’ve put a huge amount of work into the costume. It’s quite badass and just love it. It’s fun to be a superhero.’

She added:  ‘Now I’ve got Ivy it definitely draws a lot of attention to us at ComicCon events. She’s always smiling and giggling when we’re out.’ 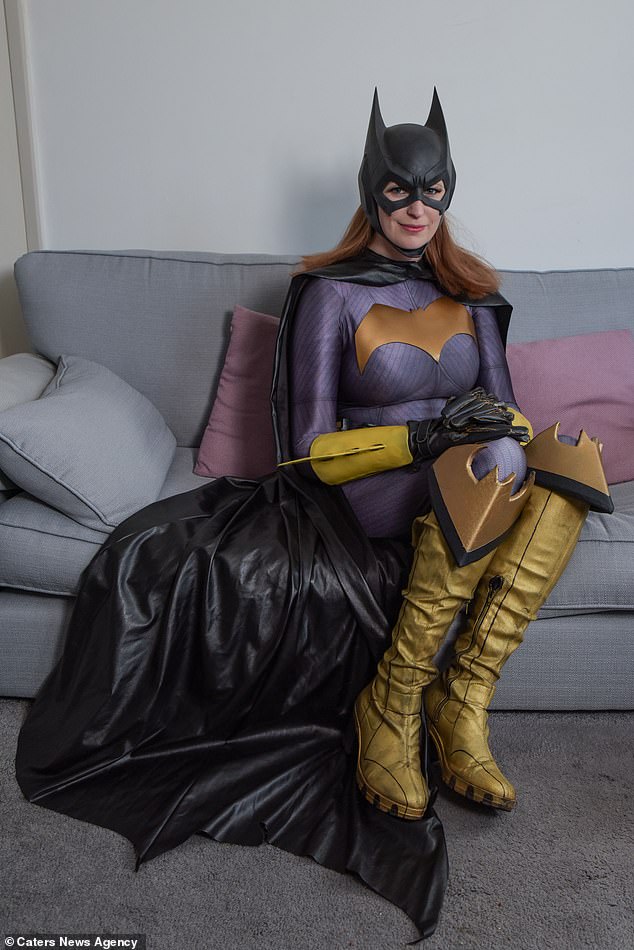 Katie (pictured in her bat girl costume) said she felt ‘adrift’ before doing Cosplay, adding that ‘it just felt right’ when she put her costume on 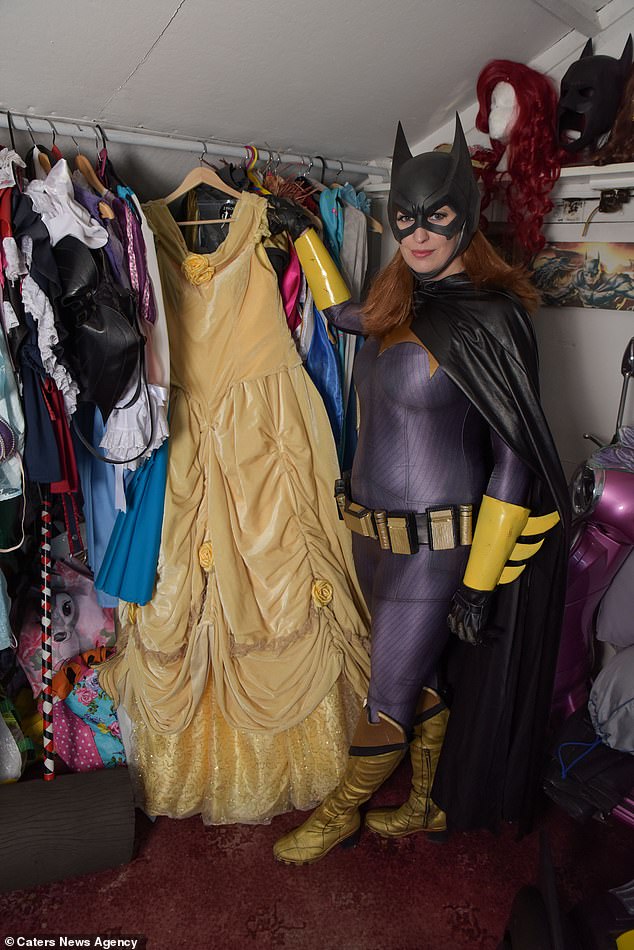 Katie has transformed her garage into a ‘bat cave’ where she painstakingly prepares each costume, including other Cosplay costumes she owns (above)