Before COVID-19 hit Nashville, the tornadoes did.

In the early morning hours of March 3, a pair of twisters ripped through the Tennessee capital at 165 miles an hour. The storm killed some two dozen people and left others homeless, just days before the state’s first case of the coronavirus was identified in a nearby town and less than three weeks before Nashville’s mayor would issue a “safer at home” order.

“When the pandemic was starting, a lot of people were out of their homes who were already pretty vulnerable and marginalized,” said Aimi Hamraie, an associate professor of health, society and American studies at Nashville’s Vanderbilt University.

But they said, “Very quickly people were organizing to help get groceries, to get food to folks who needed it, and really coming together with their neighbors.”

People also chased away real estate developers who, within hours of the storm, had descended to snap up devastated properties, even as the owners still stood on their lawns, surveying the wreckage of their lives. 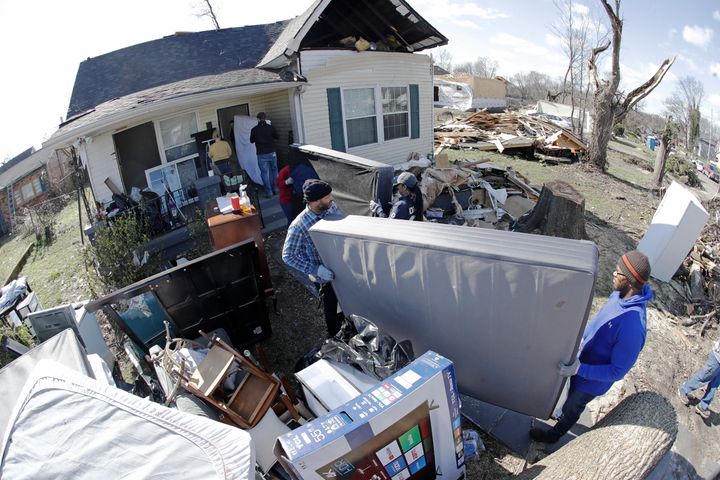 About 20 people from around the city organized themselves into the Nashville Mutual Aid group and circulated a Google spreadsheet to connect people in need with neighbors who could help, offering rides to pick up groceries and prescriptions, child care, and more. There are now nearly 100 people on their listserv.

Hamraie, who is part of the group and whose research focuses on interdependence and collective care, said that members meet weekly via video chat to study the history and philosophy of mutual aid and solidarity movements. These discussions have grown only more topical during the protests sparked by the police killing of George Floyd in Minneapolis on May 25.

“We’ve also talked about the roots of mutual aid and abolition work — efforts to go beyond just relying on the state for health and safety and security and actually create it in our own communities,” they said.

“The term ‘mutual aid’ basically just means when people band together to meet immediate survival needs, usually because of a shared understanding that the systems in place aren’t coming to meet them, or certainly not fast enough,” Dean Spade, an associate professor at Seattle University School of Law and one of the leading voices on mutual aid, explained recently on Democracy Now.

Hyperlocal support networks have proliferated in recent months, evidenced by the scores of mutual aid Google docs, directories of docs, mutual aid 101 instructions and toolkits, Facebook groups, and Slack channels connecting people in need with people who can give. Aid has taken the form of running errands for people who’ve lost income or been homebound during the pandemic. At Black Lives Matter protests, it’s looked like snack stations, safe houses, bail funds and pepper spray relief.

The community outpouring has been inspiring, but it betrays a troubling corollary: that people must find a way to provide for themselves because the nation has failed them. The confluence of the pandemic and the protests is highlighting how chronically under-resourced populations are disproportionately impacted by disasters and police violence. And in these populations, it has always been necessary to fill in the systemic gaps. 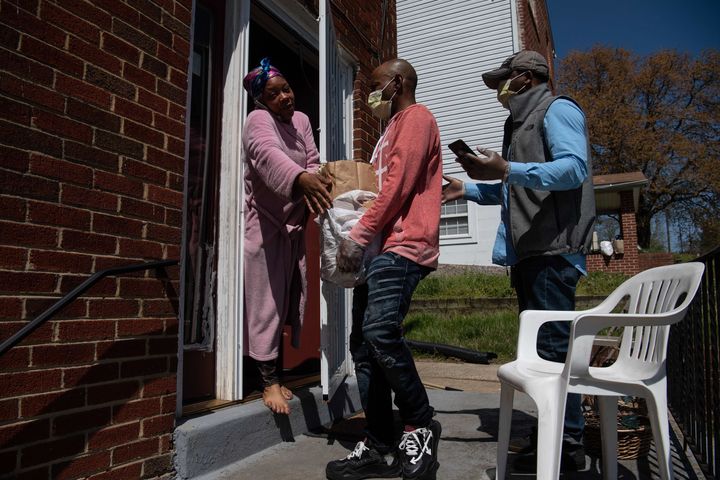 Even before the pandemic, a quarter of Americans were barely getting by, and now soaring unemployment is hitting Hispanic women, immigrants and people without college degrees particularly hard. More than 37 million people in the U.S. already struggled to feed their families — especially Black, Latinx and Indigenous households. The coronavirus has hugely increased levels of need. Food banks have been unable to keep up with the surge in demand and experts fear that the numbers of those experiencing food insecurity will rise by millions because of job losses.

The government’s bumbling and inadequate response to the pandemic — on top of a crumbling health care infrastructure and weak social protections for workers — has created a survivalist need for communities to form their own networks of support.

“Part of the importance of mutual aid is also a critique of neglect of certain communities,” said Paula Austin, assistant professor of history and African American studies at Boston University. “I think that’s why mutual aid is happening now, during the pandemic. Because it’s clear that there are communities that have historically been neglected and we see that neglect brought into relief.”

The tradition of mutual aid is at least as old as the country itself because social inequity is baked into the system. Austin pointed to efforts at the start of the 19th century when the first free Black communities were established in the Northeast. Legal freedom didn’t necessarily translate into social, political and economic equality, she said, “so we get these Black communities that form mutual relief and mutual aid societies.”

Noted abolitionist and local leader William Hamilton co-founded the New York African Society for Mutual Relief in 1808 (though it probably existed in secret before then). The organization collected dues to provide a form of health and life insurance to its members ― prominent Black professionals ― and their families, who otherwise wouldn’t have access to such safety nets.

Throughout the 19th and early 20th centuries, mutual aid societies gave warm clothes and shoes to African American children so they could go to school in the winter, offered child care help to their mothers, and ran literacy classes and job training. Immigrants from Europe and China established networks of communal care, and “sociedades mutualistas” flourished among Latin Americans in the Southwest.

Mutual aid has been and continues to be a crucial lifeline for many marginalized populations, including Indigenous people, people with disabilities and members of the LGBTQ community as well.

In addition to providing for unmet needs, mutual aid societies have been important political organizations, laying out the structural inequalities that left their communities without adequate social services in the first place.

That was central to the mutual aid projects of the Black Panther Party in the 1960s, which included legal aid and children’s education programs, health clinics, and free breakfasts for 20,000 children in 19 cities. “All these programs satisfy the deep needs of the community but they are not solutions to our problems,” wrote Black Panther co-founder Huey Newton. “That is why we call them survival programs, meaning survival pending revolution.” 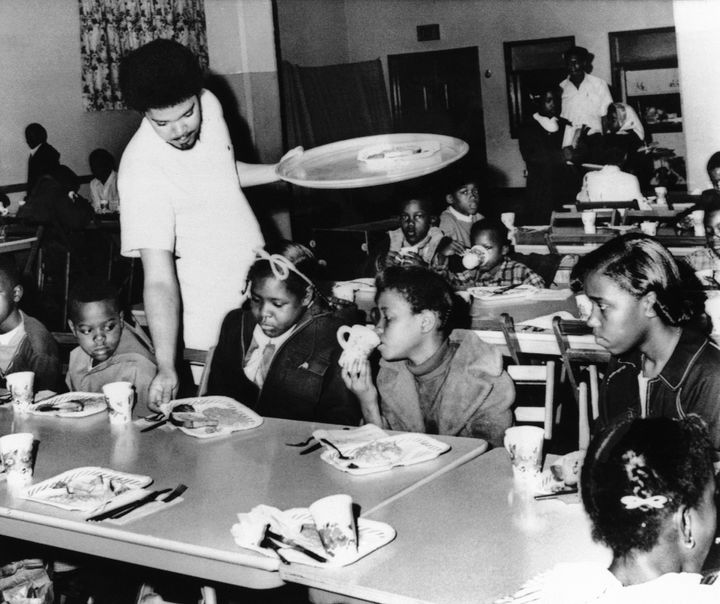 It makes sense that mutual aid swells in times of acute crisis. Grassroots responses, what Hamraie referred to as “the people’s infrastructure,” can react more quickly to specific local needs than a legislative body allocating and distributing funds from afar.

What seems different right now, Hamraie observed, is that many more people “are showing up.” Mutual aid has entered the mainstream in response to both the COVID-19 pandemic and the Black Lives Matter protests.

“Marginalized people have been doing mutual aid forever,” said Hamraie. Now, they said, people from a wide range of backgrounds are stepping up and speaking out who might never before have participated in activism. People are seeing that “you don’t have to solely rely on appeals to your representatives. There are additional ways of creating the world that you want,” Hamraie said.

“We’re seeing a kind of interracial, maybe even cross-class coalition building. And people thinking about, ‘What are my personal resources and how can I use them to support other people, who I may or may not be an actual community with, during the pandemic?’” said Austin.

She traced some of the current interracial organizing against anti-Black police violence back to the Occupy Wall Street protests, when many young, predominantly white people became politicized around issues of systemic economic inequalities.

Alex Gitterman, a professor at the University of Connecticut School of Social Work, said he is reminded of the civil rights movement in the 1960s. “We were always on a picket line, on the protest line, and the climate was right for it,” he recalled. “I haven’t seen that for 60 years. So I’ve got my fingers crossed. It doesn’t last long.”

Gitterman helped develop a model for social work within groups of people that applies the central concepts of mutual aid. The process enables group members to help one another deal with common life and environmental stressors. It ”reduces isolation, de-pathologizes problems and diminishes stigma,” he explained.

He observed that shared experience makes people more likely to come together for a common purpose and impels them to action. But a little heterogeneity in the group, some different perspective, has the potential to create even deeper impact, he said.

People coalescing around a cause that may not affect them directly is an extension ― and an expansion ― of a long tradition of mutual aid. “One way to think about it is the difference between mutual aid for self-determination” — as seen in historically underserved communities creating their own networks of support — “and mutual aid for solidarity,” Hamraie said. 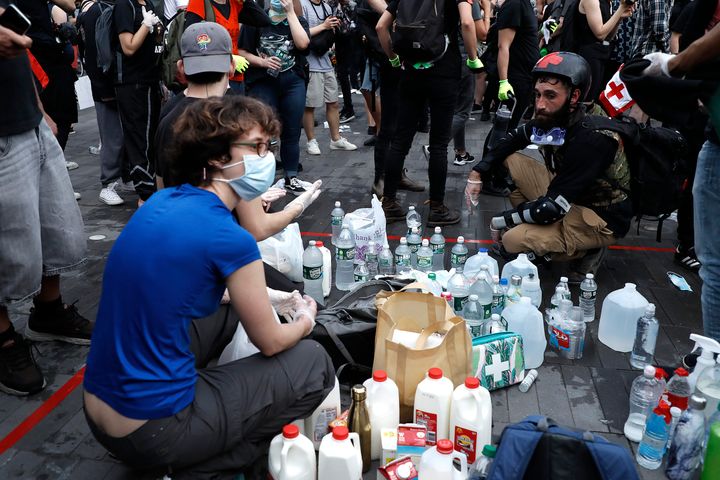 It’s not just about giving, but about joining together. One of the central tenets of mutual aid is “solidarity, not charity.”

How to maintain that distinction when their members have varying levels of privilege and need is something that Hamraie and others in their collective discuss in their weekly chats. And they recognize that even being able to join those calls requires access — to a computer, internet, free time — that not everyone has.

Activists will have to probe these difficult questions as new and expanding networks strive to keep the mutual aid momentum going.

“I believe the generosity and solidarity in action in the present moment offers a foreshadowing of what is possible ― and necessary,” Rebecca Solnit wrote in The Guardian about mutual aid responses to the coronavirus. She went on to say, “Some of that sense of urgency and shared destiny will fade away, as it often does after a disaster, but one of the important things to remember is that some of it was here before this pandemic.”

Whether it’s the 2020s, the 1960s or the 1800s, the dire need for mutual aid exposes the failings of a system that has never provided equally for all people. The question now is whether the groundswell will finally shift the landscape in a meaningful way.

“The revealing of underbelly is always good, but I’m worried that at some point there will be a rolling back from the reveal. I worry that we won’t actually make some necessary fixes,” Austin said. “I’m hopeful and simultaneously worried.”

HuffPost’s “This New World” series is funded by Partners for a New Economy and the Kendeda Fund. All content is editorially independent, with no influence or input from the foundations. If you have an idea or tip for the editorial series, send an email to thisnewworld@huffpost.com.