Just in time for the holiday season, singer-songwriter Ben Rector has wrapped up a new collection of festive tracks, and he gives HL an EXCLUSIVE track-by-track look at ‘A Ben Rector Christmas.’

While traditional Christmas music is often booming and boisterous, with swelling production that matches the immense scope of the season’s jubilation, A Ben Rector’s Christmas takes things down a quieter path. The music, for the most part, is more intimate and heartfelt. The tracks invoke feelings akin to the wonder of a lit-up Christmas tree or the calm on December 25, right before the kids see what Santa’s brought them.

This isn’t to say that A Ben Rector Christmas doesn’t swing. There’s plenty of excitement, especially when he gets to Donny Hathaway’s “This Christmas.” Ben went over his holiday album, track-by-track, with HollywoodLife, so find out why A Charlie Brown Christmas was a huge influence on the record, Ben’s favorite holiday movie, and more. 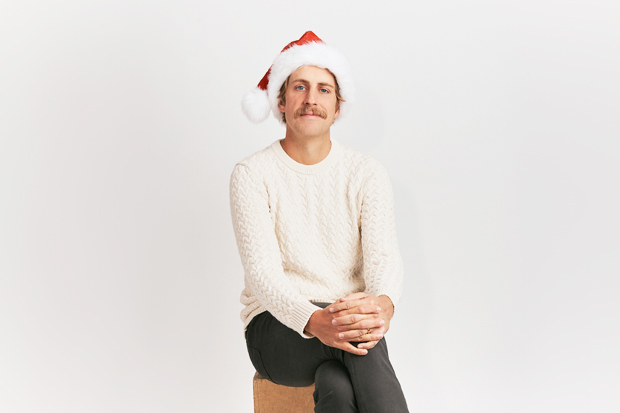 HollywoodLife: You recently revealed on your social media that the lyric video for “The Thanksgiving Song” is full of Easter Eggs regarding your life and career. What inspired you to do that? It seems like it was an early Christmas gift/game for your fans.

Ben Rector: I want to say those were my idea because it was a very clever one, but in reality, the director of that video came up with all of those. People found them quicker than I expected, some of them were really hidden well!

HL: Compared to the Andy Williams original, your take on “It’s The Most Wonderful Time Of The Year” is low-key in a jazzy, ‘mistle-toe over your cocktail glass’ kind of way. In fact, the arrangement on these songs is very succinct – more Charlie Brown Christmas tree and not Griswold light display. What made you decide to perform these songs that way on this album?

Ben: It’s so interesting that you say that because ‘A Charlie Brown Christmas’ was actually the biggest influence sonically and production-wise for the album. I love the way that album accomplishes the feeling of Christmas nostalgia without being big or orchestral, and with Covid, I knew that pulling together a string section or a horn section was unlikely. I also liked the challenge of trying to create a classic sound and emotion without some of the tools people would usually use to do that. I ended having group vocals sung into an old RCA ribbon mic be a character that ran through the album, and Buckley Miller (engineer and mixer) did an excellent job of capturing the instruments in a way that immediately takes you to what feels like a classic place.

HL: First off, do you have a favorite scene or moment in A Charlie Brown Christmas? Secondly, it’s an interesting move to include this on A Ben Rector Christmas. The song doesn’t have the vibrant, boisterous energy that other Christmas music has. It’s more subdued and quieter than most holiday music, and I think you capture that with your version. Why did you pick this song out of all the others available?

Ben: I’m not sure I have a favorite scene, but I do love it. I picked the song because I think it’s one of the most beautiful, melodically, and chordally of any Christmas song (or honestly just songs in general?) that I’ve heard. It feels just like a warm hug to me, just such rich colors and textures.

HL: The American Society of Composers, Authors and Publishers (ASCAP) listed Donny Hathaway’s “This Christmas” as the 30th most-performed holiday song of 2014. Personally, I think that’s a bit too low. Do you remember the first time you heard the original?

Ben: I really haven’t heard a ton of versions of that song outside of the original, honestly, as compared to others on this record. I remember hearing it a long time ago and being so fascinated by how it was simultaneously so funky and also so Christmassy. I tend to think of Christmas music as more, maybe jolly or jazzy, but definitely not funky, and somehow Donny Hathaway made a song that is 100% both of those things.

HL: This and “Jingle Bells” are two of the first Christmas songs everyone seemingly learns as a kid. Your daughter recently turned three years old. Is this her favorite Christmas song?

Currently, Jane is having a hard time wanting to listen to anything other than Dolly Parton, which I totally understand.

HL: When recording this song, did you expect the line “through the years / we all will be together / If the fates allow” would take on a whole different meaning in 2020?

Honestly, a lot of these songs felt more emotional than I expected this year. There’s something about Christmas music that’s reflective, it kind of feels like the last couple lines of the year as a chapter, so singing through these songs for sure brought more emotion than normal years. In good ways, too, though, it really made me grateful for my family and the time I’ve been able to spend with them.

And, as a follow-up, what is the greater significance of A Ben Rector Christmas? Clearly, from listening to how these songs have been arranged, some thought, consideration, and reverence are put into these songs, so it’s not – pardon me for saying – a “jaded, transparent cash-grab,” the stigma that usually haunts Holiday records. You clearly love these songs, and I was wondering if this project has a deeper meaning than a selection of beautiful holiday music?

It really was just a joy to make. There is sometimes pressure and expectation when I’m in the studio because I’m wanting so much to bring the songs to life in the best way I can, and in some ways, I feel like the next chapter of my career is kind of hinging on how well I capture the songs.

With this album, it was just a joy to make music with people I love and to get to work on songs that are so timeless and good. I like to think a good song does a lot of production work for you because it accepts a number of different treatments, so getting to put this album together felt like such a blast because it felt less like walking a balance beam and more like jumping on a trampoline if that makes sense.

There really wasn’t a way for A Ben Rector Christmas to end than with this, right? Did you always know you were going to close out this album with “The Christmas Song?”

Interestingly, it was kind of an afterthought. We finished the other songs and had a little extra time, so Nathan Dugger, Scott Mulvahill, and I ordered dinner, stayed late, and did three takes of the song together, just sort of as a last-minute shot in the dark, and it ended up really being cool!

I presume the cover art for A Ben Rector Christmas was inspired by Bing Crosby’s White Christmas? Are there any other Christmas album art that holds a place under your heart?

The cover is totally an ode to that Bing Crosby album, which is fantastic! I’m not sure I have a specific favorite, but I love the aesthetic of all of them.

Favorite Christmas/holiday movie that you can watch on repeat and never get sick of?

My wife takes me to see It’s A Wonderful Life every year at a small theater in Nashville, and that’s one that I always drag my feet going to and end up crying at the end.