The billionaire family behind Boohoo have kicked off the festive season in style with a very lavish Christmas party for a host of friends and celebrities.

Mahmud Kamani, 52, started out running a Manchester market stall and launched Boohoo in 2006, now worth £2.6 billion, with his son Adam on board, while his son Umar is CEO of PrettyLittleThing.

To celebrate the festive season, the family invited a host of friends and celebrities to kick off party season in Alderley Edge, Cheshire with performances by will.i.am, a soul choir and carnival dancers.

Guests were treated to champagne, Ciroc vodka and a buffet including an array of fresh sushi inside a huge marquee that had been turned into a veritable winter wonderland with fake snow, ornamental reindeer and balloon sculptures.

Gemma Collins was among the glamorous guests while The Real Housewives of Cheshire were also out in force for the festivities with Stacey Forsey, Seema Malhotra and Dawn Ward all putting in an appearance. 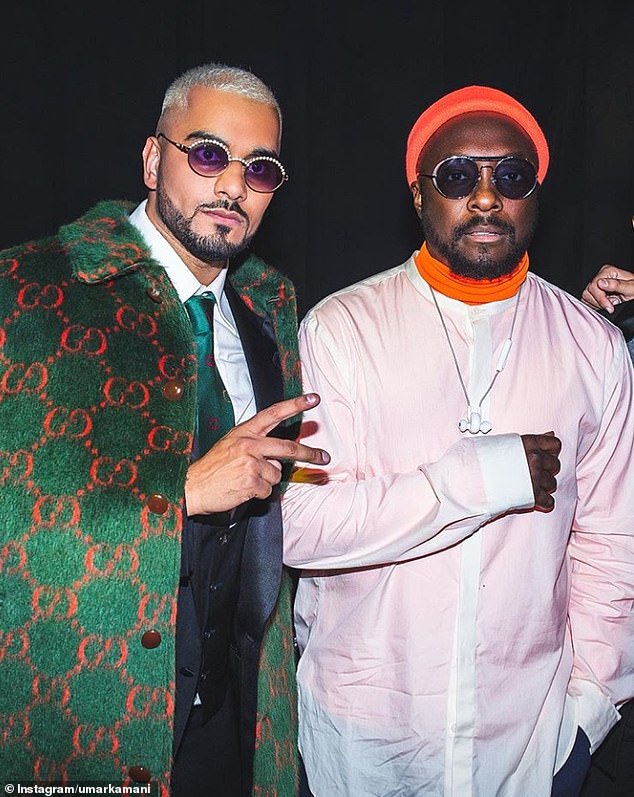 Kicking off the festive season! CEO & Founder PrettyLittleThing Umar Kamani, wearing an opulent monogrammed Gucci coat, with his friend will.i.am who performed at the lavish bash. It was hosted by the billionaire Kamani family in Alderley Edge, Cheshire 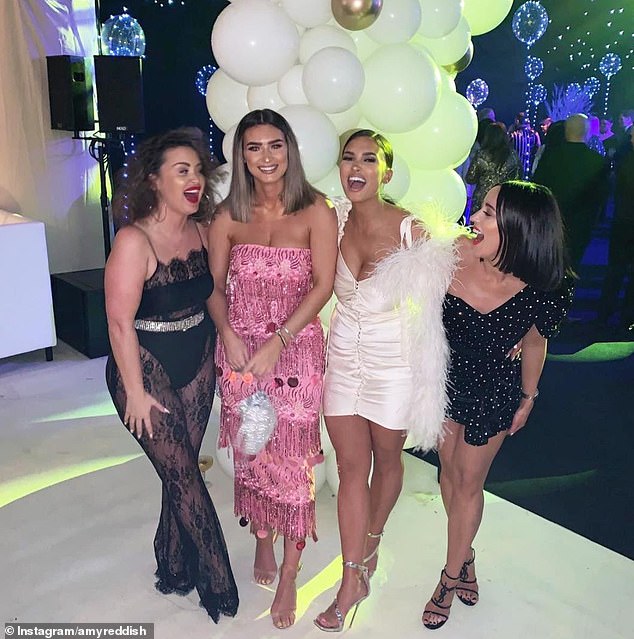 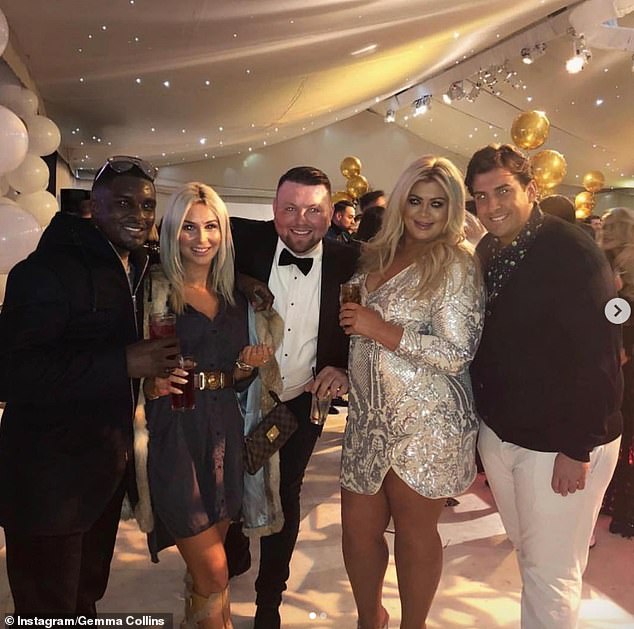 Well that’s one way to start a party #kamanixmas2018 #merlsworld

Well that’s one way to start a party #kamanixmas2018 #merlsworld

The party kicked off with a performance by dancers in elaborately feathered carnival headdresses and sparkling leotards who performed a routine to Mariah Carey’s All I Want For Christmas Is You.

But one of the most glamorous figures of the night was proud mother Aisha Kamani, the wife of Boohoo founder Mahmud.

She later sparkled in purple sequins as she danced on stage alongside will.i.am and the band Soul Devotion. 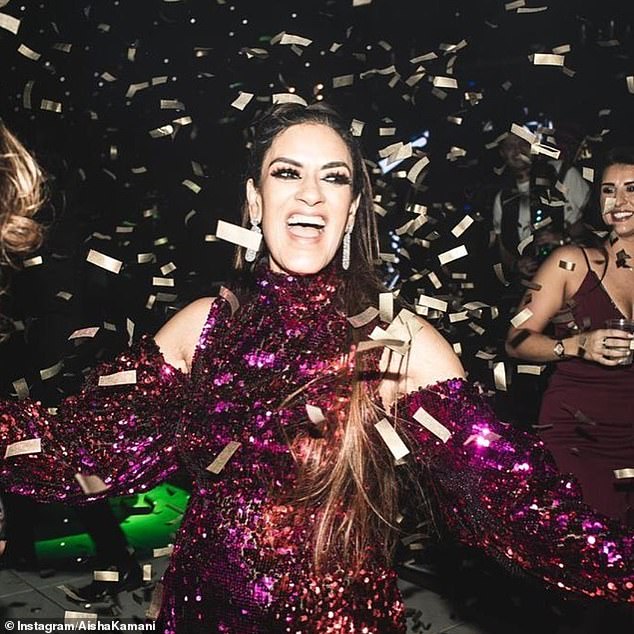 Disco queen: Aisha Kamani, who is married to Boohoo founder Mahmud and is involved with the family businesses, took to the dancefloor as golden confetti rained down 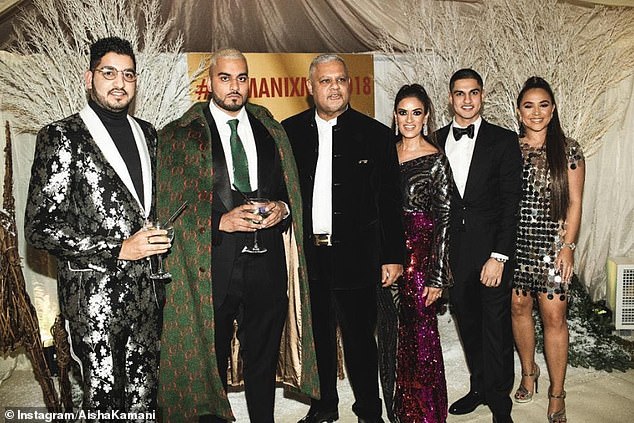 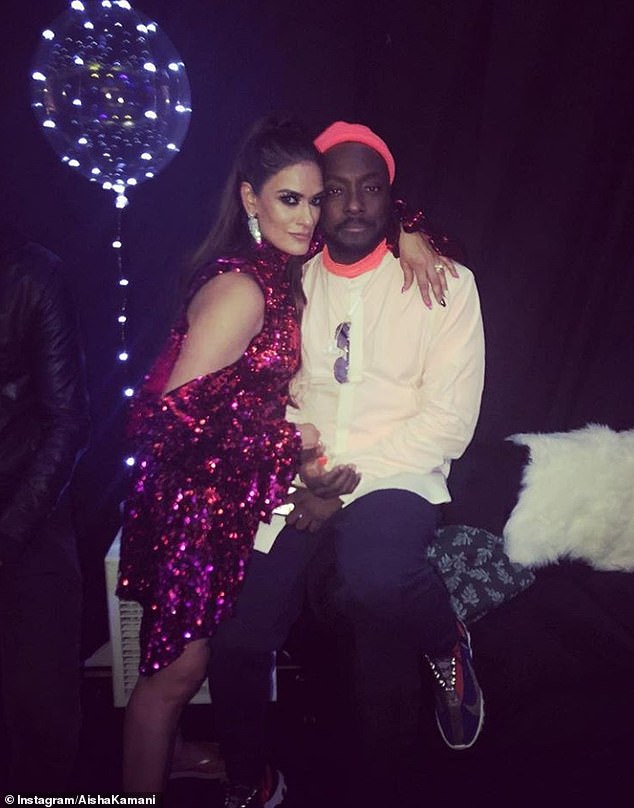 Friends in high places! Aisha looked delighted as she cuddled up to will.i.am who provided entertainment at her family Christmas bash

And in true celebrity fashion, she wore not one but two outfits to the lavish bash, having started the evening in a floor length gown with a zebra print panel and purple sequinned skirt.

It was a real family affair with PrettyLittleThing CEO Umar attending with his girlfriend Amy Reddish, head of brand at the online retailer, who opted for a figure hugging white dress with flirty feather detailing.

He brought along his wife Charlotte, whom he married in a lavish three-day ceremony on Italy’s Lake Como in September last year. 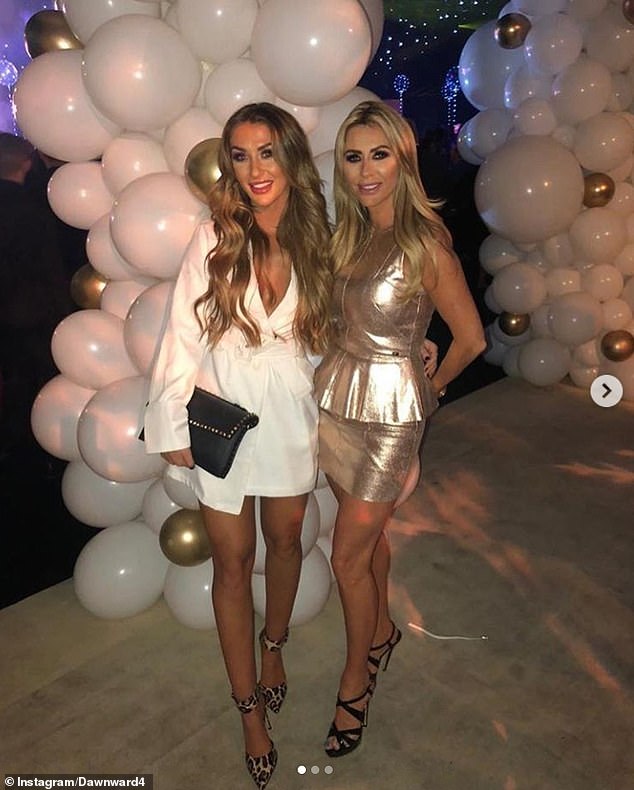 They could be sisters! Real Housewives of Cheshire star Dawn Ward looked glamorous in a metallic peplum mini dress as she posed up a storm with her lookalike daughter Darby 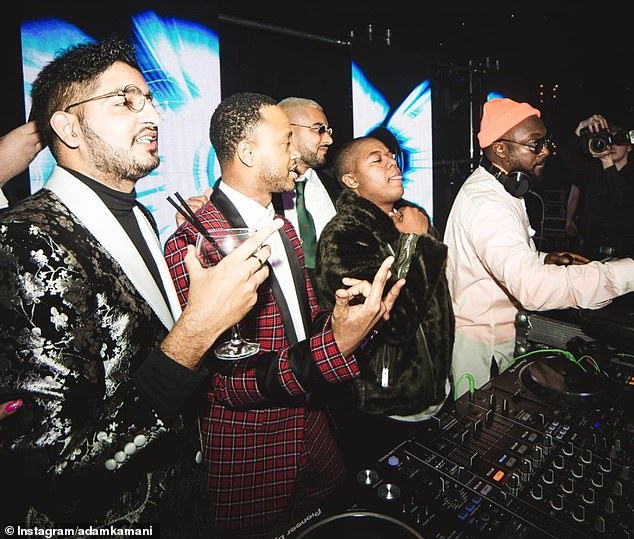 Property developer Adam Kamani, who also works with the family business Boohoo, got into the festive spirit in a silver patterned suit as he partied with pals including will.i.am (right) 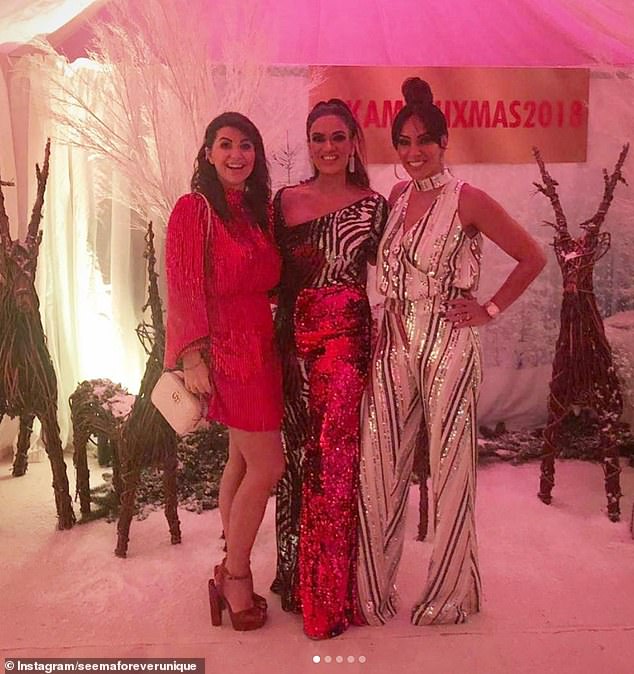 Charlotte glittered in a thigh-skimming sequin frock and matching heels.

Mahmud and Aisha’s third son Samir Kamani, who is involved in the BoohooMAN business, also attended and was dapper in black tie.

The most high profile guest was undoubtedly will.i.am, who is a friend of Umar.

The pair were spotted out on the town together in Manchester in October.

They ordered £500 magnums of Champagne a £1,500 six litre bottle of Belvedere vodka and a £450 bottle of Don Julio tequila to make shot towers during a wild night out at the celebrity haunt Neighbourhood.

The Kamani family has a rags to riches back story, with Indian immigrant Mahmud managing to grow his market stall into a multi-billion pound business. 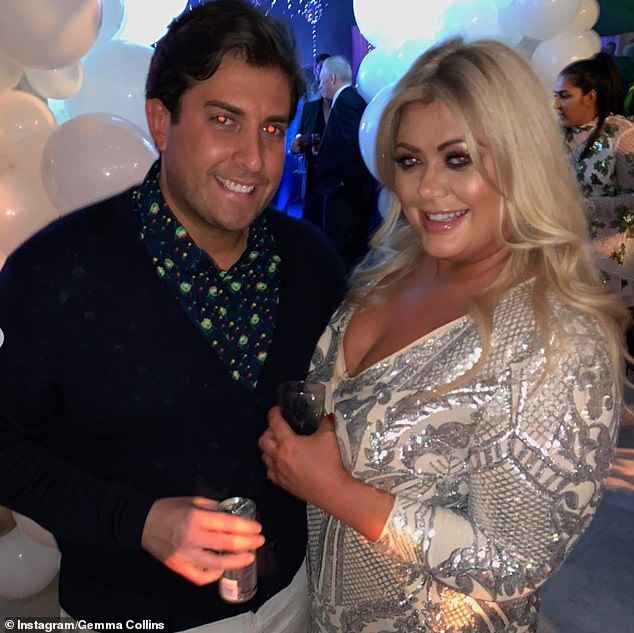 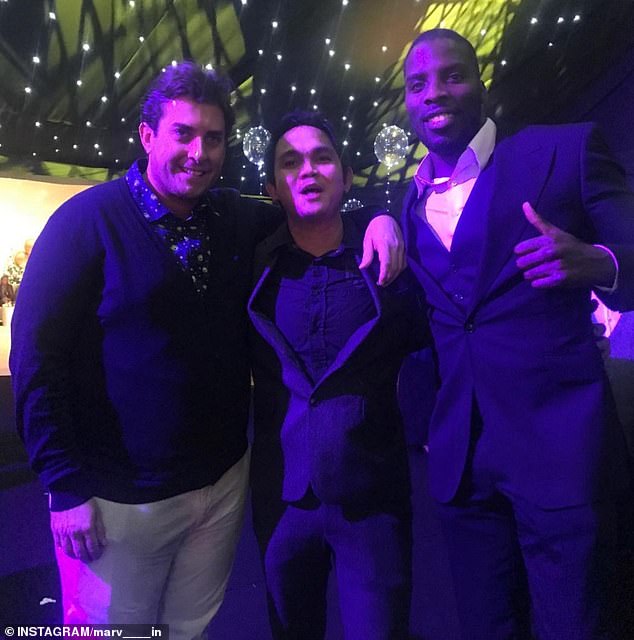 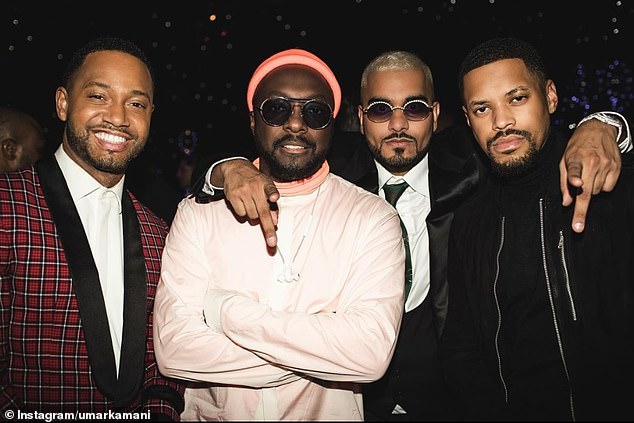 Mahmud’s father Abdullah went to school with Mahatma Gandhi in Gujurat, India. Abdullah moved the family to Kenya, where many Indian families had prospered under the British Empire.

Mahmud was born there in 1964, but four years later the Kamanis were forced to flee to Britain by increasing unrest and draconian employment laws that favoured native Kenyans.

They settled in Manchester, where the entrepreneurial Abdullah sold handbags on a market stall to feed his family, before investing in property and founding the wholesale textile business Pinstripe, where Mahmud worked, using family connections in India to source garments. 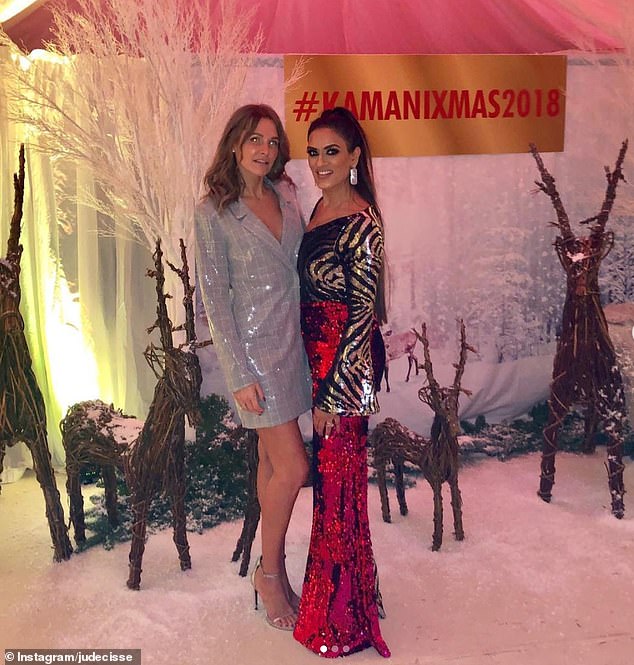 Glitter girls: Former WAG and entrepreneur Jude Cisse, left, with host Aisha Kamani in front of a festive display set up for photos 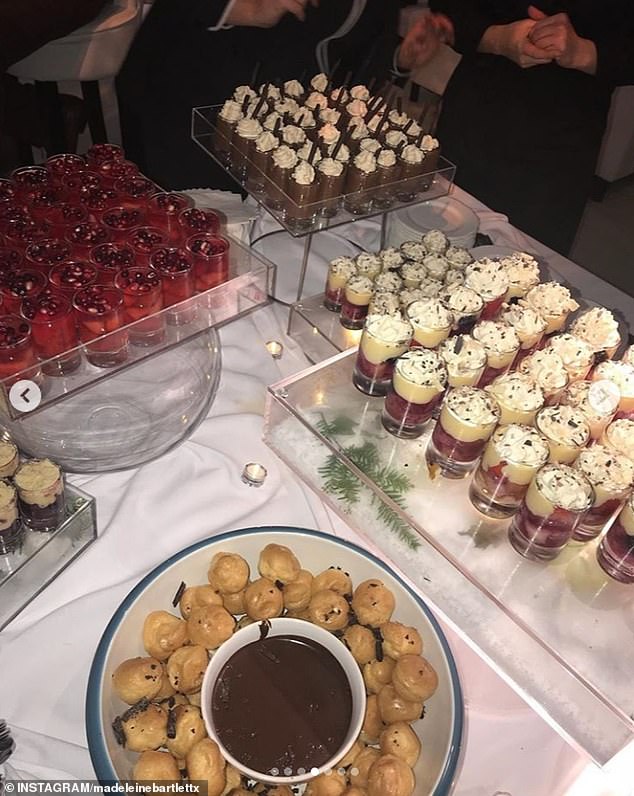 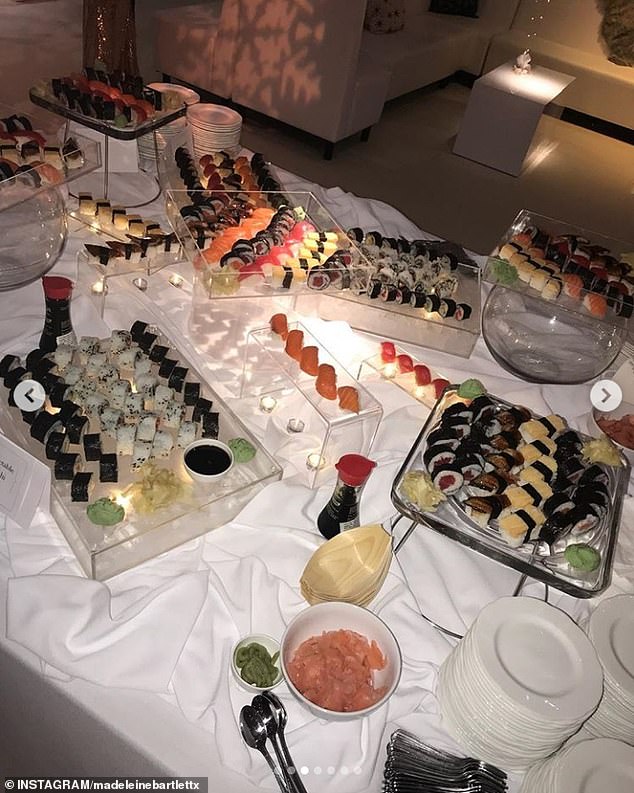 High-end buffet: Sushi was on the menu for guests at the festive bash outside Manchester

By the early 2000s, the firm was selling nearly £50 million of clothing a year to High Street names such as New Look, Primark and Philip Green’s Topshop.

Spotting the potential in the growth of the internet, Mahmud set up his online retailer in 2006 that would deliver their own-branded fashion at rock bottom prices, starting out with just three staff and operating out of a Manchester warehouse.

Today it has a workforce of over 1,000, and celebrity advocates including everyone from Little Mix to Tallia Storm. 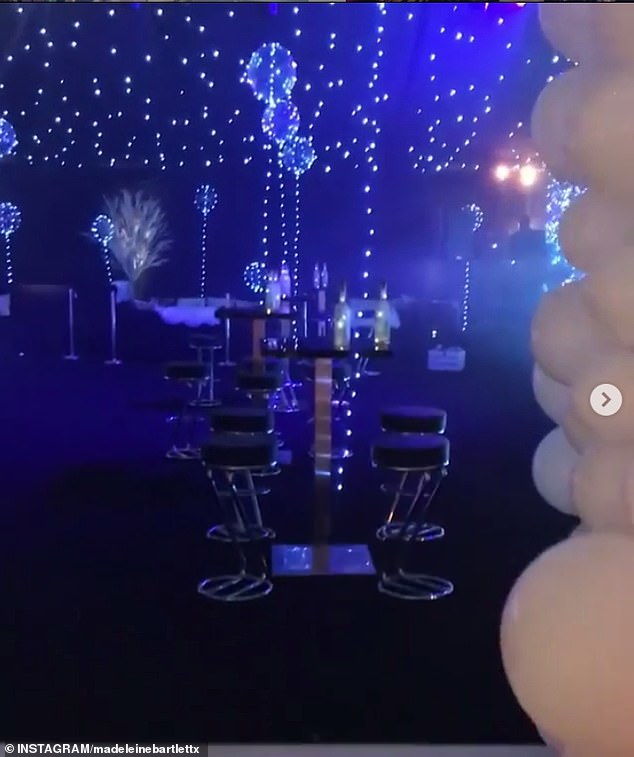 Twinkling: Bar tables set up beneath a marquee hung with fairy lights illuminated at night 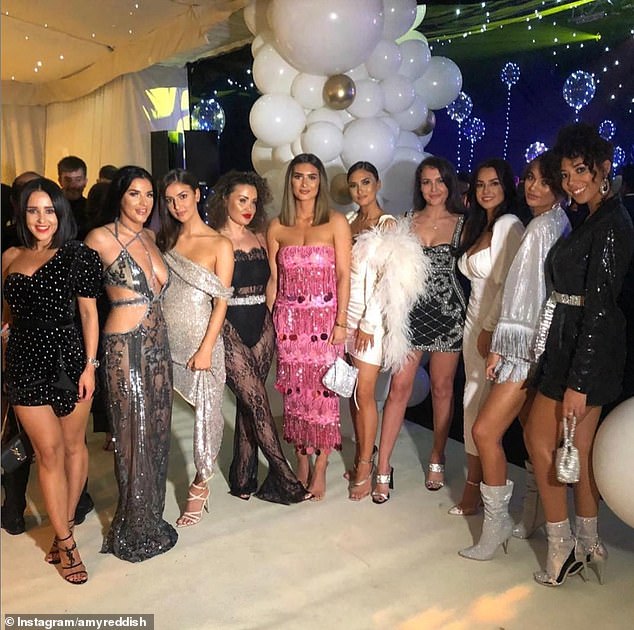 Girl power! Amy Reddish, pictured in white in the centre, is the girlfriend of Umar Kamani and Head of Brand at PrettyLittleThing. She shared this snap of a group of women at the party