A woman has shared her boyfriend’s plans to propose using an old engagement ring that he’d originally bought for his ex — and Redditors aren’t having it.

The young woman, who lives in Singapore, posted about her plight on Reddit last week, explaining that the man she loves had spent a small fortune on the custom ring but never got to use it.

Now that they want to get engaged, he asked if she’s OK with the ring that’s ‘just been sitting in his cupboard’ so it doesn’t go to waste. 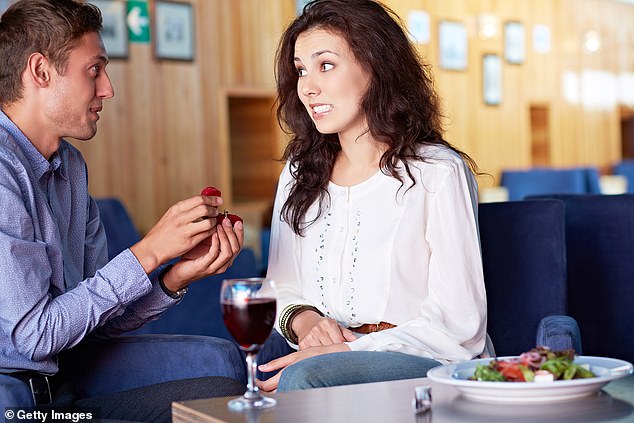 Say it ain’t so! A woman has shared her boyfriend’s plans to propose using an old engagement ring that he’d originally bought for his ex — and Redditors aren’t having it (stock image)

The young woman said she and her boyfriend have been talking about marriage, and she feels sure he’s the right one for her.

‘He is a fantastic guy, really independent, loves his family, also the only guy that really made me feel like I was important,’ she said.

Would you accept an engagement ring made for a boyfriend’s ex?

Would you accept an engagement ring made for a boyfriend’s ex?

But now that they’re getting ready to get engaged and married, he’s asked her if she minds the ring he bought years ago for an ex-girlfriend.

He and the ex had been together for four years, but broke up three years ago. Before the split — ‘the girl had broken his heart again and again and he finally had enough’ — he ordered a custom ring from oversees.

‘I’m not sure what the actual value of the ring was, but according to him he spent few thousand dollars on the ring in total. This was not even including the money spent flying to and fro,’ the poster explained.

The proposal never happened, and now he wants to know if his new girlfriend is okay with ‘the old ring because it’s just been sitting in his cupboard, and he felt like there was finally a purpose to that old ring.’

‘I do see the practicality of it,’ wrote the woman posting. ‘He already has a ring anyway, and it’ll go to waste if he doesn’t use it. We could save the money for the new ring and use it on other more important things like our house instead.

‘However, something in my heart just can’t get over the fact that the ring was originally made for someone else in mind. He assured me that she never wore it, but I just don’t want something that wasn’t made for me.’

She also noted later in the comments that its yellow gold with a colored stone, which is ‘not my style’.

‘Am I being unreasonable?’ she asked. ‘I don’t need an expensive ring, and I don’t need diamonds, but I’d like the ring to be bought with me in mind. Should I just suck it up and accept the old ring?’

Reddit commenters were almost entirely in agreement that no, she should definitely not just ‘suck it up’.

‘No girl! You’re not being unreasonable,’ wrote one. ‘Rings carry stories and history.

‘If it’s not a story you want to carry around on your finger for the rest of your relationship, you are totally within your rights. Also, that ring was customized for another woman, not for you. Get another ring!’

Several others agreed, with one pointing out that it was off that her boyfriend went to so much trouble for his ex but could only muster up ‘an unused ring sitting around in the cupboard’ for her.

‘Would I be cool with wearing a symbol of their failed relationship on my finger for the rest of my life? No,’ she wrote. ‘Would I be annoyed that he put so much effort into his ex and I get her sloppy seconds? Yes.’

‘I like to think of myself as a practical person who is also not superstitious, but HELLLL NOOO to the failed-past-relationship-bad-juju ring!’ wrote another.

‘I can empathize with your boyfriend on the ring being a total financial loss, but there are plenty of other practical and reasonably priced ring options that he could purchase for you with you in mind. Definitely sell the ring and at least get something for it.’

The original poster explained that if her boyfriend sells it, it will be at a major loss, particularly because it was his customizations — not the materials — that made it pricey int he first place.

‘Eh, I understand the practicality of it but I’d still feel funky about accepting ring that wasn’t intended for me. I wasn’t sure if I was being a snob about it so I asked my husband. He said ditch the ring,’ wrote another commenter.

And yet another: ‘I know guy who used a pebble from the beach of their first date to make an engagement ring. That would have more meaning and love than the ExRing. Call it a loss and give the ring to a friend or something.’

‘Sometimes in life you just have to cut your losses and start fresh,’ another agreed. ‘He should sell the ring, be done with it, then get a new one and cop whatever the loss is.’

A few offered other solutions and compromises, like finding a local trade-in spot where he could swap the old ring for a new one.

And quite a few accused the boyfriend of being cheap, leading the girlfriend to rush to his defense.

‘Wouldn’t exactly call him cheap because he’s always been generous is offering help to me and his friends financially, but I guess he was just thinking too practically about this situation,’ she wrote.

‘He’s definitely not a cheap person. He’s always willing to spend money on me when we go on dates,’ she went on.

‘He mentioned that he wants to get me a better ring when we are more financially comfortable. He just really wanted me to have a ring on my finger now.

‘I’d like to think that when he got her the ring he was still young and reckless. Whereas now he’s a lot more mature and thinking about saving for our future rather than spending a huge amount on another ring.

‘Perhaps I need to explain to him that it’s not about the amount that he’s going to be spending, but rather the effort that he’s spending on me?’