Locked down… in paradise: Azure skies, trees groaning with fruit and not a tourist in sight. It may make you sigh with envy, but author CAROL DRINKWATER’s enchanting account of her summer on the Riviera is a glorious paean to pottering

Scorching summer is upon us here on the French Riviera. It has grown too hot to venture into the greenhouse after eight in the morning.

Our land chores are achieved before breakfast, which we sup in the shade of our Magnolia grandiflora. This massive tree is flowering now and exuding one of the headiest perfumes in the world.

In another year, August would be hectic. Barbecues in the garden; lunches in beachside cabanas. Our house guests, laden down with towels, goggles and flippers, would be disappearing off to the seaside while I slog away at my computer in the cool of my library.

Once a week, we would drive 25 minutes over the border into Italy, to the fabulous food market at Ventimiglia to stock up on fresh veggies, salty fish caught overnight in Mediterranean waters and brick-sized chunks of crumbly Parmesan.

Carol Drinkwater who lives in an Olive Farm on the French Riviera with her husband Michel (pictured), shared how they spent lockdown

After shopping, we’d spin along the Italian Corniche to the beautiful town of Bordighera, attractively nicknamed ‘Queen of the Palm Trees’, where we’d settle at a shoreline table to enjoy an al fresco spaghetti al frutti di mare and a chilled glass of prosecco. Perhaps tempted by a coupe of ice cream. Who can resist an Italian gelato?

Alas, not this year. This year, my husband Michel, a documentary film-maker, and I are alone. It has not been the usual whirl of changing sheets, airing rooms before a mad dash to the airport to collect family or treasured pals flying in to spend their summer holidays with us.

It has been a challenging year in many ways for so many of us and we have not ventured far from our Olive Farm since mid-March.

Our confinement — lockdown — came into force on March 17. Overnight, the world went silent. I had been watching the growing concerns over Italy, our neighbours, who were knocked for six by Covid during February, March, into April.

The statistics, those dying from this unexpected virus, were terrifying. The Italians were in lockdown one week before President Emmanuel Macron called for France’s confinement.

Being Italian, of course, they were rarely silent. We watched on YouTube how they sang and played instruments on verandas. They uncorked bottles of prosecco on their balconies and toasted neighbours who in turn toasted them. They celebrated life while all the time the world was keeping a watchful eye on their escalating death toll. Here, on the Continent, that Italian experience was both sobering and uplifting.

Could we handle tragedy with such courage and verve?

During the early days of lockdown, Michel levelled out a belvedere for us behind the house, halfway up our hill, boasting sweeping views to the sea. It has become our evening lookout point from where we watch the sunset. At ten minutes to eight, bottle of wine to hand, we settled, and listened. Echoing across the valleys came the daily applause for health workers. 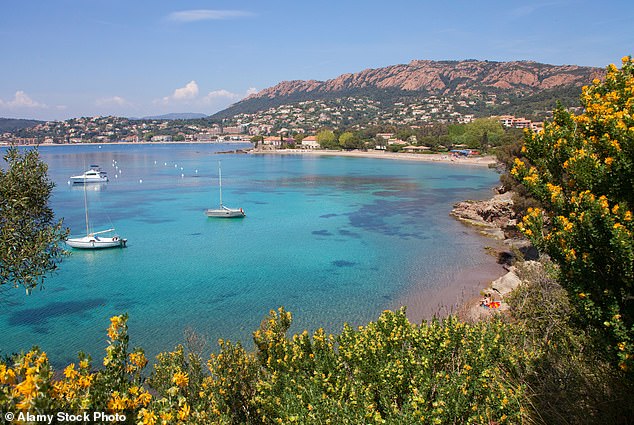 Carol said nature seemed to send a message of hope, as they marvelled at the pine trees and sky during lockdown (file image)

After a few days, the yachts in the old harbour of Cannes joined in, tooting their horns, just as they do during annual firework displays. Reminiscent of happier times.

And then one evening, from somewhere out of sight, a lone saxophonist played us melancholy tunes. Every evening after, his haunting melodies would strike up again.

All about, as the sun was setting, we marvelled at how the trunks of the pine trees turned rusty red, mirroring an incandescent sky. Nature was with us. Everywhere on the planet, a virus was rampaging —but it seemed to me, to us, that nature was sending out a message of hope. A purer world.

With few cars, no planes, no tankers crossing the horizon, there was a drastic reduction in pollution levels. The air was changing and the flora and fauna seemed to be responding. Butterflies, colours everywhere. A glimpse into another way of living?

We set to clearing terraces for the planting of almond trees. The almond grows very contentedly alongside olives. I discovered that while in Israel — both trees require only sparse watering once established. The almond, the first fruit to flower round the Mediterranean, heralds the arrival of spring. It is also an early nectar for the honey bees. In southern Med countries, it blossoms as early as late January. On our side of the wine-dark sea, the pale-pink flowers appear in early to mid-February.

Pink was my mother’s favourite colour. Since her passing four years ago, I have envisaged an almond grove with thick clusters of pink, in celebration of her life and as a gentle reminder, during the darkest winter days, that kinder seasons lie ahead. 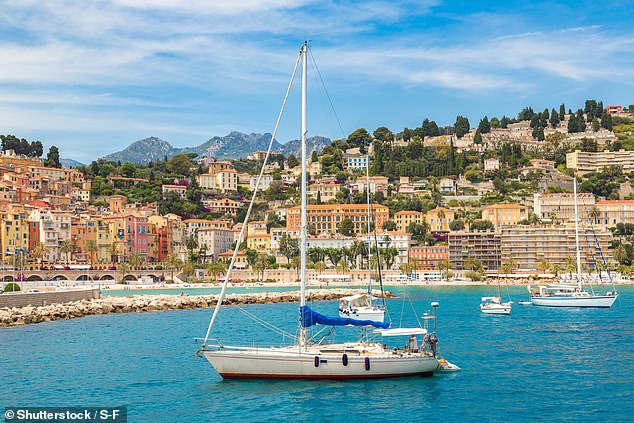 And rarely had there been a darker time than those weeks. Time for planting, for healing.

Our land was ready but where to buy the trees? During normal times, we would have driven into Italy to a favourite nursery. But the border was closed; the garden centres too.

An internet search revealed that a Riviera nursery was delivering but under the strictest of conditions. They had plentiful stocks of cherry, almonds, oranges, limes and lemons. I put in an order, paid by telephone and the saplings began to appear as if by magic just inside our gate, which we left open after our early morning watering sessions.

Planting began. Now our lockdown days had new purpose, even while the world was changing.

Stillness was our new companion. The sky, with no flights in and out of Nice, was bluer than I have ever seen it. Deep hyacinth, shiny as enamel. The birds had grown boisterous in their chorus with barely a passing car to compete with them.

The changes to the environment were becoming more evident. The weather was glorious. We carried our new trees up the hillside and dug them into the earth. It took longer than anticipated. Two weeks became three, and the confinement was extended. Michel was fired by the work. He began another dream: to seed a forest; oaks from acorns. 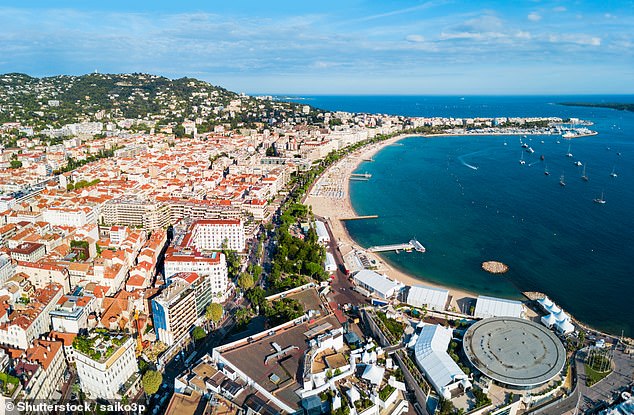 Carol who has had all professional commitments for the year cancelled, said they now have all the time in the world to use their greenhouse (file image)

Over the past two winters, we have lost many pine trees to freak tempests. Tempests of such force that 22 of our mighty pines were felled in the winds. The roots of the maritime pine are shallow. If these weather patterns are to continue, it is wiser to replace them with deep-root species. So began Michel’s oak tree project.

Several years ago we built a vast greenhouse, which we have not really put to good use. ‘Too busy’. ‘No time’. Our perennial excuses.

Now we had time. All the time in the world. Endless days of silence and no travelling. All professional commitments for the year cancelled.

In the spring sunshine, while eagles on the lookout for nesting sites wheeled overhead, I rummaged among scented grasses, wild garlic, hunting for fallen acorns or, even better, mini oak shoots.

These I carefully lifted out of the earth. From miniature green rugby-like balls, roots and shoots grew. Quite remarkable.

Michel potted my daily troves in the greenhouse. Soon, we had more than 100 baby oaks. Alas, they haven’t all survived. Sometimes, the roots are accidentally severed and don’t recover.

Each morning, after dog feeding, the watering commences. Small trees, teeny oaks. We are cultivating orchards we will not live to harvest. As with our young olives — they’re unlikely to begin fruiting till around the age of 15 — we are creating fruit, a landscape, for future generations. I am happy with that concept, especially now when the earth feels damaged and in need of any help we can offer. 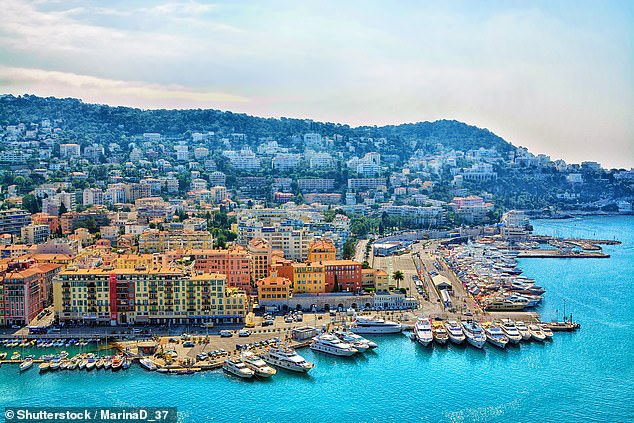 For relaxation, we began discovery jaunts. At first, short distances in compliance with the law. Always staying clear of crowds.

Our farm is a 15-minute walk to Pablo Picasso’s last home. Alongside it stands the lovely Notre-Dame-de-Vie Chapel with its 13th-century bell tower, which was visible to Pablo from his atelier.

Three weeks ago, there was not a soul there besides us. Until a few weeks ago, the beaches along the coast had remained closed to community and tourists alike. Restaurants, museums and cinemas kept their doors firmly shut.

The national deconfinement, which began in mid-May, was gradual. It took place step by well-ordered step. Decisions to unlock were made according to the region and their reported Covid cases. Recently, due to the influx of holidaymakers, national and international, the wearing of masks is obligatory in public places both indoors and out. I agree it is uncomfortable in the escalating heat, but it is essential.

Now is the time that many locals slip off to their maisons in the Mercantour National Park, high in the lower Alps (which is where my next novel is set). Converted shepherd huts or village houses nestling at altitudes where cool air and tranquillity reign alongside thousands of perfumed wildflowers indigenous to these vertiginous slopes.

Hiking, wild-animal spotting. The rare bearded vulture, graceful chamois, the stately Alpine ibex. This park is a natural, red-rocked wonderland. Up here, where Covid-19 seems a figment of a sci-fi writer’s imagination, there are freshwater lakes, river pools, prehistoric cave art. Little has changed in millennia.

Last week, while trekking one of the high-altitude paths that wind their way into Italy, I paused to take in the magnificence of this ancient landscape. It occurred to me then that nature is surviving. Thriving, even. Mainly, dare I say it, where Man keeps his distance.

Yes, summer is full-on now: intoxicating perfumes, fruits maturing, our dogs crashed out in any slab of shade they can curl themselves into.

During the lockdown, we lost one of our three. Homer was a German Shepherd born on this farm on a New Year’s Eve 15 years ago. He had a good life and, like all his canine pals, his resting place is in the apple orchard planted in memory of my father. I stroll over after daybreak to pay my respects.

The branches are sinking beneath the weight of hard, green apples. Our apricot crop, just finishing, is the most generous we have known. Close to 500kg.

Alas, they last such a short time. I leave a few bags on neighbours’ gates, serve them for breakfast. And we have stockpiled dozens of pots of apricot jam.

The skies are no longer as crystal as they were in the spring, during those exceptional lockdown weeks. The planes are flying again. We catch the distant buzz of traffic zipping along the autoroute towards Italy. The tourists have arrived. Slowly, life is returning to ‘normal’.

Normal? I have spent my life haring back and forth. Here and there. How much of it has really been essential?

I like to hope I have glimpsed another way to live and can start to consider a new ‘normality’.