Is Wozzeck, the eponymous soldier-protagonist in Alban Berg's dark opera truly deranged or is he the only one who can perceive the lunacy that surrounds him?

That's just one of many questions the audience is asked to confront in William Kentridge's critically lauded production, which opens tonight. 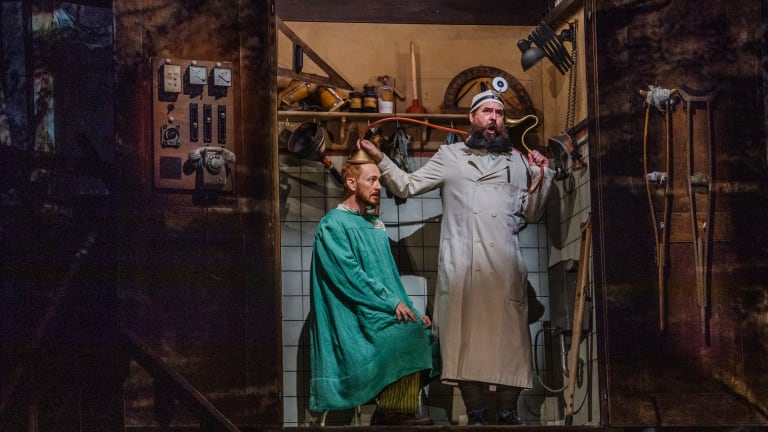 Wozzeck may be the only sane one in this deranged world.Credit:Louise Kennerley

Two of the key creatives responsible for this remarkable setting are Sabine Theunissen (set) and Catherine Meyburgh (projections).

Theunissen's set is a jumbled collection of precipitous walkways and random pieces of furniture, which variously become a lonely forest, a tavern and even a doctor's office – in a wardrobe.

All the while, Meyburgh's projections of Kentridge's trademark disorientating imagery mimic, augment and comment on the stage action.

Both Theunissen and Meyburgh have a long association with the South African artist.

"We are a family," says Meyburgh. "We know each other so intimately. We support each other but we are not scared to criticise each other, which is nice.

"William is a very collaborative artist. He's very open to ideas and strident discussions and criticisms. When you work with someone for that long you have an inherent kind of telepathy."

Theunissen says key to their collaboration is initially being open to all possibilities.

"What is very interesting with William is his openness to not having answers," she says. "He is quite confident in our questions and contradictions. This is key to the work because you find your way better when you don't know exactly where you are going.

"You open doors rather than closing them. If we are all playing the same game we find a way naturally."

And that extends to not giving easy answers to the audience.

"It's about allowing people to apply their own imaginations to the piece," says Meyburgh. "We're not saying this is what we are giving to you. We try not to do that. Does it inspire you? Does it oppress you? Does it make you think differently about the world, take you on a journey?"

New York Times critic Zachary Woolfe said, after seeing Wozzeck, he needed "a walk in the mild evening, some deep breaths and a beer".

Meyburgh and Theunissen laugh at this.

"We're not interested in the light projects," says Meyburgh.