Sandy Powell has just received two Academy Award nominations at once — for the third time. When the costume designer found out on Tuesday morning that she had been double nominated for Best Costume Design (for Mary Poppins Returns and for The Favourite), she was on the set of her next project, which, if things go how they have historically, might just earn her yet another nomination next year.

"I was at work freezing to death on a set in Savannah on a film I’m working on at the moment called The Glorias, which is about Gloria Steinem," Powell explains when we speak, just a few hours after she found out about her 13th and 14th Oscar nominations. "And then I had work phone calls all morning, running around doing things. Then I got a text message from somebody saying, ‘congratulations.’" She adds with a laugh, "And then I got lots of other messages from other people saying congratulations."

Powell has so many recognizable credits to her name that it’s hard to know where to start. She won Oscars for Shakespeare in Love, The Aviator, and The Young Victoria. She’s collaborated with Martin Scorsese six — soon to be seven — times. Four years ago, she looked back to the 1950s for Carol and explored fairytales for Cinderella, and ended up Oscar-nominated for both. She even has an OBE, for crying out loud.

Still, adding two more Academy Award nods to her collection is a big deal. "Oh, it’s surprising," she says of being double-nominated yet again. "You never get complacent about it. It’s always surprising." And nerve-wracking, apparently. "You immediately feel sick, because you go, ‘oh, now I have to think of something to wear, and how I’m going to get there, and the pressure of it all," Powell explains. 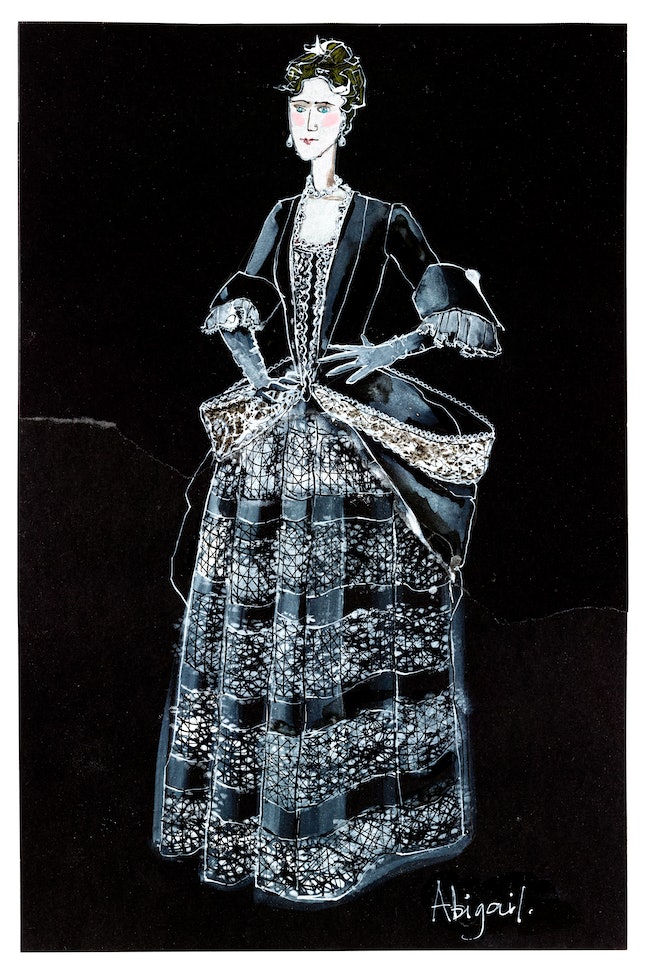 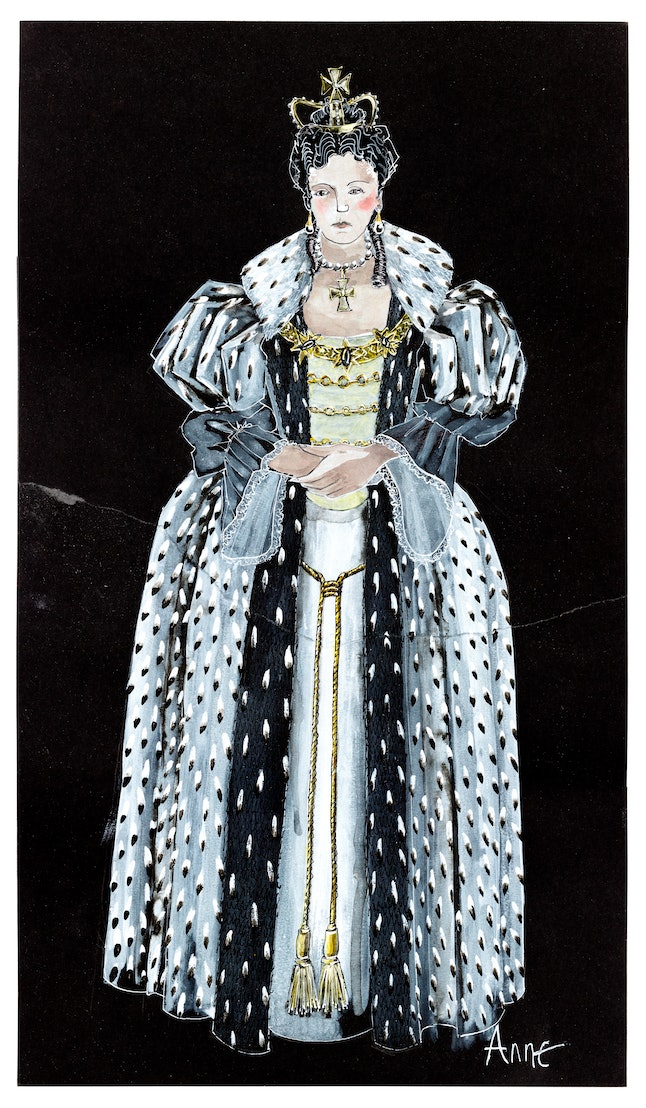 It helps that Mary Poppins Returns (which got four nominations in total) and The Favourite (which earned 10) are two very different films. "I think if I was doing something very similar at the same time, it would have been easy to have got muddled up," says Powell. That said, she won’t refuse a project because it’s too similar to another one she’s working on. "I choose the things I do because I want to do them. Because I like the project. I like the subject matter or I like the director, whatever it is."

Due to her working on them at the same time, the two Oscar-nominated films play off of each other for Powell in a way that audiences would likely never connect. "Mary Poppins is absolutely full of color, and then The Favourite, I kind of stripped out the color and just stuck to monochrome," she explains. "It’s just part of thinking about I need to do something completely different."

Powell describes Mary Poppins Returns as being "about three times the scale, if not more, than The Favourite" with a long prep time that allowed her to work with the actors in rehearsals since the costumes would have to function in motion for dance numbers. For Mary’s look, she paid "homage to the original Mary Poppins, but without it being the same", and says that while the overall costume look is completely different than that of the 1964 movie, "it has the same feeling and it has the same sentiment." 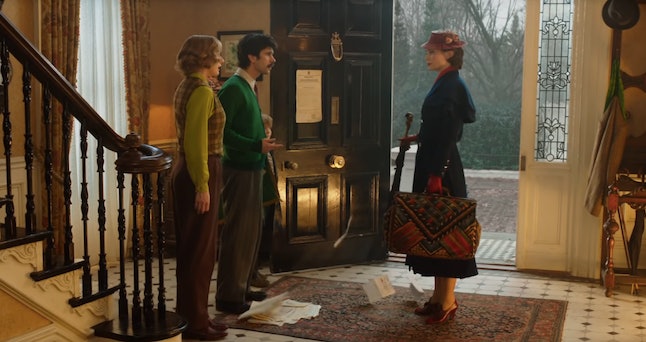 As for The Favourite, Powell started by researching the period and stuck with historically accurate cuts with her designs, "but then took liberties with the choice of fabric and the treatment of the fabric." She explains, "There’s certainly very modern elements. Modern fabrics like denim. Recycled jeans we used to make all the servants’ costumes. And then laser-cut cotton I used instead of lace. Those are very modern elements and fabrics and choices put together, but with the historically accurate silhouette."

This came into play with the memorable costume Rachel Weisz’s character, Lady Sarah, wears in a scene where she shoots a gun. "For me, her character is the strongest," Powell says. "Well, she gives the impression of being the strongest, and the most in control of her feelings, for sure. And I just wanted to show that in her clothes."

Which she did, by using "elements of men’s tailoring, which is not totally inaccurate in terms of what women wore if they were riding or shooting or doing any kind of sport," says the designer, adding, "I just took it a step forward and put her in the britches, and actually dressed her in men’s clothing. But I don’t think she looks very much like a man. She’s wearing the same items of clothing as the men wear, but it looks completely different on a woman." 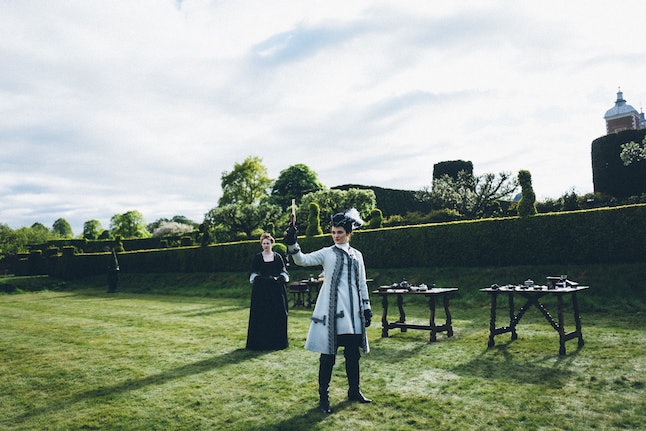 Yet while Powell may be a woman nominated for working on women-centered films, when it came to the amount of women Oscar-nominated across the board this year, many of the categories were seriously lacking. The Best Costume Design category was swept by women, but Best Director, Best Cinematography, Best Original Score, and Best Film Editing feature no women at all. In the writing categories, only two of the 20 total nominees are women.

The designer believes that the number of nominated women will increase eventually, but she notes that the Oscars are only one way of looking at the situation. "Although it’s really great and flattering to be nominated and to be rewarded for what you do, it’s not really what counts. It’s actually your body of work," says Powell. "There are plenty of women out there with really great work. They’re just not getting prizes for it."

If Powell takes home her fourth prize at the Oscars on February 24, she’ll be only the third person to win four Best Costume Design Academy Awards. So if any aspiring women filmmakers are watching from home, they should use her as inspiration in any area of the film industry. Not for her many awards, but for her passion.