A creative foodie has sparked debate online after posting her unique hack for perfect cottage pie – using potato waffles for the topping.

The woman, known as Elaine R, submitted her ingenious creation to the Facebook group Rate My Plate who posted the photo on Friday.

The image shows how Elaine – believed to be from the UK – used five frozen waffles to create a layer of the potato snack as a substitute for the usual mash.

Traditionally, cottage pie consists of beef mince topped with a layer of fluffy mashed potato which is then baked or grilled to create a crust. 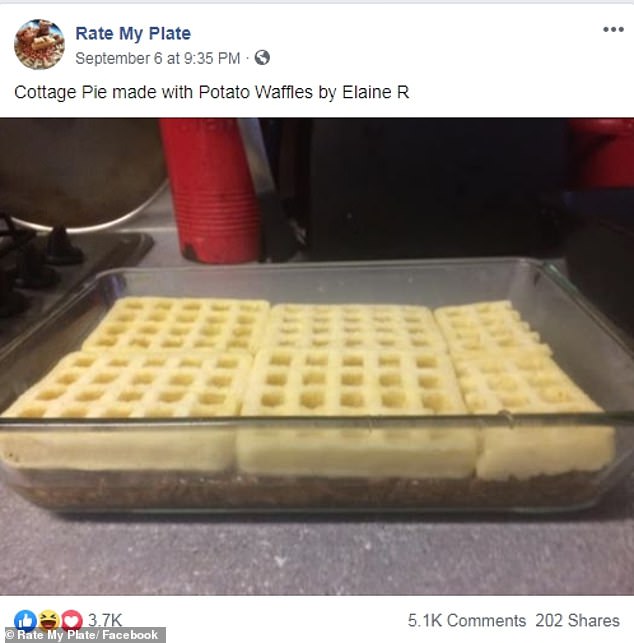 A social media user, known only as Elaine R, has sparked a debate after using potato waffles as a topping for her cottage pie

Elaine’s version, which does without laborious peeling, boiling and mashing of potatoes, has quickly divided fellow social media users.

The photo, which has since clocked up nearly 4,000 likes, was posted with the caption: ‘Cottage pie by Elaine R’.

Many social media users were quick to praise Elaine.

Annalisa Balch replied: ‘I think that’s a fab idea! Needs cheese to sink into the holes and go lovely and goey.’

Moments after innovative dish was posted, more than 5,000 people decided to share their thoughts on the interesting recipe

Helen Corrin added: ‘That’s actually quite a good idea! Crispy topping then, not a fan of mushy stuff.’

And Aaron Daniels commented: ‘This is a genius idea. Saves on making mash and said mash sinking into the sauce. I commend this culinary innovation’

Lisa McKiernan, however, was less impressed. She said: ‘The worst! So very lazy and wrong. You need to make time for cottage pie.

‘It cannot be rushed. It needs a thick layer of buttery cheesy homemade mash at least a coupe of inches thick and some grated cheese on top to melt in. This is pathetic!’

While some slammed the dish, others praised the dish for being a ‘time saving idea’ and a  ‘culinary innovation’ 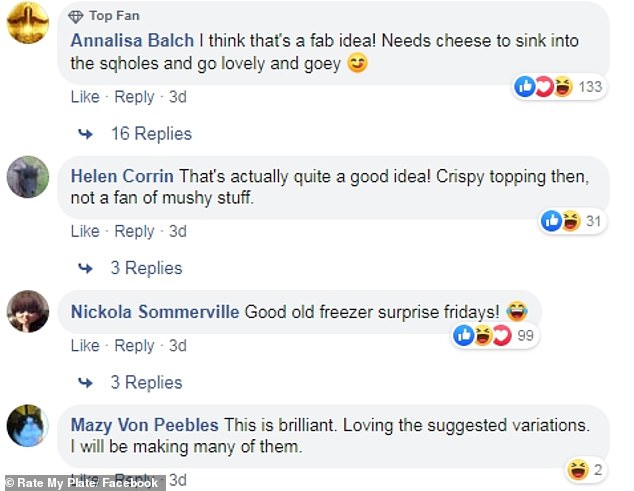 Joanna Oldham concurred, she added: ‘Elaine love that is just mince and waffles. Jesus Christ I hope you’ve done this for s*** and giggles and you’re not seriously serving up this s*** as a staple meal and serving it as a pie!’

And Mick Herr said: ‘That looks like the first five minutes of Grand Designs…. You’ve laid the foundations – Where’s the f****** Cottage?!’

Another outraged user wrote: ‘Not really a cottage pie then is it? It’s just some sloppy meat held in place by a FROZEN supermarket produce. I dare say the meat came from a tin too 0/10 for effort 10/10 for being liberal with the truth.’

While Stephen Webb said: ‘So many levels of sad…well in fact TWO layers of sad!’