Secret surveillance footage taken at Melbourne Cup winning horse trainer Darren Weir’s Warrnambool and Ballarat properties is at the centre of the investigation into the alleged use of illegal shock devices on valuable thoroughbreds.

Weir, who was released without charge after being arrested on Wednesday, was questioned as part of a police probe into betting and animal cruelty that potentially saw electric shock “jiggers” being used to improve the performance of horses. 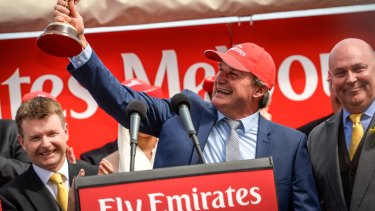 It is understood still pictures were shown to Weir when he was interviewed on Wednesday by detectives from Victoria Police's sporting integrity unit.

While he initially co-operated, he refused to answer questions relating to the images.

It is understood detectives were confident the shock equipment, used to force horses to accelerate due to the sharp pain, were kept at the Weir properties. 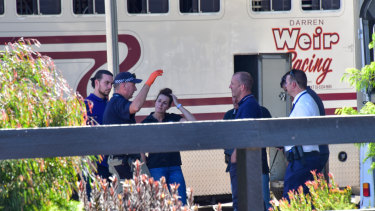 Police are seen at Darren Weir Stables in Miners Rest, Victoria, on Wednesday.Credit:AAP

He was arrested along with 38-year-old stable foreman Jarrod McLean, from Yangery, and a 26-year-old Warrnambool man. All three were questioned and later released without charge.

Meanwhile, Chief Commissioner Graham Ashton has weighed in on the investigation.

Mr Ashton, who owns racehorses, said it was too early to say if criminal charges would be laid or whether the case would be referred to the racing regulatory environment.

"The evidence at this stage is supportive of what we think was going on,” he told radio station 3AW on Thursday morning.

"I think sport integrity and Racing Victoria investigators reached the stage where they needed to execute search warrants to try to capture evidence and then do these interviews.

"We did seize a number of items on those warrants."

On Wednesday morning, police descended on Weir's Ballarat and Warrnambool stables in twin dawn raids, seizing four "jiggers", an unregistered gun and a substance believed to be cocaine.

Mr Ashton, who described himself a racing enthusiast, told 3AW he would never want any of his horses to be trained with the devices. 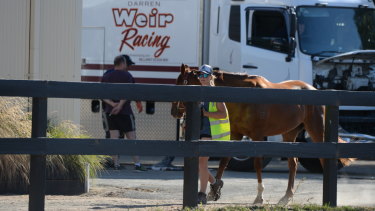 "It's cruel, what it's trying to do is try to encourage a horse – we are not talking specifically about this case – designed to encourage horses when they have certain equipment applied to them, whipped or whatever it might be, an electric charge is going to come their way.

"Overall the industry people are passionate about the animals and welfare and don't want to be put in a position where they are suffering as far as their training methods go," he said.

"I would have thought it's a pretty clean sport."

Weir, who has 11 horses entered for races at Caulfield on Saturday, has told horse owners it is "business as usual" for his stable.

A message from Weir's business manager Mick Leonard informed owners that "our main aim is to ensure our owners are not disadvantaged by this process in any way, and accordingly it is business as usual in relation to the training and care of your horses".

The stable is expected to make a more detailed comment on Thursday.

Racing Victoria chief executive Giles Thompson said there were no grounds on which to stand Weir down, with stewards expected to make a ruling on the matter if more information comes to hand.