Simon and Garfunkel. Lennon and McCartney. Burke and Wills. It seems that all truly great double acts are doomed to crack and splinter under the pressure of fame combined with close proximity. History is littered with the remains of legendary duos who have fallen out and fallen apart. And yet, many years after they first surged into the public eye, Hamish Blake and Andy Lee have yet to meet this fate – especially impressive given that for the past decade they’ve been producing television shows that revolve heavily around the BFFs finding ways to make each other suffer as much as possible.

With yet another of these on the way, one can’t help but wonder if the pair ever get sick of the sight of each other. “Sure! I, I mean no,” replies Blake, an answer that would’ve disappointed fans had he not given it. “If I did get sick of the sight of Andy I’d have to take that photo off my bedroom wall, so he’s safe.” Andy, ever the sober yin, in Monty Burns’ words, to Hamish’s raging yang, replies more thoughtfully. “Most best mates, that’s why they’re best mates: they enjoy hanging out. So it’s not the traditional working relationship some have, where they’re forced to go to overseas conferences or whatever. We’re pretty lucky that way.”

You could say that: travelling the world with your best friend making TV shows doesn’t exactly sound like extreme hardship. In their latest, Hamish and Andy’s “Perfect” Holiday, the lads romp to far-flung places with the conceit that each day, one of them will decide which activity the other one will engage in. The quotation marks in the title are the key to the premise: in effect, Blake and Lee take it in turns to have their own perfect day, which always seems to involve their partner having a far-from-perfect one. 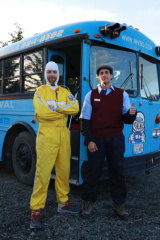 It’s been a while since Hamish and Andy hit the road together. Five years since the last instalment of Hamish and Andy’s Gap Year, and although they’ve barely been apart in the intervening time, with radio, podcasts, and as they tell it, “just hanging out together as mates”, in TV land they’ve each gone solo, Hamish hosting Lego Masters and Andy becoming a vital cog in Shaun Micallef’s resurrected Talkin’ ’Bout Your Generation. As such, one might’ve expected some shifts in the dynamic, perhaps some friction as they tried to once again fit together as on-screen travelling companions.

None of that is evident, though: either on the show or in speaking to them both about it. They’re still acting up like big kids in a sandpit, delighting in each other’s misfortunes almost as much as they clearly revel in each other’s company. Still, everything they do and say is punctuated by frequent peals of raucous laughter: their ability to make each other laugh doesn’t seem to have waned one bit. It’s the ability to stay the same old Hamish and Andy, to avoid ever becoming pompous, polished or showbizzy, that keeps the fans coming back to see whatever ridiculousness they’ve dreamed up for themselves this time.

Asked how fame has changed Andy, Hamish answers, “It hasn’t changed him one little bit, which sounds like a compliment, but he was super-super-arrogant before that. I guess it’s just made it more logical that he has a giant gold statue of himself in his house, but he got it when he was 16.” This entire speech is accompanied by explosive, uncontrollable giggling from Andy, who when asked the same question about Hamish, replies, “He can afford more whims. Back in university, he was eating garlic naan for lunch – just the one slice.” Blake interjects, “Now I have the best garlic naan maker in the world!” “For a guy that loves online purchases,” Andy goes on, “thankfully he can afford them these days.” 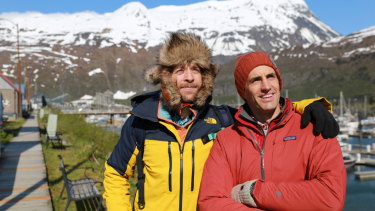 That is Hamish and Andy: you will never for one second see them take each other seriously, which is in an odd way how you know just how serious their friendship is. Only the very best of friends could put the level of trust in each other that the concept of “Perfect” Holiday requires. “It’s a delicate dance,” says Hamish on that subject. “It’s sportsmanship … in a good sport the mechanisms are there for you to give as good as you get. But I think we both enjoy the same sport, which is choosing activities that may make the other person squeal or scream or squirm, but at the end of the day the idea will be respected by the other guy when we’re having a beer.” “It’s like that year 9 camp mentality,” says Andy, “you mightn’t love it when you’re there, but you’ll look back on it fondly.”

How could you not respect ideas like making your best friend drive a bus in a race, or hide from a wolverine in the Alaskan woods? In one particularly poignant sequence in episode one, Lee makes Blake take multiple bites of the world’s hottest chilli, leading to much gasping and choking from Hamish and more squalls of laughter from Andy. It’s a prime example of the pair’s overriding rule for selecting challenges: “If we would laugh together at someone else doing this, the activity is allowed in.”

More than a decade’s evidence suggests that Hamish and Andy’s love of laughing together – at someone else or, more often, at each other – is infectious. They’re reluctant to offer an opinion on just what it is that audiences love about them, but agree it probably has something to do with the joy of watching two best friends seemingly worrying about nothing except having the best possible time together. As long as they keep laughing, we laugh along with them, and as long as they remain the best of friends, we’ll follow them to the ends of the earth and watch them go through any manner of torture for our entertainment. Just like Lennon and McCartney.

WHAT Hamish and Andy's "Perfect" Holiday