Don Bragg, who was denied his dream of playing Tarzan in the movies but parlayed his imposing physique into a gold medal in the pole vault at the 1960 Rome Olympics, died on Saturday at his home in Oakley, Calif., near San Francisco. He was 83.

His wife, Theresa Bragg, confirmed the death. She said he had been in failing health since having a stroke 10 years ago.

Competing in the era of relatively rigid aluminum poles, which required superior upper-body strength, the muscular Bragg, a 6-foot-3 200-pounder, dominated the pole vault in the late 1950s.

Already the holder of world indoor and outdoor records, Bragg vaulted 15 feet 5⅛ inches at the Rome Games — exceeding by almost six inches the Olympic record set by Bob Richards in 1956 — despite having injured a leg muscle a few weeks earlier. Bragg dueled for six and a half hours with his teammate Ron Morris, who won the silver medal, and then climbed the victory stand and let out a Tarzan yell.

Born and raised in New Jersey, Bragg had idolized the ape man famously played for many years in the movies by another Olympian, the swimmer Johnny Weissmuller.

“I went to a lot of Tarzan movies, and I was always trying to emulate him,” Bragg was quoted as saying in “Tales of Gold: An Oral History of the Summer Olympic Games Told by America’s Gold Medal Winners” (1987), by Lewis H. Carlson and John J. Fogarty. “I was always going to the woods, where I had a hideaway called Tarzanville. I’d be out there, swinging through the trees and trying to vault over poles that I’d place between the branches.”

Bragg used bamboo rods he got at a furniture store, where they had been used to wrap carpeting. While attending a track meet in Philadelphia when he was a sophomore at Penns Grove High School in New Jersey, he met Richards, who encouraged him to pursue the sport on a more formal basis.

Bragg was recruited for Villanova University by its renowned coach, Jumbo Elliott. In Bragg’s senior season, during the winter of 1957, he joined with the runners Ron Delany, Charlie Jenkins and Ed Collymore on one of collegiate track and field’s greatest squads.

Elliott occasionally entered Bragg in sprint events to refine his approach to the pole-vault bar. “He didn’t know that much about pole-vaulting, but he did improve my speed,” Bragg said in “Tales of Gold.” Bragg won the National Collegiate Athletic Association’s outdoor championship in 1955 and was the IC4A pole-vault champion, both indoor and outdoor, from 1955 to 1957. 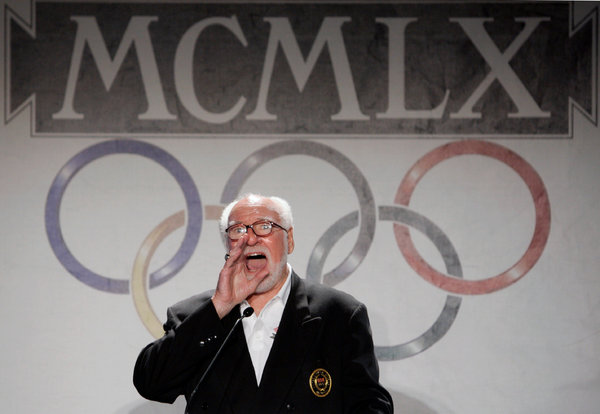 Soon after Bragg retired, flexible fiberglass poles were introduced, rewarding superior technique as well as strength and speed. Those poles, which can bend 90 degrees, act like slingshots, catapulting vaulters to heights far beyond those possible with the poles used by Cornelius Warmerdam, the first vaulter to clear 15 feet, and Bragg.

“If pro track had come along after 1960, I never would have retired,” Bragg once said. “But I couldn’t see learning how to vault all over again with the new poles just to win another medal.”

He broke the world indoor record, set 16 years earlier by Warmerdam, when he vaulted 15 feet 9½ inches on Feb. 13, 1959, at Convention Hall in Philadelphia. That vault eclipsed Warmerdam’s mark by a full inch. He set a world outdoor record by vaulting 15 feet 9¼ inches at the Olympic trials at Stanford Stadium in July 1960.

Bragg carried his poles in canvas cases marked “Don (Tarzan) Bragg,” a flourish that evoked ribbing. “The Californians would always try to psych me out at their home meets,” he remembered. “They’d put a comic-book cover on my locker bearing a likeness of Tarzan and a chimpanzee, and the chimp would be saying, ‘Me Bragg, you Tarzan.’”

He had several chances to play Tarzan in the movies after he retired from the pole vault, but twice lost roles because of injuries and once saw a prospective film fall victim to a copyright-infringement dispute.

Donald George Bragg was born on May 15, 1935, in Penns Grove, N.J., one of four children of George Bragg, who did construction work for DuPont, and Jean (McCoy) Bragg, a homemaker.

Bragg and his wife operated a summer camp for boys in Chatsworth, N.J., in the 1960s and ’70s that concentrated on remedial reading and mathematics. He was the athletic director at Richard Stockton College of New Jersey (now Stockton University) in Pomona in the ’70s and ’80s and invested in real estate. But then came hard times.

After the New Jersey Legislature in 1979 passed the Pinelands Protection Act, which banned development on 1,000 wilderness acres Bragg had purchased, he went bankrupt. He later opened a kayak operation in the Pinelands area.

In addition to his wife, the former Theresa Fiore, Bragg is survived by their sons, Mark and Jeff; their daughters, Tracey Bragg and Renee Bragg; 11 grandchildren; and six great-grandchildren.

Bragg was inducted into the National Track and Field Hall of Fame in 1996, but by then the fiberglass poles had long since made the 15-foot mark — cleared by Bragg 25 times at Villanova — as much a relic as baseball’s dead ball.

As he once put it: “It’s a different event now. The pole does all the work.”