The Reserve Bank has cautioned governments against reducing support for the economy too soon, warning the effects of the coronavirus recession will linger, with unemployment to take some time before falling enough to drive up wages.

RBA deputy governor Guy Debelle, in a speech to the Australian Business Economists (ABE) organisation, said on Tuesday the huge amount of debt taken on by federal and state governments had been pivotal to supporting the economy. 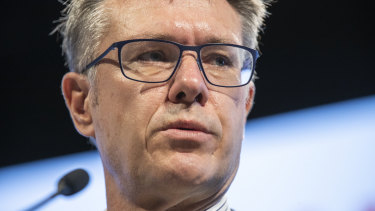 RBA deputy governor Guy Debelle said one of the most important lessons from the global financial crisis was when to reduce support.Credit:Louie Douvis

The RBA has sliced official interest rates to a record low of 0.1 per cent while engaging in a series of quantitative easing measures including the extension of a cheap $200 billion line of credit to the nation's banks. It is also buying government debt to keep downward pressure on the interest rates on official debt.

Dr Debelle, who spoke to the ABE two years ago about the lessons from the global financial crisis, said the response to the coronavirus pandemic had been broader and deeper because of the way the current recession had hit the global economy.

He said one of the most important lessons from the global financial crisis was when to reduce support.

"There was one lesson from the crisis I didn't talk about two years ago that is relevant to today: be careful of removing the stimulus too early," he said. "A number of European countries learned this lesson to their cost after the global financial crisis."

Dr Debelle said there were doubts during the financial crisis about the level of public debt taken on by governments. This time around, with interest rates exceptionally low, governments could borrow to protect the economy.

"In Australia, public debt is very manageable. Public sector debt remains low as a share of GDP for the Australian government as well as the states and territories, even after the sizeable stimulus that is being implemented," he said.

"Australian governments have been able to provide the substantial and very necessary fiscal support to the economy. It is also important to ask: What is the alternative?

"Absent the fiscal support, the Australian economy would be much weaker with the consequent economic and social damage. This would have materially worsened the fiscal position."

Dr Debelle said the RBA's policies had worked in tandem with the spending initiatives of governments, helping to boost cashflow to households and businesses.

Lower interest rates would ultimately encourage firms and consumers to borrow, invest and spend once they were confident about the future.

But Dr Debelle cautioned that it would take some time to fully recover, with the jobs market likely to require ongoing support.

"The fiscal and monetary support will boost spending in the economy. This will increase employment and, in time, reduce unemployment," he said.

"A materially lower unemployment rate is clearly desirable in itself, but will also be necessary before we will see sustainably higher wages growth and inflation."