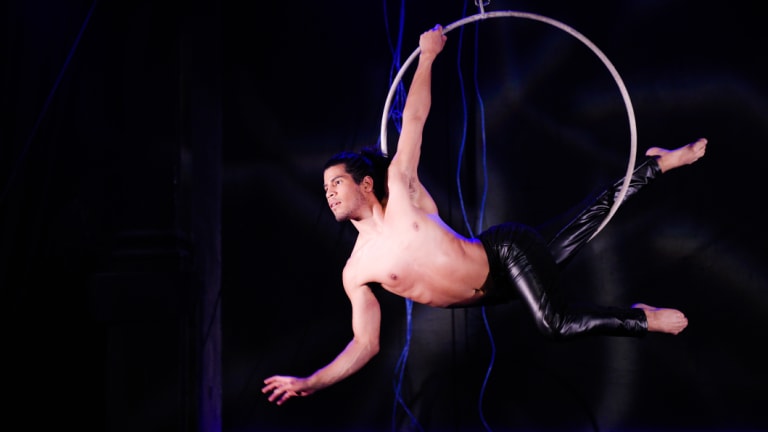 Stephen Sewell isn’t someone you’d immediately expect to write for circus artists, but on reflection it isn’t as left-field as it sounds. Known as a political firebrand, a closer look at his plays reveals a grotesque edge that verges on an abyss of expressionism, and the carnival of fear and desire Sewell engages does lend itself to a dynamic performance style.

It’s why Marion Potts’ 2013 revival of Hate – a production as static as a Baroque opera – failed to gel into a convincing domestic nightmare, and why the 2006 premiere of Sewell’s It Just Stopped – an apocalyptic satire directed with quicksilver instinct by Neil Armfield – still flickers through the mind. 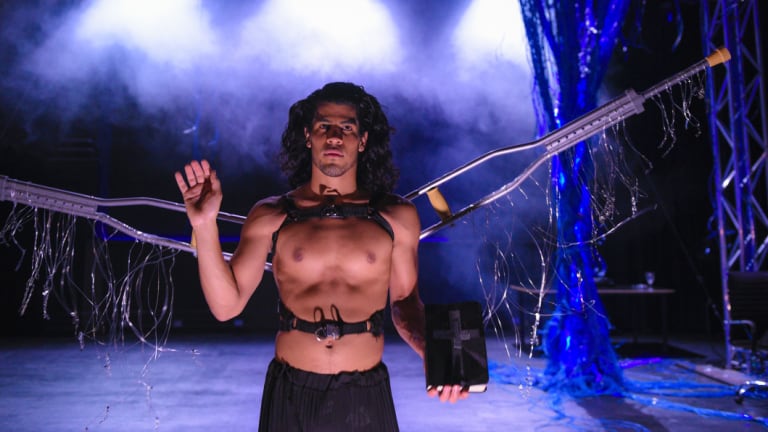 Perpetual Frustration Machine uses the language of movement directly, and with such eloquence that, ironically, there isn’t always enough for Sewell’s words to do.

A dark hybrid of circus, dance-theatre and text.

Oozing between dream-like sequences, the piece seems to bubble up from the modern subconscious into a dark hybrid of circus, dance-theatre and text. Director Zebastian Hunter is left to wrestle an unstable mixture of aesthetic forms into something cogent, and his great strengths as a director are visual and choreographic.

The opening scene explores the emergence of creativity from a mechanical approach to the mind. As a robotic voice calls the performers to change stations, they rotate through shadowy acrobatics improvised around items from a stovetop oven to a red carnation.

But you come to miss the automated voices when the four performers take on Sewell’s drama. While utterly dextrous and expressive in their physical mastery, they’re often clumsy in the realm of language. We might get a staccato, depressive outburst, for example – which only makes theatrical sense as black thoughts flying around internally – delivered at the same speed and intensity you might use to order fish and chips.

The circus has a psychoanalytic undercoat and a darkly polished veneer.

That isn’t to detract from the suggestiveness and intricacy of the physical theatre. The circus has a psychoanalytic undercoat and a darkly polished veneer that flashes between strangeness and familiarity, the bizarre and the banal. It feels almost complete without the words, and at its best is transfigured into a daring, disorienting visual odyssey through the paradoxes and perversities inherent in human desire.