Think you’ve got time to win somebody over? As it turns out, first impressions may be locked in in less than a second.

Researchers at Princeton University found that people decide if another person is trustworthy or not within one tenth of a second of meeting them — and judge things like attractiveness, aggressiveness, and likability pretty quickly, too.

If you want to make the most of a first meeting, body language makes a major difference. To that end, employee engagement and motivation expert Scott Mautz revealed to Inc.com a few of simple tricks that will help you send signals of trustworthiness within the crucial first few seconds. 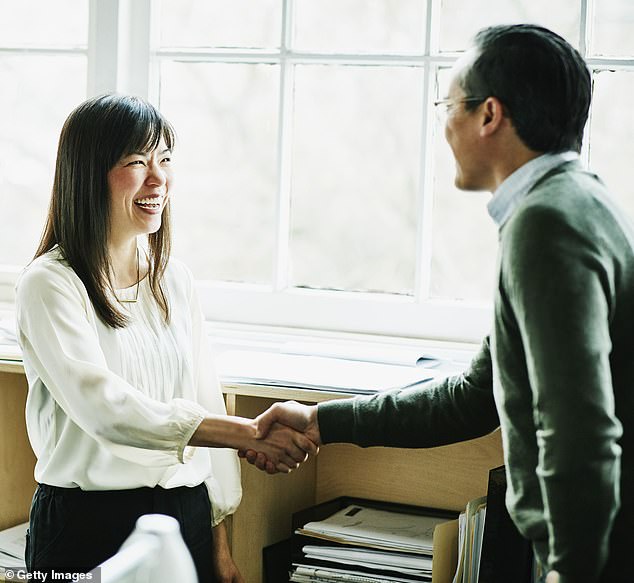 Interesting! An employee engagement expert has revealed six simple things that make a person seem more trustworthy within the first few seconds of meeting them

Simply smiling at someone when you first meet them makes you come across as a more positive person.

This, in turn, makes someone more attracted to you, and ultimately more likely to confide in you.

A ‘genuine smile’ also helps the person you’re meeting to relax and feel more comfortable, according to Mautz.

He added: ‘Also, when you’re smiling, it’s difficult to have a furrowed brow, which can send an unintended signal of a lack of acceptance.’

2. Be aware of hand and head movements

Slightly tilting your head when talking to someone for the first time makes it seem like you are adopting a more vulnerable position than the person you’re speaking to, as well as signifying interest in what they have to say.

Mautz said: ‘The tilted head was a favorite technique used by President Obama when debating an opponent — it engendered less hostility and resistance.’

With hand movements, keeping the palms as visible as possible is important in showing the other person that you have nothing to hide.

‘Pointing at someone sends an overly aggressive signal, as does crossing arms and “burying” the hands,’ he added.

3. Mirror the other person’s body language

‘It’s not about suddenly morphing into someone you’re not,’ Mautz said, adding that mirroring someone else’s gestures is more about paying attention to the other person’s movements and communication techniques.

When you reflect the same body language, ‘they can subconsciously see more of themselves in you, which inherently builds trust,’ he added.

This subconsciously makes the opposite person seem like they are similar to you, and therefore trust is built on this basis.

Showing interest while someone is talking is key to making them feel comfortable to tell you things, and Mautz noted that it makes you see more trustworthy.

Nodding as the person speaks, or bringing your hands to your chin, help to show that you’re interested and listening to what the opposite person has to say.

Using different facial expressions to show empathy for the person is also important in making them believe that you are interested.

Scott says that eye contact is another essential part of conveying trustworthiness.

Those who look directly into the other person’s eyes can come across more believable, whereas those who don’t maintain eye contact can seem ‘more deceptive and less sincere’.

According to Master the Science of Body Language and Maximize Your Success, in Western culture, looking the opposite person in the eye for 70 per cent of the time is a good general guideline to follow.