Doubts over the election promises made by the Coalition and Labor have been raised with new predictions the Australian economy is softening on the back of falling house prices and stagnant wages.

Ahead of a warning from shadow treasurer Chris Bowen that the Coalition's tax cut plans would drive the budget into the red if the economy weakened, forecasts from Deloitte Access Economics point to budget problems that may curtail expensive vote winners. 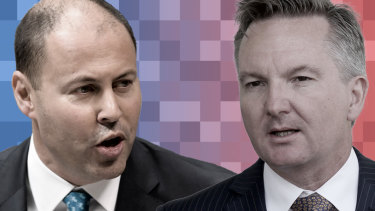 Treasurer Josh Frydenberg and his Labor counterpart Chris Bowen are both facing the problem of a softening Australian economy.Credit:

The Coalition is promising $290 billion in personal income tax cuts between 2022 and 2029 even after it was forced to write down expected revenue by $15 billion in its recent budget.

Labor, opposed to key elements of the Coalition's tax plans, hopes to raise billions from a string of measures including changes to negative gearing, franking credits and capital gains tax.

But both are likely to run into an economy that will fail to grow at its long-term trend rate, Deloitte has warned in its latest outlook.

Deloitte director Chris Richardson said local and global factors were playing into a slowdown that would continue this year and into 2020.

"In addition, that weaker growth will mean slower job gains, and it may also see the recovery in wages – already slower than a wet week – slip sideways for a while."

Opposition Leader Bill Shorten on Sunday again promised Labor would seek to drive up wages, while Treasurer Josh Frydenberg's budget is forecasting a lift in wage growth despite a slowdown in job creation.

"Given that the feds have shovelled some of their good fortune straight back out the door via tax cuts, overall fiscal finances (federal, state and local) now look less flash, with the current improvement set to stall in 2020-21, and then to step backwards in 2022-23 as federal tax cuts take an additional bite from revenues," Mr Richardson said. 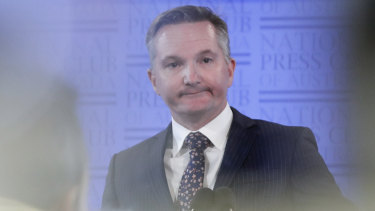 Chris Bowen will warn the Coalition’s planned tax cuts were a major threat to the nation’s finances.Credit:Alex Ellinghausen

Mr Bowen will on Monday use an address to the social services sector to warn the planned tax cuts slated to start in 2022 and 2024 were a major threat to the nation's finances.

"No one knows what the economy will be doing then, I don't, you don't, and Scott Morrison and Josh Frydenberg certainly don't," he will argue.

Parliamentary Budget Office work puts the cost of the tax cuts at a combined $50 billion by 2029.

Mr Bowen will say Labor would provide tax cuts and cost of living relief to low and middle income earners "when it is prudent to do so" but the Coalition would ultimately have to cut spending to pay for its proposals.

"What we will see if the Liberals get their way, is a fiscal crunch befitting the Tea Party where they bake in tax cuts for high income earners into the budget with unspecified spending cuts that will really bite over the next decade," he will say.