The latest episode of Escape to the Chateau – which saw Dick and Angel Strawbridge host a ‘stunning’ wedding’ – has been lauded as an ‘hour of heaven’ by fans of the Channel 4 show.

Now on its fifth series, the programme has followed the ambitious couple as they set about renovating the 45-bedroom Château-de-la-Motte Husson in France, which they bought in 2014 for £280,000.

Having completed the majority of the work on doing up the French castle, which is located in the scenic Loire Valley, the duo have turned their attention to setting up a new glamping business within the sprawling grounds – as well as launching their labour of love chateau as a wedding venue.

And Dick, 58, and Angel, 47, wowed viewers with their creativity and sheer graft, working in stifling summer temperatures to pull off a spectacular ceremony for the lucky couple – and preparing everything from the flowers to the food themselves.

Angel’s decorations for the chateau’s grand staircase – which cost the equivalent of £50,000 in today’s money to make – matched the fresh flowers in the bride’s hand-tied bouquet, and left fans swooning.

One fan called the display ‘to die for’, while another tweeted: ‘Could this programme be any more wonderful? An hour of heaven.’ 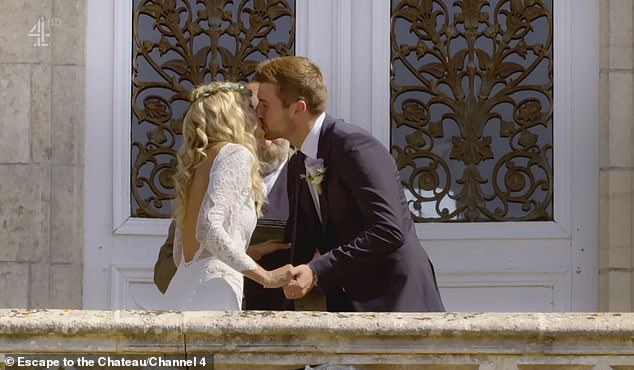 The newlyweds were wed by Dick himself, with Christie walking down the grand staircase out onto the courtyard where their guests were seated before meeting her groom Neil at the altar 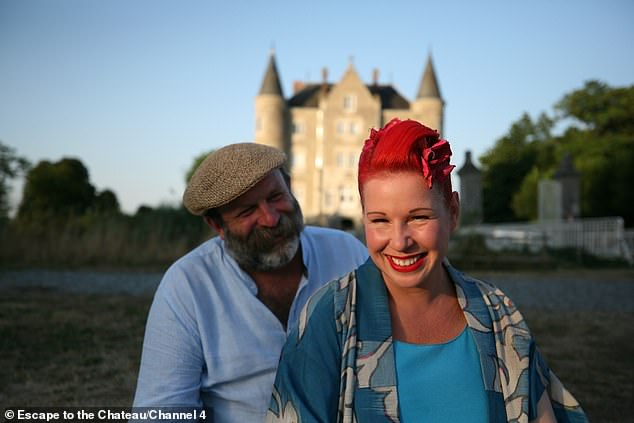 Escape to the Chateau is now on its fifth series, with Channel 4 cameras following the ambitious couple as they have been renovating their 45-bedroom Château-de-la-Motte Husson, which they purchased in 2014 for £280,000 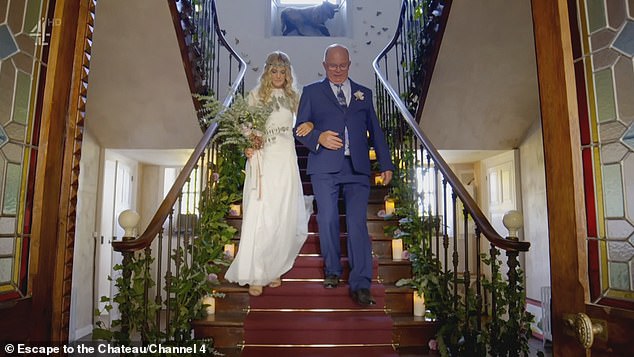 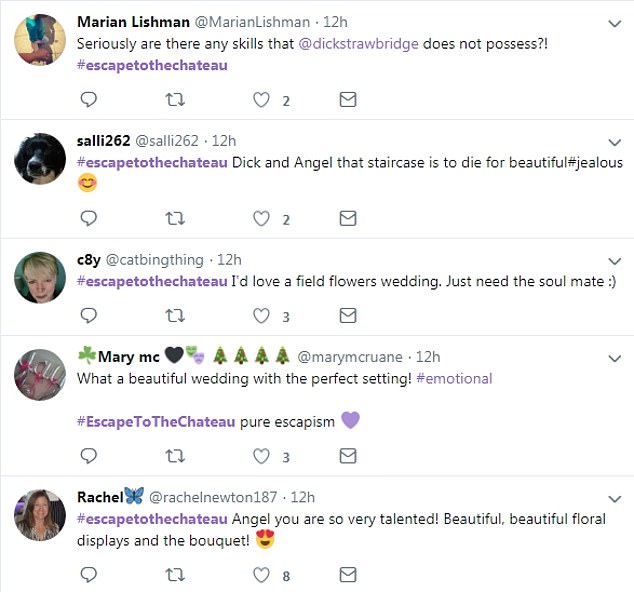 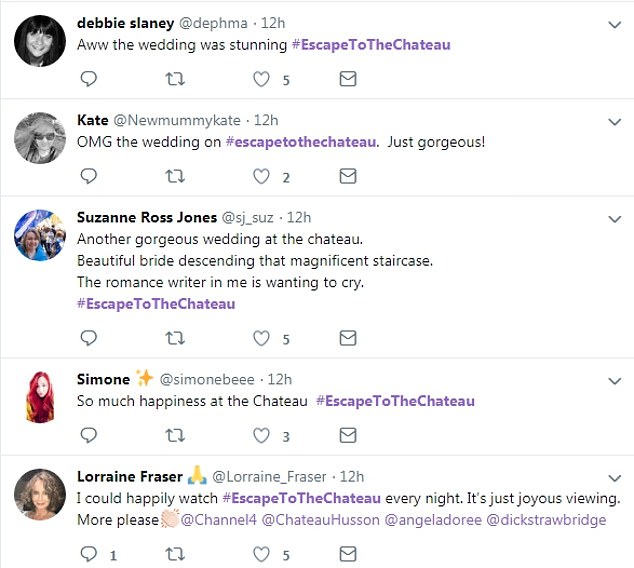 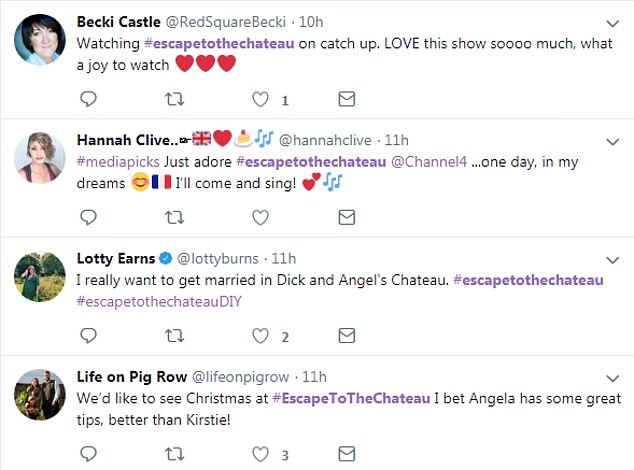 Viewers who tuned into the wedding were in awe of everything Dick and Angel had achieved, with many gushing over incredible the castle looked for the ceremony

‘Is there anything Dick and Angel can’t turn their hand too? Every week i’m in awe! Love it,’ said one viewer.

‘So many lovely things in tonight’s episode. The gorgeous bouquet for the bride, the wonderful staircase with the flowers and new carpet, the tempting food and the amazing wedding dress.

‘Could this prog be any more wonderful? An hour of heaven,’ gushed another.

Others were in awe of the nuptials and what Angel had achieved with the decor: ‘What a beautiful wedding with the perfect setting!’

‘Angel you are so very talented! Beautiful, beautiful floral displays and the bouquet!’ praised one.

Many viewers praised the couple for their achievements asking: ‘Is there anything Dick and Angel can’t do? Amazing talents.’

‘Dick and Angel are national treasures. We need to protect them at all costs,’ joked another. 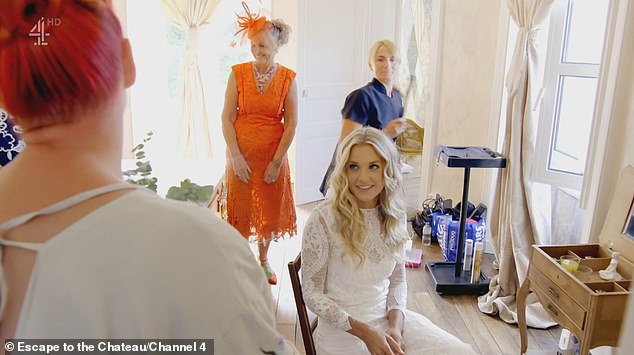 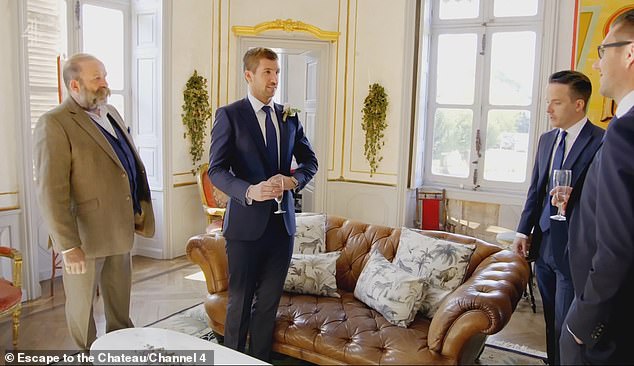 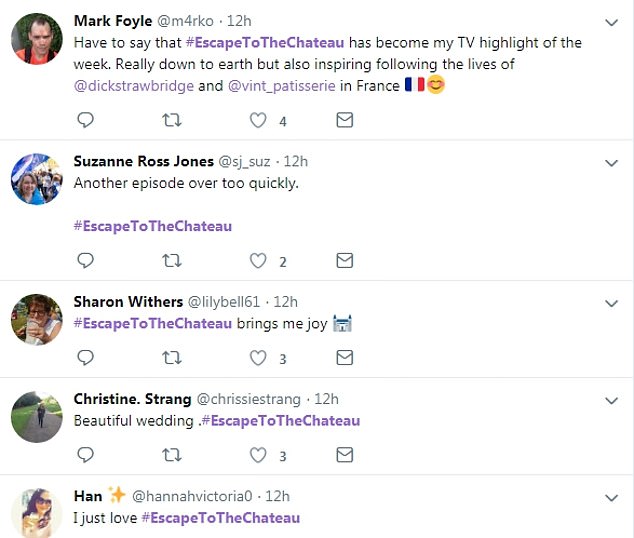 Viewers praised the talents of the couple who pulled off the extravagant wedding in the middle of the summer heat, with many wondering if they could have their own weddings there

Dick and Angel faced a hectic weekend hosting the wedding, taking advantage of the property’s extensive grounds, which feature a moat, a walled garden, a private forest and seven outbuildings for the nuptials.

The bride and groom, Christie and Neil Potter, moved to the west coast of America a year ago so the wedding – which took place over the last weekend in August this year – was not only a celebration of their love but a reunion of their friends of family.

The chateau played host to over 80 wedding guests for a pre-wedding hog roast before the big day, with Dick on hand to cook the pig as they enjoyed the summer sun under the enormous pollard trees in the courtyard.

Angel wanted to make sure everything was perfect for their clients, using her favourite china and vintage crockery which she revealed some of was over 100 years old. 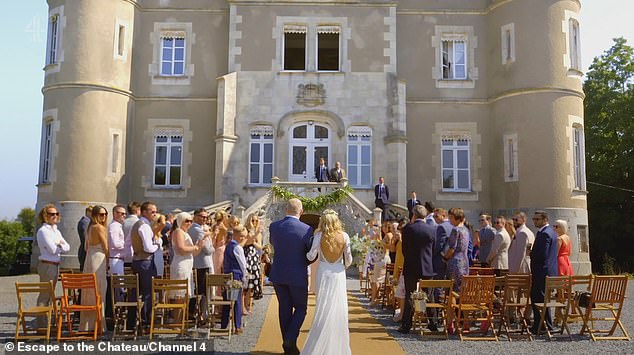 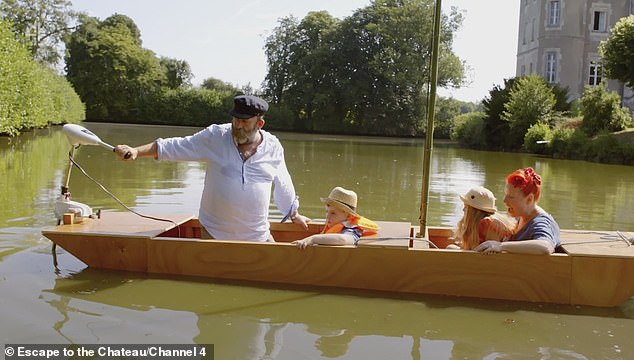 In between the hectic wedding preparations Dick also made time to build a boat for the castle moat, so that his family could enjoy the sunshine on the water

Determined to give the bride a grand entrance, Angel dress the main staircase in an impressive array of fresh flowers that she also handmade a matching personalised bouquet out of for Christie.

Angel had also sourced a burgundy carpet that she had fitted with brass poles to give the staircase, which cost the equivalent of £50,000 to originally make, a regal finish.

Dick ordained the couple in front of their friends and family in the beautiful ceremony, before hopping it back to the kitchen to put together the nine-course wedding banquet which featured a seven-hour slow-cooked beef and 300 canapes.

Faced with near 30-degree heat Dick had to invent an ingenious solution to stop the wedding cakes from melting in the heat, which involved piercing the chateau’s walls and employing a huge air conditioning unit. 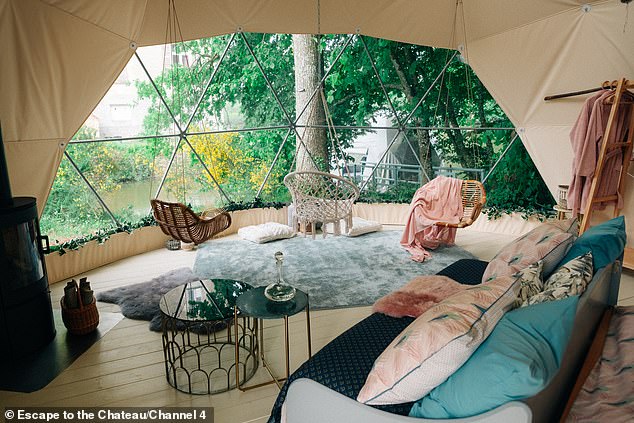 Their latest business venture is ‘glamping’ which includes one dome on land. The luxury interiors include a pretty swing overlooking the chateau’s grounds 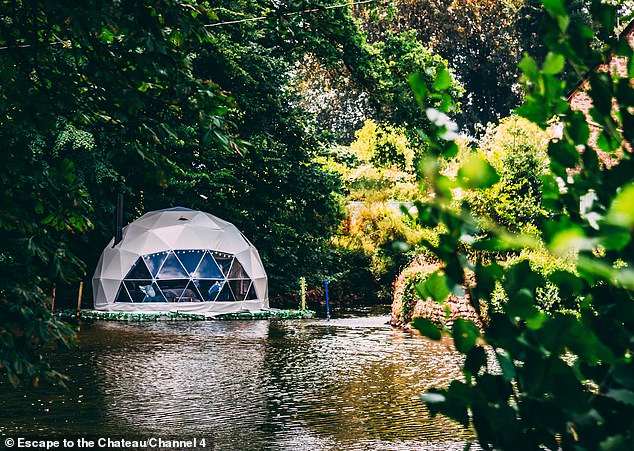 The glamping experience has an outdoor seating area specifically designed for guests. One of the domes floats on the moat surrounding the chateau

The well-prepared couple pulled of the wedding without a single hitch and Dick also found time to build a boat for their two children Arthur, five, and Dorothy, three, so they can play around on the castle’s moat during their school summer holidays.

The new series so far picked up in the spring of this year with the couple’s new glamping business under way.

The floating dome on the moat is for two people and the one on land accommodates four people. They have luxury interiors designed by Angel and even includes a swing.