A stay-at-home father has started an Instagram page dedicated to winding his girlfriend up while she is at work and wants to know how their daughter is.

Kenny Deuss, from Antwerp, Belgium, created the @onadventurewithdad account after his partner regularly asked him to send photos of their one-year-old daughter Alix to make sure she was safe.

Instead of doing as his girlfriend asked, Kenny set up the page as a joke, with prank pictures pretending to show their daughter in silly and ‘dangerous’ situations. 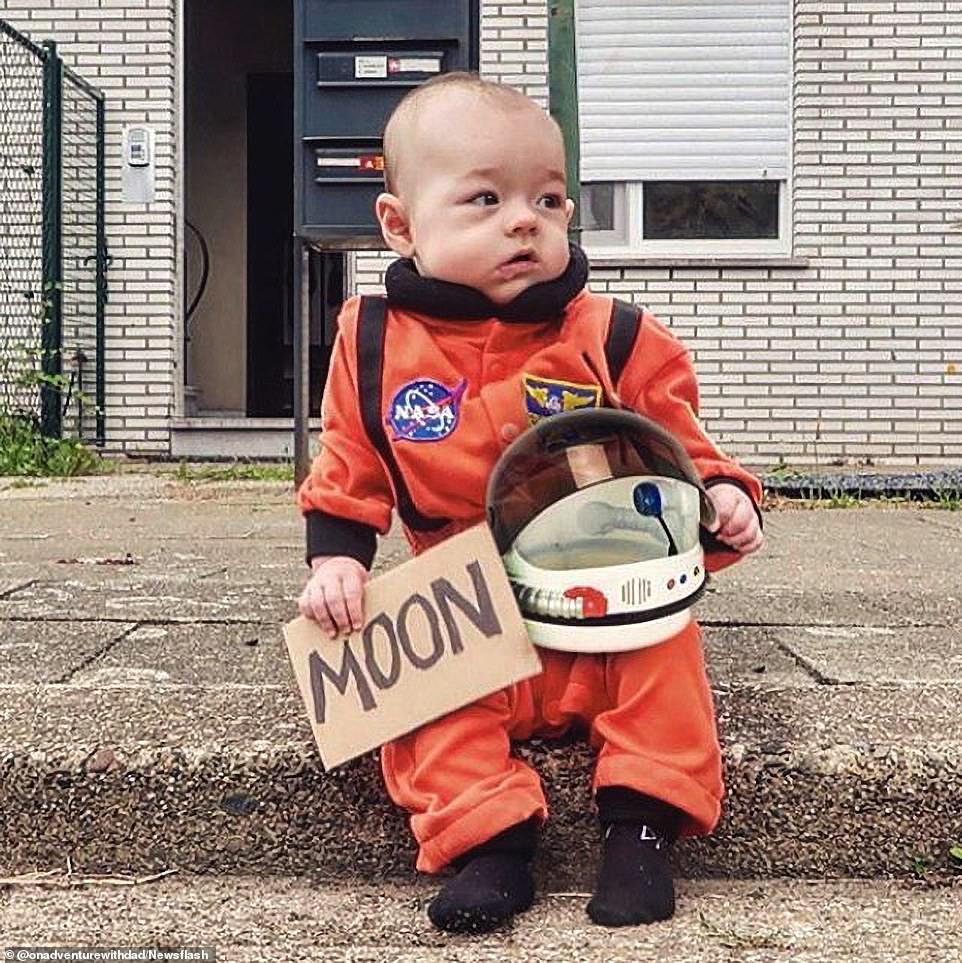 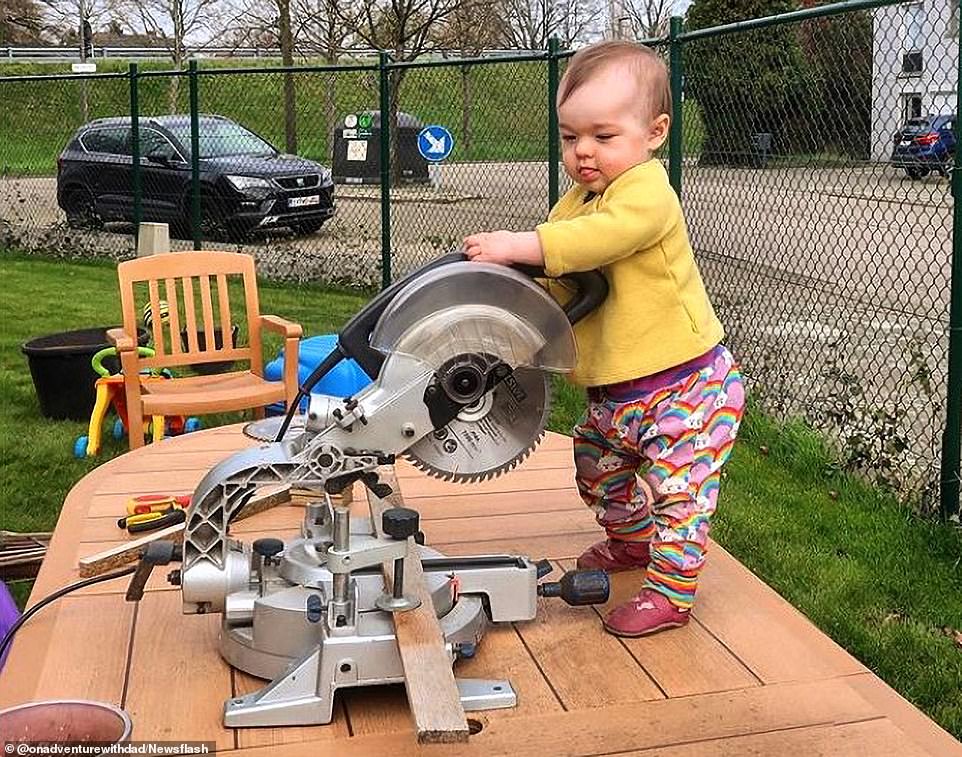 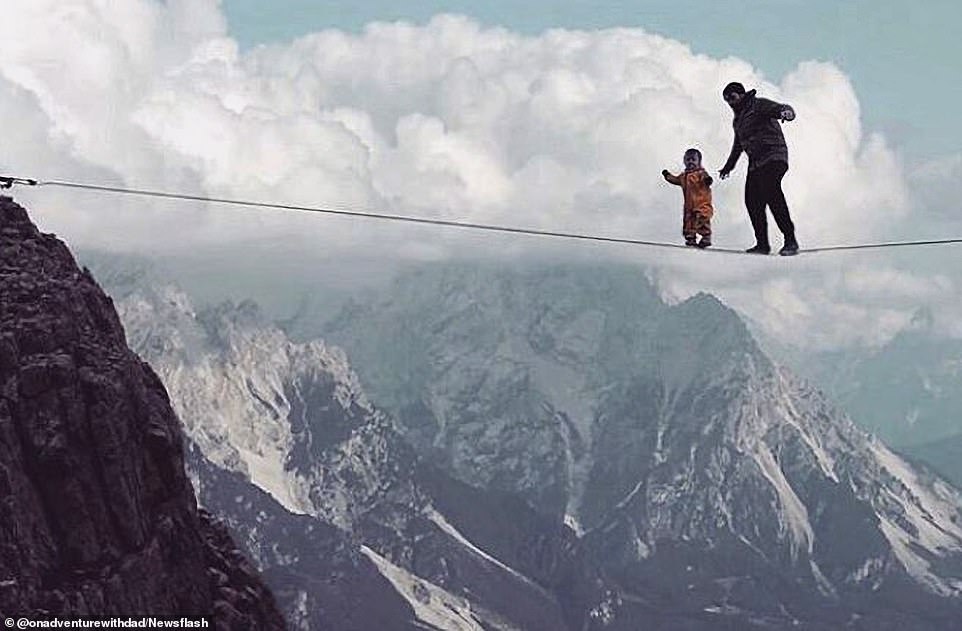 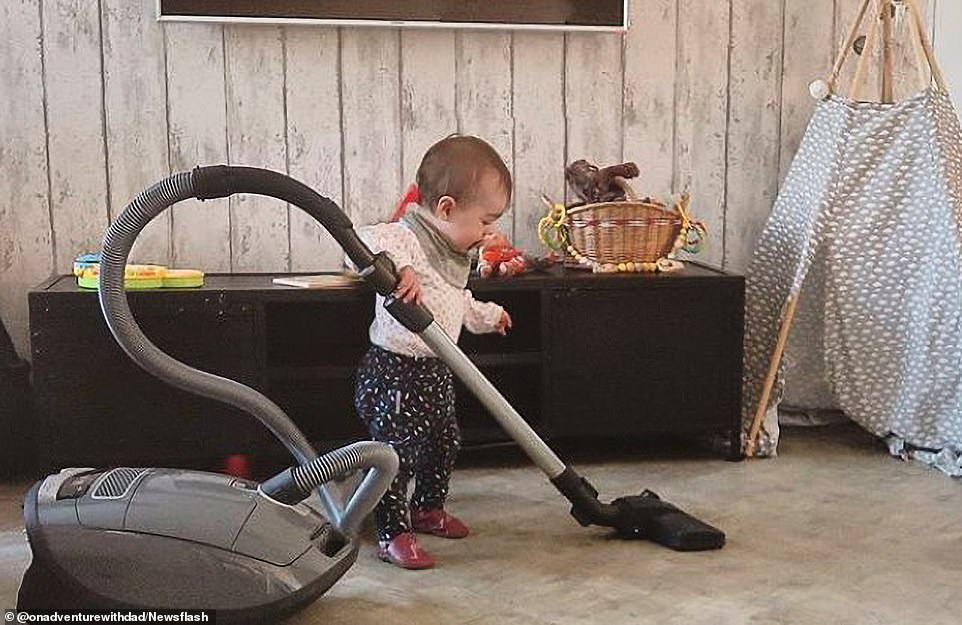 Kenny said: ‘When we had our daughter and my girlfriend had to go back to work, she messaged me all the time to send photos so she knew Alix was safe.

‘Then I decided to make something fun out of it. I always photographed our daughter in different dangerous situations.’

Some of the hilarious edited pictures show their daughter holding a drill, operating a circular saw, putting her hand in a plug socket, walking across a tightrope over a ravine, climbing a fridge and holding a shotgun.

Other images also show her carrying out chores such as hoovering the floor. 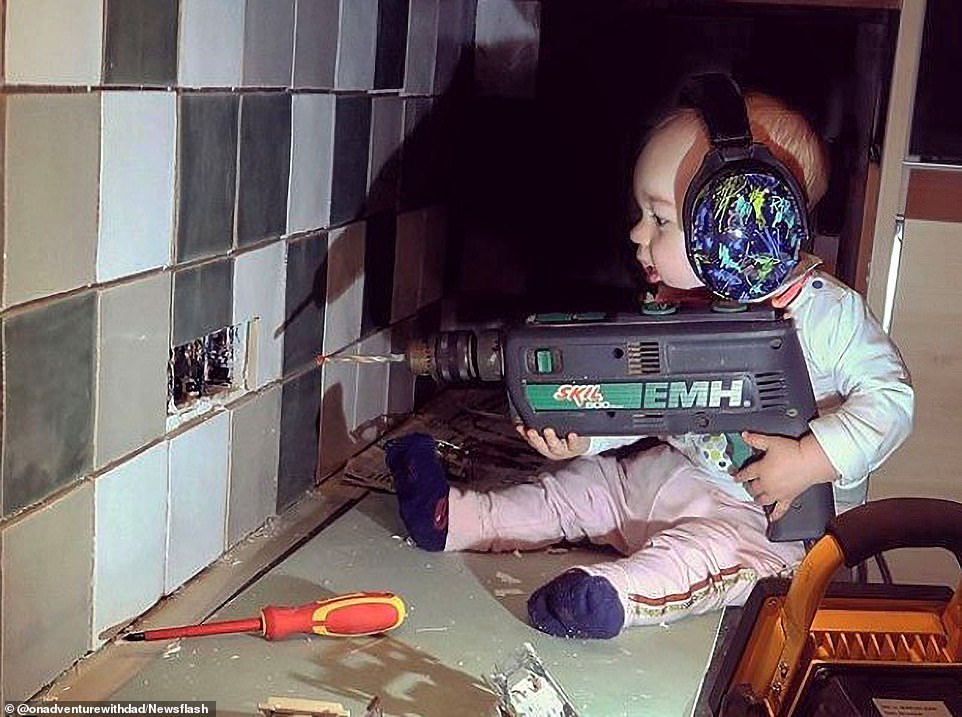 In one hilarious image, Alix is seen holding a large power drill up to a tiled wall with only ear muffs on to protect her 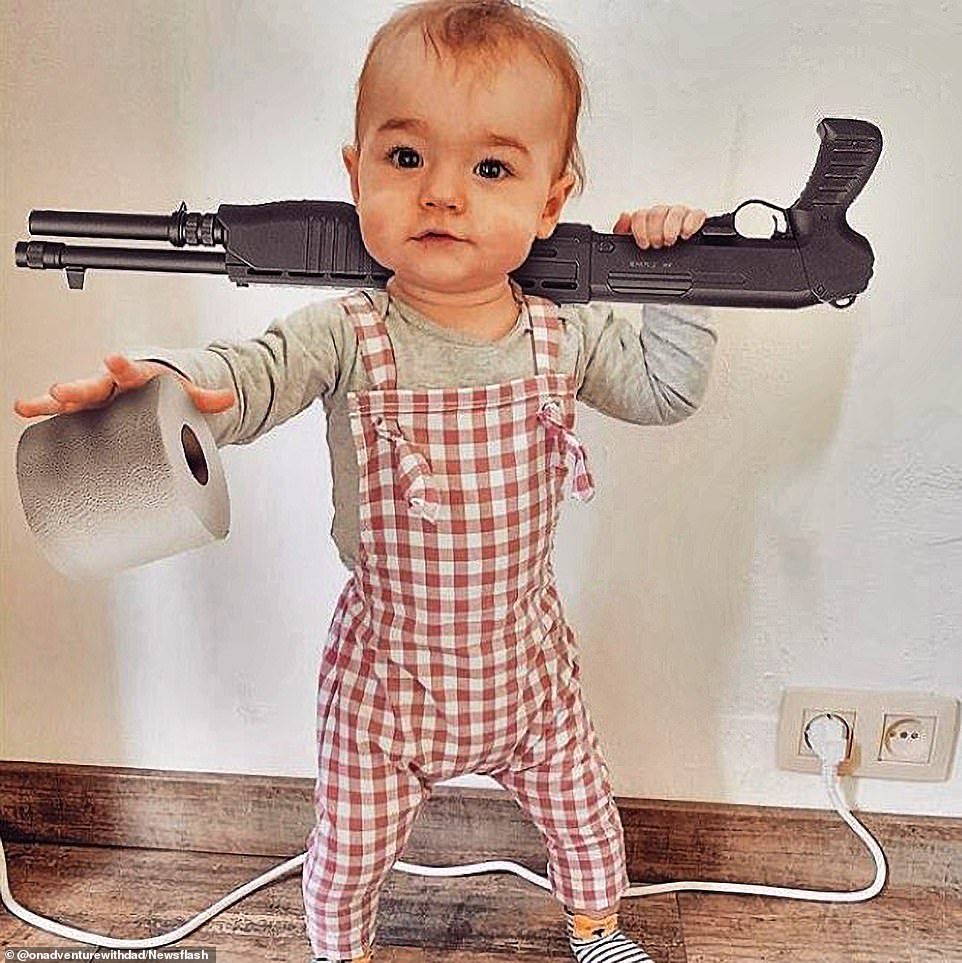 I’ll be back! In this funny photo Alix is seen holding a toilet roll in one hand with a gun in her other one slung over her shoulder 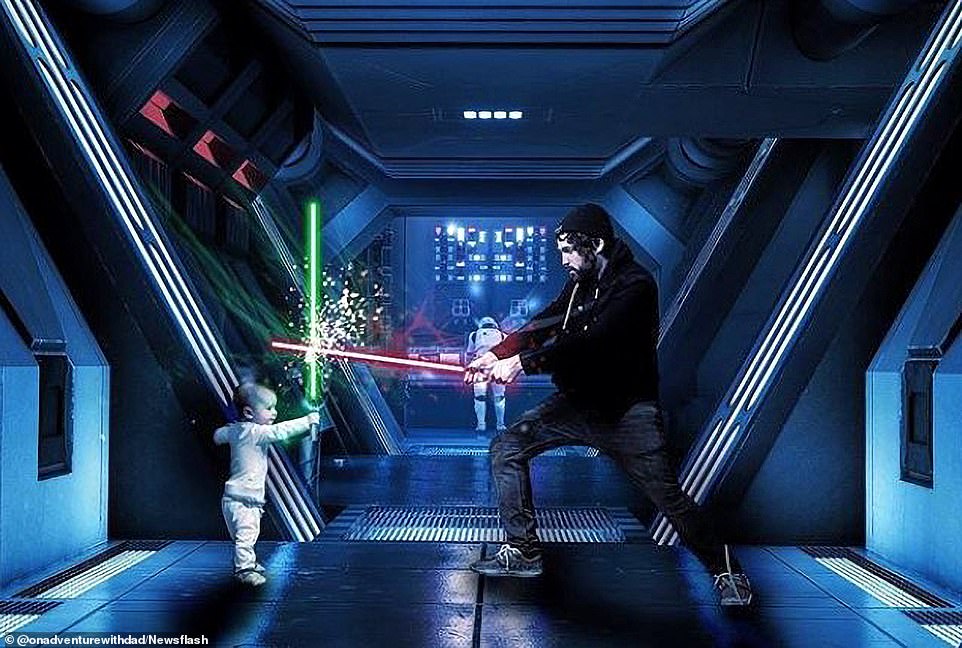 I am your father: In this sci-fi throwback Alix and Kenny work out their issues in a lightsaber battle in a scene not out of place in Star Wars 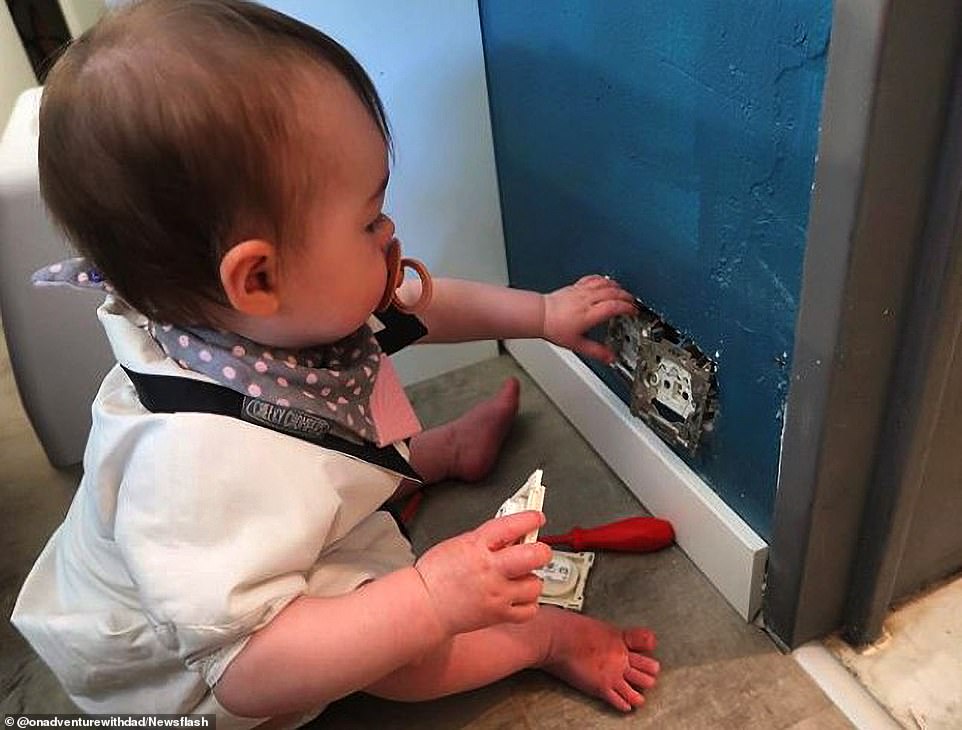 To create his pictures, Kenny said he holds Alix in certain poses and positions before chopping himself out of the photos and then editing in background details

Kenny shared the photos on Instagram with the disclaimer: ‘To be clear, all photos have been edited.’

Kenny is responsible for organising concerts and other activities for a local youth centre, but as he does not have much work due to the COVID-19 pandemic, he decided to take up a Photoshop course.

Kenny said. ‘My partner thinks it’s brilliant. The first time she probably doubted whether it was real or not. Usually, I take the photos in such a way that it is just a bit too over-the-top. But it is the intention that makes you have doubts.

‘I now take a picture every week. In many photos, I just hold Alix and then chop myself off. Then I add a specific background to create a dangerous situation.’