I’ve always been into the weirdest of weird when it comes to spirituality because I’ll try anything to save me from myself. So when I tried astral projection for the first time, I was willing to throw doubt, reasonability, and every practical thought to the wind. Astral projection, if you haven’t heard of it, is a kind of meditation that goes beyond just focusing on your breath, and sort of combines meditation with hypnosis, allegedly allowing someone to leave their body and travel to the outer reaches of the galaxy. It’s what Ambrose does in Chilling Adventures of Sabrina when he leaves his house arrest to go on a date. Of course, that’s more on a dark magic level for the show, but essentially, the concept is the same.

In fact, astral projection is slightly different from just a bunch of breathing exercises. But in order to talk about it, you’ve gotta be about it. So I spoke to Intuition Expert Deganit Nuur, of Nuurvana Clairvoyant Healing about what exactly astral projection is, why it’s useful, what it takes to do it, and what it can be used for. For any unhappy skeptics out there already rolling their eyes, you’re not alone. Sure it’s a little "out there," but isn’t that what makes it interesting? I’m all about trying no things, so you’re welcome to join us, whenever you’re ready.

What Is Astral Projection?

I conducted an interview with Nuur while she was teaching a workshop on astral projection from a beach in Mexico City (#lifegoals). Of course, I asked her the primary question I needed an answer to: What is astral projection? According to her, most people relate to astral projection "in psychology terms, as dissociation."

Now, disassociation in psychology is technically thought of as a defense mechanism, according to Psychology Today — and in extreme cases, can define an actual disorder. According to Nuur, that’s exactly why it should be practiced carefully and intentionally at first. When human beings are confronted by a traumatizing event, "we can do it unconsciously, when we’re not feeling safe… the spirit leaves the body, and projects elsewhere," says Nuur. "When not practiced responsibly, you can lose a sense of authority and seniority over your own body, it can be really disempowering."

Sounds scary, right? But, remember these types of things only happen when astral projecting unconsciously. When practiced consciously and with intention, astral projection can be a meditative tool for healing, says Nurr. She even mentioned to me that she used it to help heal her own familial wounds.

How To Practice Astral Projection Consciously

Hearing about the psychological dangers of unconscious dissociation did make me a little nervous about it. But when you practice this consciously, as a meditation, there is no danger whatsoever. "In the beginning, just learning the right method [involves visualizing] your astral cord," says Nuur, "which guarantees that you can come right back." 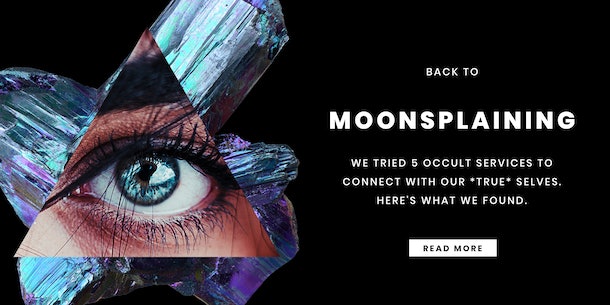 The exercise involves starting off like you would in any other meditation, lying on your back or in a comfortable position, breathing deeply and relaxing your body.

The Effects of Astral Projection

Full disclosure, I was in and out of the meditation, but there were moments when I was fully in it and actually having the most fun I’ve ever had meditating, which I typically find boring AF.

Once I was relaxed, Nurr asked me to picture the astral cord extending out of my third chakra out into the astral plane, which according to Nuur, is comprised of 12 layers, although she mentioned that different people teach different things. She then led me through a visualization where my spiritual body lifted itself out of my physical body, and traveled through that third chakra through every layer of the astral plane.

To be fully honest, my experience in the meditation was that once I felt my spirit body leave my physical body, I felt it shoot all the way out into the astral plane within seconds. The problem was, I could hear Nuur still guiding me through the meditation, describing my soul body as "floating inches above my physical body," when in fact I was already feeling completely weightless, out of my body, all the way out in the astral plane. But frankly, that didn’t last long. The total experience lasted an hour, and I’d say about 50 of those minutes were of me coming in and out of it, as my thoughts kept bothering me about whether or not I was moving too fast for the meditation. As Nuur took me through each level of the astral plane, I’d felt like I didn’t care, and that I wanted to get to the upper layers, which I felt I’d already been drawn to in the beginning. In the moments when I was really able to be present, what I visualized was a scene similar to driving through New York on an EXTREMELY foggy night, with beams of light passing me by, seemingly out of nowhere. Or, if you ever opened your eyes underwater, it was a lot like that.

I wouldn’t say that going in and out of the meditation ruined the whole experience, but if you’re going to try astral projection, the best way to do it is like any other meditation: to practice. The more you practice, the more you’re able to let go of the conscious mind’s attachments. In my case, I learned that my mind is specifically attached to following rules, structure, and logistics. But the more practice I have meditating, the easier it becomes to let go of that hangup.

What I Learned From Astral Projection

I felt an immediate relief in my physical body as well. It felt like the sensation you feel in your feet when you take off a pair of KILLER heels, but throughout my entire body. Or when you’ve been suffering from a ton of tension in your back and your friend walks by and rubs your shoulders unexpectedly.

Balancing the speed at which my spirit moved and the pace of the exercise became my struggle through the meditation, but in the minute or two that I was fully ingrained in it, I could see immediately how this could be used as a tool to heal past wounds, to enlarge your spiritual life, and to develop a relationship with your own intuition.

All the guilt, shame, rationalizations, and worry that are part of the human experience became as small as they do when I look into my dog’s eyes. I realized, on some level, that if traveling through my belly button into outer space can feel so real, then maybe whatever it is I’m experiencing on earth is just as intangible. In other words, that we’re all spiritual beings having a human experience, rather than human beings having a spiritual experience.