I have a confession: I recently became so enraged by some trivial domestic matter that I kicked a huge dent in the kitchen bin. Yes, it was in front of the children. No, I can't remember what provoked such displeasure. I can't even recall if my husband was the cause, though the poor bin won't forget in a hurry.

Every time I notice it, I wonder whether I have traumatised my kids. It can't have been healthy for them to see me – their usually calm and controlled mother – unleash an explosion of rage. 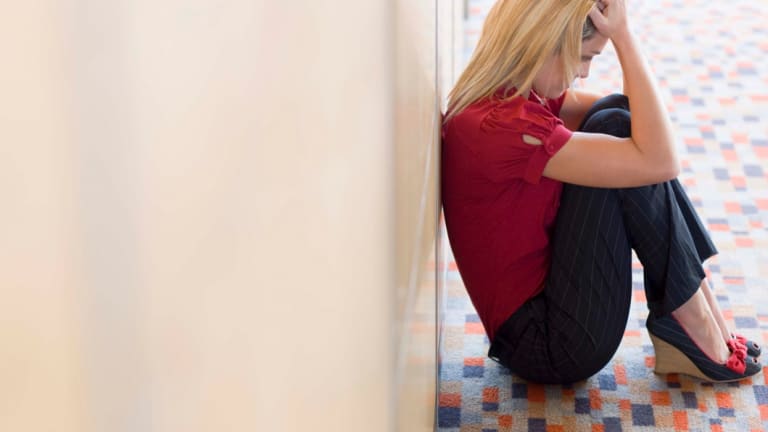 Every time I notice it, I wonder whether I have traumatised my kids.

Except, thankfully, it turns out it can be. New research has suggested that it's better to express negative emotions around our children in a healthy way than to bottle them up – and this includes allowing them to see "healthy conflict".

"Children pick up on suppression, but it's something a lot of parents think is a good thing to do," says Sara Waters, assistant professor in the Department of Human Development on the Washington State University Vancouver campus.

"Kids are good at picking up subtle cues from emotions. If they feel something negative has happened, and the parents are acting normal and not addressing it, that's confusing for them. Those are two conflicting messages being sent."

It's not quite carte blanche to let rip at your partner any time they do something mildly annoying. But it does mean we needn't stay entirely buttoned-up either. So what is an acceptable way to clash with your partner in front of the children – and what isn't?

The best course of action, says Waters, is to let them see a healthy conflict; from start to resolution. "That helps children learn to regulate their own emotions," she explains. "They see that problems can be resolved. It's best to let the kids know you feel angry, and tell them what you're going to do about it to make the situation better."

The resolution she has in mind does not, I daresay, involve kicking a bin. So what can you do when the red mist descends? Faced with rising levels of rage, experts advise blaming the situation, not the person. That's harder than it sounds, because there's nothing more satisfying than taking out your ire on an individual (or inanimate object).

But, says clinical psychologist Linda Blair, doing so can suggest to children that there's something inherently "not good" in the person at the receiving end.

"If parents are fighting [they should not] say 'you're stupid, you don't get my point, you don't understand'. It [should be] 'this is a sensitive issue and we're going to have to find a way to work together to get through this'," she explains.

Blair also counsels against saying something is "impossible", "stupid" or "too hard". "Instead say 'this is a real challenge', or 'boy, is this going to make us think hard'. That way you suggest the possibility of resolution."

Language is also crucial when expressing anger – and neither parent wants to be responsible for turning the airwaves blue. But, let's be honest, a bit of light swearing around (rather than at) your children is unlikely to leave them scarred.

In his 2016 book What the F: What Swearing Reveals About Our Language, Our Brains, and Ourselves, Benjamin K Bergen, a professor of cognitive science at the University of California, writes that, "Children's minds are resilient to profanity."

That said, you should probably avoid dropping the F-bomb, as we all know how readily our children pick up on and copy what we say. Not something you want to have to explain away at the next parents' evening.

Blair advocates doing whatever it takes to turn the temperature down – short of kicking the bin.

"When we're emotional, we don't think creatively," she says. She advises parents to set an example by saying, "let's sit down and have a cup of tea, or do some breathing, or have a walk around the block. If you can be rational you will arrive at a better resolution."

And if you're still in the middle of an unresolved row? It will enable you to come back and offer up something more conciliatory and constructive. "You may say, 'we still disagree, we've got a problem. We need to find a way through'."

Of course, there is one easy way through this minefield. Sorry might seem the hardest word, but it's a vital one. Something along the lines of "I owe you an apology, that was not good behaviour," should suffice, says Blair.

So if you've hurled out a stream of invective at your partner, a meaningful apology in front of your children should help put a lid on the whole thing. If it will still shut after you've kicked it, that is.