Jane Seymour, hair wrapped in a towel, is saying goodbye to her character's family as they leave for work and school in the morning.

It's a scene from a new Australian film, the drama Ruby's Choice, that is both straightforward and exceptional at the same time. 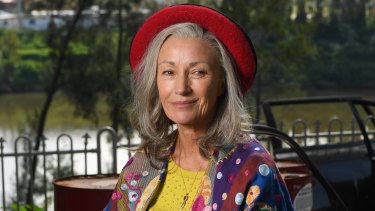 Jane Seymour on the set of Australian film Ruby’s Choice which is shooting at Windsor. Credit:Nick Moir

Director Michael Budd, who was inspired to become a filmmaker after spending almost 300 days as Laurence Fishburne's body double while shooting the Matrix trilogy in Sydney, is still watching his actors closely and calling "cut" from behind a monitor.

But all around them, at an historic house at Windsor on Sydney's outskirts, are signs of the challenge of shooting a film during a pandemic.

The crew are all wearing masks. A COVID-19 safety marshal calls "distance please" whenever anyone gets too close to someone else. It's her job to remind them to adjust any masks that slip. 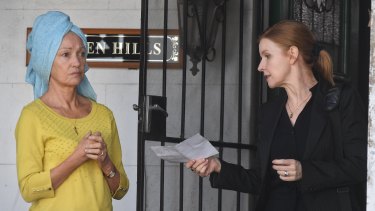 After being tested for coronavirus, the crew have their temperatures checked twice a day, hand sanitise regularly, eat packaged rather than buffet food and stay in a separate "bubble" to the cast.

The actors – headed by Seymour as Ruby, a loving grandmother with Alzheimer's Disease – can take off their masks during scenes.

When the pandemic struck, Budd had to delay the shoot and switch location from Brisbane to Sydney where many key cast and crew live. He said the COVID-19 restrictions made the shoot more difficult and more expensive but was grateful that it was possible.

"I made a decision very early that we weren't going to risk state-by-state lockdowns," he said. "Providing we can keep it very tight and stick to the guidelines that have been sent out to us, we'll be in a good position."

Budd, whose grandmother died from dementia, pulled off a coup when the Glenn Family Foundation, founded by Indian-New Zealand philanthropist Sir Owen Glenn, agreed to put up the entire budget for the film because of its subject. 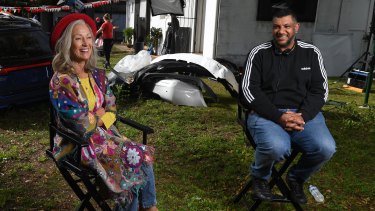 'To start a conversation about dementia is something I've been passionate about for a long time," he said.

He felt "blessed" that Seymour had been willing to go through two weeks in quarantine after arriving from Los Angeles.

"She's not one of these Hollywood high maintenance people," Budd said. "She's in the make-up chair 15 minutes out, she hangs out with the crew, she eats with us and she gets to know everybody on the set."

Seymour also has a personal connection to the condition.

"Two uncles both died from Alzheimer's,"she said. "It was just devastating to see people that bright, that smart, go down the rabbit hole basically."

Far from being upset about the COVID restrictions, the British-American actor best known for Live and Let Die, Dr Quinn, Medicine Woman and The Kominsky Method, was grateful for what the federal and state governments had done to limit the virus' spread and allow the film to shoot.

"I've been involved with helping caregivers and also trying to find a cure for Alzheimer's," she said. "I don't think there's anyone I know that hasn't been touched by dementia or Alzheimer's and hasn't known how to deal with it."

Seymour, 69, also has projects lined up in Spain, Ireland and the US.

"Of all the categories of actor to be working this much during COVID, the last one you'd think of would be a woman turning 70," she said. "My agent laughs and says 'I can't believe it, you're the only one working'."