To get a sense of the remarkable rise of US pop phenomenon Lizzo, one could start with the cold, hard numbers.

In November, when tickets went on sale for her coming one-off shows in Sydney and Melbourne (she’s also performing nationally as part of FOMO Festival next week), the gigs sold out within minutes. 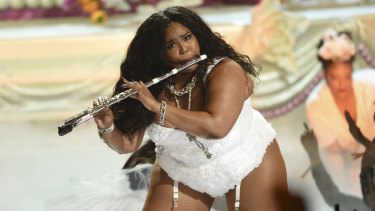 Her coming gigs in Australia sold out within minutes, but who is Lizzo and why is she so popular?Credit:Invision

The Sydney Opera House, whose Concert Hall fits about 2000 people, later announced that 12,000 fans were still in the queue trying to get pre-sale tickets at the time its allocation was exhausted. On Viagogo, tickets for her show at Melbourne’s Forum were reselling for more than $2000. Such is the demand for the 31-year-old R&B singer and rapper, born Melissa Jefferson, who arrives in Australia for her first tour after being named Time’s Entertainer of the Year in December. But why exactly is she so popular?

“Lizzo is a star because she’s real," says Sarah Thomas, head of press and communications at Warner Music Australia, who handles local operations for Lizzo's Atlantic Records. “She has exceptional talent, is a beautiful human being, is bold and funny. People connect with her realness and authenticity.”

“Musically, there isn’t a lot being released at the moment that is genuine, loud, brash and authentic, and there is a desire for that among people,” he says. 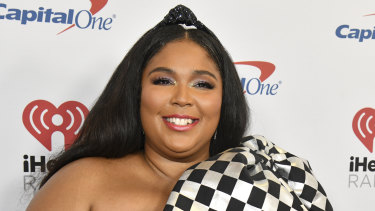 Lizzo is touring Australia this week.Credit:Invision

Ironically, the singer’s success was overdue, fuelled by viral serendipity.

Her breakout single, Truth Hurts, topped Billboard’s Hot 100 chart in September, almost two years after its original release, rediscovered after it was prominently featured in the Netflix romantic-comedy Someone Great.

Good As Hell, another sleeper originally released in October 2016, was certified gold (35,000 copies sold) in Australia in December, while Juice, the infectious lead single from album Cuz I Love You, released last January, completed her unlikely resurrection.

“You have to understand, we are celebrating her success at the moment but all her hits are two or three years old, she is not an overnight success,” says Smallzy. “I was playing her song, Juice, in nights eight or nine months ago; we knew it was a good song but couldn’t get it going.”

Of course, the music’s one thing. Lizzo’s other appeal lies in the force of her personality.

At last June’s BET Awards, she interrupted a gyrating performance of Truth Hurts for an impromptu flute solo (yes, she’s also a classically trained flautist), to a raucous standing ovation and the approval of a beaming Rihanna.

In August, performing in front of a giant inflatable butt and stripping down to a bright yellow bodysuit, her onstage energy stole the MTV VMAs from other high-profile performers, including Taylor Swift and Shawn Mendes.

In its review of that performance and her outspoken body-positive attitude, a rarity in “the narrow parameters of slim white womanhood set out by the music industry”, The Guardian labelled Lizzo the “feel-good superstar everyone needs”.

“A much-needed soupcon of self-esteem, wicked humour, and the occasional twerking ass balloon,” it continued.

“Lizzo has found success because she doesn’t present as a typical pop star,” says Smallzy. “She is relatable and she reads exactly as she is … She doesn’t worry about what people think and is doing what people would want to do, and it’s appealing.”

Her raw antics and increased pop star visibility have, however, also threatened to land her in trouble.

In October, she was accused of lifting Truth Hurts' signature opening line – “I just took a DNA test, turns out I’m 100 per cent that bitch” – from a February 2017 tweet by singer Mina Lioness. She acknowledged the claim and made Lioness a co-writer.

In November, she was sued by a food delivery driver she had named and shamed on Twitter for allegedly stealing her food. After a backlash, she apologised for “putting that girl on blast” and promised to “be more responsible” with her social media use.

Speaking to Time in December, she noted she was working through the newfound pressures of celebrity in therapy. “I didn’t want to be famous,” she told the publication. “I wanted to be like Brandon Boyd from Incubus! I just want to go to the farmers’ market.”

While they threatened to derail a career that’s hit a sudden peak, Lizzo sustained the controversies to the point that 2020 promises more spoils. At next month’s Grammy Awards, she’s bagged a field-leading eight nominations including best album, song and new artist of the year.

The fact she’s touring Australia at such a career high is a score for local fans who managed to land a ticket to her shows.

“I saw her at Coachella earlier this year and honestly, the second she walked on stage I knew we were watching the next big superstar,” says Thomas.

“She owned the stage and the performance and I’ve never seen a crowd move and sing along like that – people felt free and joyful, with no inhibitions. It sounds cliché to say, but her music honestly brings everyone together.”