When this photograph was taken, I had no idea who Harper Lee was. She briefly came to LA in 1962 to visit the film set of To Kill a Mockingbird and this was one of the press photos. She was 36 and I was nine, playing the protagonist, Scout [a role for which Badham received an Oscar nomination]. I had not read the book, nor the script in its entirety. Lee seemed perfectly nice, and at that age that was all I needed to know. 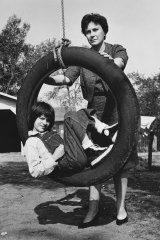 ‘As I’ve grown older, one thing I’ve noticed is that myself and Lee and Scout are all similar.’Credit:Getty Images

For decades we’d exchange pleasantries at events. It wasn’t until she was in the nursing home where she would spend several of her final years that we properly bonded.

The first time I visited her was three years before she died [in 2016]. She looked me dead in the eye and said, “Young lady, don’t you ever come to my home town and not say hey to me.”

I had been regularly visiting Monroeville [in Alabama] to speak at the play of the book, which they put on annually. Eventually, Lee’s minister, Reverend Butts, asked me to accompany him to see her. I’d assumed she wouldn’t want to see me, which evidently wasn’t the case.

We’d spend much of our time together reminiscing about Gregory Peck, who played Atticus Finch in the film. Before his death in 2003, he was like a father to me. Both of my parents passed away while I was still fairly young and the Mockingbird family filled a part of that void.

Lee was fond of him, too, even gifting him her late father’s watch. [Atticus Finch, a small-town lawyer, was loosely based on Lee’s father.]

Funnily enough, despite Mockingbird being an exceptional part of our lives, we never spoke about it. It upset her. Once, a family member came with a copy of the book to be signed. She was sitting out front and screamed for me to take her back to her room.

It had taken over every aspect of her existence and, in her old age, in the poor health she was in, it had finally taken its toll.

We did talk about other books, though. Despite having poor vision, she made an effort to read. The last book I gave her was Judi Dench’s memoir, And Furthermore. I thought it was hilarious and wanted to know her opinion. But when I returned, visitors were no longer allowed to see her, including her minister. I was heartbroken.

I didn’t read Mockingbird until I had my daughter Anna [now 36], and as I’ve grown older, one thing I’ve noticed is that myself and Lee and Scout [a character based on Lee] are all similar.

I was never the prissy little girl that my father wanted me to be. Rather than let him braid my hair with ribbons, like he did with his sisters as a child, all I wanted was to be outside or making forts with my brothers.

But the best thing about To Kill a Mockingbird will always be how its message on civil rights manages to stand the test of time. It’s as important today as it was back then.

This article appears in Sunday Life magazine within the Sun-Herald and the Sunday Age on sale March 15.