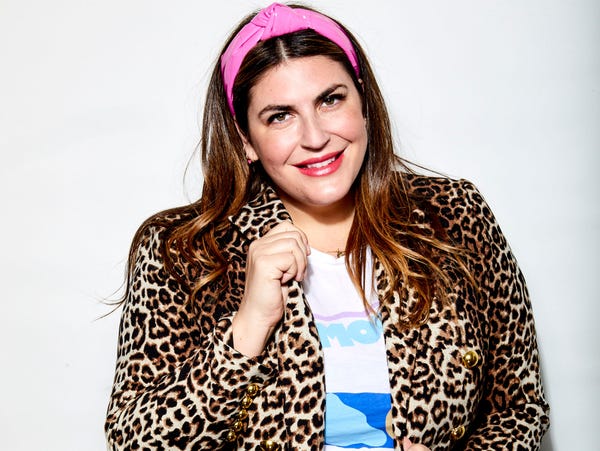 Six years ago, while Katie Sturino was working in fashion public relations, she was asked to appear in a Repeller article about dressing for curvy body types. It was a perfect fit, she said, because she considers herself to be a body acceptance advocate.

After the story came out, Sturino heard from readers who said they had never seen a body like hers on a fashion blog. It sparked the idea for what would become her blog, 12ish Style, named for her own size — she fluctuated between a size 12 and 14, and wanted to address people who, like her, fell in between straight sizing and plus-size.

The goal of the blog, she said, was to spread awareness about body acceptance.

"I didn't have representation, so I became the representation," Sturino told Insider. "It's been my 'aha' moment because it's allowed me to tap into helping women. When you're in the mindset of being of service to other people, you never really feel like you're working, and that is how I feel most of the time."

Years later, this attitude led her to found Megababe, a line of personal hygiene products that address issues like chafing and sweating.

Growing up, Sturino knew she wanted to be a fashion editor and work at a magazine in New York.

"I always cared about what I was wearing. I loved all of the 90s models, like Niki and Krissy Taylor, Linda Evangelista, Stephanie Seymour, Naomi Campbell," she told Insider.

Sturino was born and raised in Wisconsin and stayed in state to go to the University of Wisconsin. She got her first internship at Chanel after flying herself out to New York and repeatedly emailing the person in charge. After interning there for two summers, Sturino got a job in Dolce & Gabbana's public relations department right after graduating.

But seeing models like Seymour, Campbell, and Evangelista in magazines was hard for Sturino. She didn't look like them, which she tried to change for years until she realized she didn't have to.

"It took me a really long time to untrain myself from thinking that way, embrace myself, and empower others to do the same," she said.

In 2005 she launched her own public relations firm, Tinder PR. She eventually left PR behind and launched her blog in 2015.

Going from being behind the scenes to being an influencer was initially hard for Sturino.

"It was really hard for me to feel that people would even care what I was saying," she said. "Even taking a selfie or talking about what I was doing was so lame for me at the time. It was hard to get over that hump but I did because now I talk about everything. I'm very honest!" she said.

Sturino later started two features, #MakeMySize and #SuperSizetheLook, on both her blog and Instagram.

For the former, Sturino tries on the biggest sizes that a brand has to offer to show them they still have a ways to go to be size inclusive. The latter series involves recreating a celebrity look on her frame. (Her favorite looks to draw inspiration from, she said, are Kate Middleton's.)

Sturino was familiar with difficult conversations about size inclusivity, and on Instagram, she openly talked about body topics like thigh chafing, boob sweat, and body odor. It helped inspire her to found Megababe in 2017.

At the time, she was looking for a holy grail product that would solve thigh chafe and also had clean ingredients. Her hunt led her to create Thigh Rescue, an anti-chafe stick that has gone on to become a top-selling product for the brand.

The line has since expanded to natural deodorants, a clarifying butt mask, an anti boob-sweat powder, and a detoxifying underarm mask.

"Rather than being like, 'Here's this shameful problem that you think you're the only one who has it because you haven't heard about it on a beauty column,' let's change that narrative and invite everyone in and have fun with it," she said of the company's name.

The biggest surprise so far, she said, is people who doubt the necessity of her products, partly because they didn't want to admit that chafing was a problem. She got negative feedback from manufacturers and even friends, she added.

"It took a long time for beauty editors to stop snickering at what I was talking about or even to get on board. It was such a difficult concept for people to grasp even though it's such a common thing," she said.

Sturino said it blows her mind that people still want to put her products into a box and stamp the brand as niche.

"Unless I'm misunderstanding the word niche, we're like the least niche thing you can be. People think I made a really specific type of product for only 100 people in the world, which is just not the case," she said.

Sturino told Insider the next product that Megababe plans to release will be in the antibacterial space, because the hand sanitizer it brought to market during the pandemic sold well.

Given her busy life — she runs Megababe, 12ish Style, and partnerships with brands — it's easy to imagine how she might get overwhelmed. But she credits her team with letting her run wild with ideas while still reeling her in when necessary.

"I think that's what an entrepreneur is, because I'm someone that can't stop coming up with ideas and pursuing things," she said. "[It] can be trying for the people around me, but I just think we have so much to do."